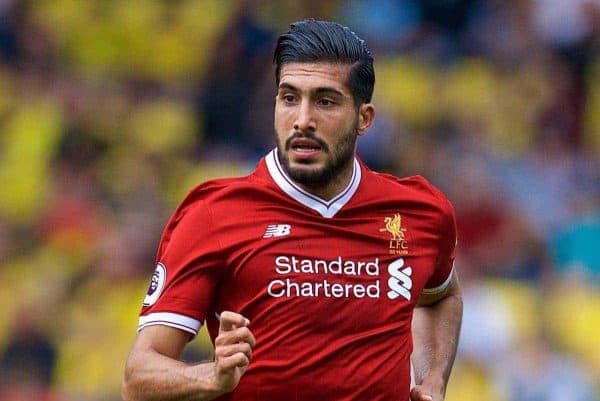 Emre Can reveals he is still in contract discussions with Liverpool

Liverpool midfielder Emre Can says he has not signed a pre-contract with Juventus and is still in discussions over staying at Anfield.

The German international is out of contract at the end of the current campaign and rumours have been rife that he will depart on a free transfer.

Italian side Juventus have been named as the front-runners for his signature, though other clubs including Bayern Munich have also been credited with an interest.

But Liverpool have remained hopeful all along of convincing their No. 23 that his future should remain at Anfield, and Can appears to still be open to the prospect of staying.

“My agent is looking after everything but I am here until the summer,” Can said.

“I haven’t signed anything (with Juventus) or anyone. I am talking with everyone.

“Of course I am talking with Liverpool. I still have a contract here. It is an amazing club.

“What can I say? My agent does the rest.

“I just concentrate on the season, on my performance and the football. I will give everything for this team.”

While his words aren’t quite the 100 per cent guarantee he’ll remain beyond 2017/18 that some fans might have hoped for, it’s at least still a possibility.

Earlier reports had suggested Can had already signed an agreement with Juve—but his performance against Manchester City on Sunday showed a remarkable commitment to the cause, having been ill in the run-up to the fixture.

Can was a star performer in midfield as the Reds won 4-3 to end City’s unbeaten run and hailed the display of the team.

“It was unbelievable!” he added.

“Look at how we pressed, I think it was the best game. We played against Manchester City, you don’t have to forget that!

“We were always on the front foot, everyone pressing and everyone doing a brilliant job.”

Can will remain a key part of Jurgen Klopp‘s plans until the end of the campaign, it seems, and from then on it could come down to exactly what the Reds can offer from a football perspective as much as financially.

For most fans though, his display as the deepest midfielder means he’s a must-have in the XI as the No. 6 as the Reds seek to secure another top-four finish and progress in both the FA Cup and Champions League.