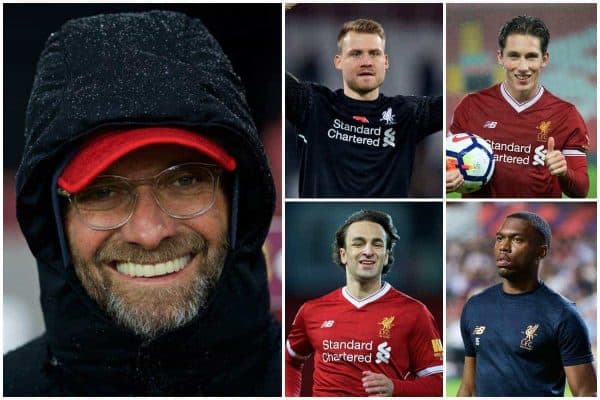 With just one week to go until the end of the January transfer window, what business can we expect from Liverpool over the next seven days?

Largely, their form has maintained throughout the month, too, though Monday night’s 1-0 loss away to Swansea City ended a long, 18-game unbeaten run.

That defeat has prompted calls for further reinforcements between now and deadline day on January 31, while speculation remains on the futures of some of Jurgen Klopp‘s players.

Here’s what to expect from Liverpool as the winter window enters its final week.

Coutinho’s £142 million move to Barcelona was a major setback for the Reds, with Klopp losing arguably his best player midway through the campaign.

The Brazilian may not be the only player to leave on a permanent basis before the end of the month, with some fringe figures likely seeking the exit.

Most prominently, that comes in the form of Simon Mignolet, who has been replaced by Loris Karius as Klopp’s first-choice goalkeeper.

This prompted swift links with a move to Napoli, and while Mignolet was still on the bench on Monday night, a switch to Italy could be possible.

Elsewhere doubts loom over Lazar Markovic, who has been in Klopp’s matchday squad on just one occasion this season, that being as an unused substitute in the League Cup.

The Serbian is on Spartak Moscow and West Brom‘s radar, and has attracted interest from Watford, Hull City and clubs in Turkey in the past, and given his lack of game time on Merseyside it could be that a departure is in the offing.

Another player whose future at Anfield is seemingly set in stone is Adam Bogdan, with the goalkeeper having worked his way back from an ACL injury to find himself out of the picture.

Whether any club is willing to gamble on the Hungarian at this stage of the season is unclear, but don’t rule out a move.

And in Liverpool’s academy ranks centre-back Lloyd Jones has no future and could leave, with Bolton Wanderers, Wigan Athletic, Bradford City and Oxford United all interested.

There are also likely to be a clutch of players to follow Corey Whelan, Matty Virtue, Marko Grujic and Ryan Kent to leave on temporary deals over the coming days.

Daniel Sturridge is the most high-profile name expected to depart on loan, as while Liverpool would be more open to a permanent exit, the interest in a £30 million deal is slim.

Inter Milan have already approached the Reds over a move, while both Sevilla and AS Roma have been mooted and West Brom, Newcastle United and West Ham were all linked in the past.

The future of Mignolet could have an impact on the prospects of Danny Ward, with the Welshman in line for a promotion to second-choice goalkeeper if his elder counterpart leaves.

But if Mignolet stays it may be the case that Ward is permitted another loan move, with his opportunities under Klopp limited.

Jon Flanagan has been made available for a six-month spell, though whether any club will come in for the 25-year-old is unclear following his sentence for assaulting his girlfriend.

Both Ovie Ejaria and Harry Wilson could be in line for the exit, though Liverpool are reportedly eager to tie the academy pair down to new contracts before allowing them to leave on loan.

Young goalkeepers Kamil Grabara and Shamal George, midfielders Yan Dhanda and Paulo Alves and striker Toni Gomes could also be among those to move.

One player who is not set to depart on loan, however, is Ben Woodburn, with a proposed switch to Sunderland thwarted following Coutinho’s departure.

Klopp’s decision to rely on the likes of Woodburn, Danny Ings and Dominic Solanke in the aftermath of Coutinho’s move to Barcelona has led to criticism from the stands.

Losing a player of the calibre of Liverpool’s former No. 10 is a considerable setback, and the majority of supporters had hoped for a replacement.

As it stands, however, Klopp is not looking for another big-name signing between now and January 31, insisting last week that “we had our ‘big’ transfer in this window.”

But the 50-year-old did add that “if something jumps in my face then maybe we think about it,” suggesting that if an existing target becomes available Liverpool could swoop.

The marquee name in that respect is AS Monaco midfielder Thomas Lemar, who was already the subject of a failed bid from the Reds last summer.

Monaco have publicly stressed they are not looking to part ways with the Frenchman at this stage of the season, but the hope will be their stance shifts over the next week.

Leicester City winger Riyad Mahrez was touted, but claims were swiftly rejected, while Bayer Leverkusen’s Julian Brandt is expected to sign a new deal with this club.

Rule out an early move for summer arrival Naby Keita, too, with RB Leipzig adamant he won’t be leaving for Anfield until July.

But could a surprise name still emerge on Liverpool’s radar before deadline day?