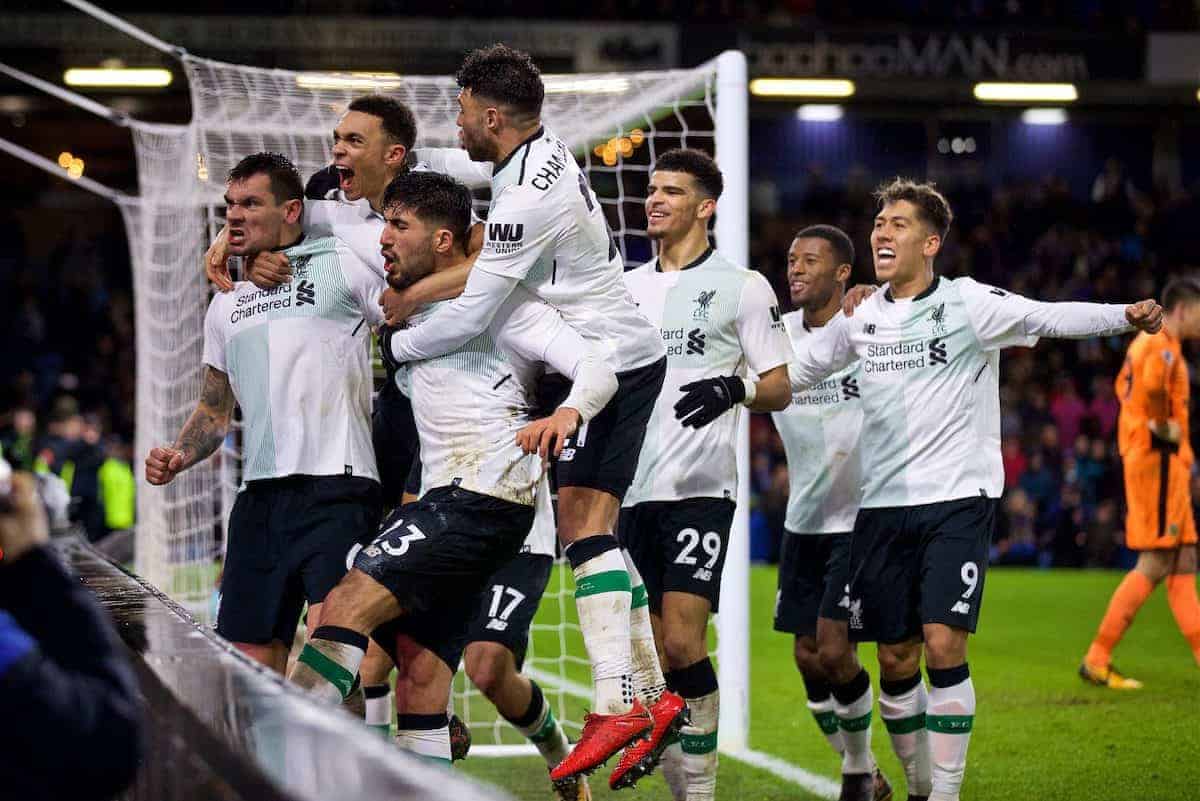 Liverpool’s late 2-1 victory away to Burnley on New Year’s Day, and another three points, provided Jurgen Klopp‘s side with the perfect start to 2018.

The Reds looked set to hold on to their one-goal lead when Johann Berg Gudmundsson cancelled out Sadio Mane‘s stunning opener by diverting the ball home on 87 minutes.

But with Liverpool determined to kick off the year with a victory, the two most unlikely of heroes combined to salvage the result.

With the influential Alex Oxlade-Chamberlain curling a free-kick into the Burnley area late on, Dejan Lovren nodded the ball into the six-yard box for Ragnar Klavan to convert and make it 2-1.

The Reds’ second game in just three days brought their second win, and as Klopp prepares for Friday’s FA Cup third-round clash with Everton the German will be buoyed by their progress.

KARL: The fight, the resolve, the late win!

It’s been a long time since Klopp’s team have looked, or even felt, threatening enough to go out and do the necessary late on in matches and it somehow feels that Burnley was a big place to do it.

Their home form is good, their league position impressive and their defensive stance throughout the 90 minutes—all told, Liverpool did really well to push themselves up and be brave enough to attempt to win.

That’s the most pleasing aspect, the actual attempt to do it, the willingness to go again and do whatever it takes to get that one extra, final, chance.

JACK: As Karl said, the fight and will to win was hugely encouraging, particularly given the performance wasn’t one of the best we’ve seen lately.

There were clear positives on the pitch though, too, notably Oxlade-Chamberlain’s creativity, Mane’s stunning goal and the resolve of Lovren and Klavan to atone for the late concession.

And in a month where speculation is set to mount up over his future, I feel it’s worth sparing praise for Can and his performance as Klopp’s No. 6.

He was strong and well-timed in the challenge, used the ball efficiently from deep and provided a much-needed physicality against a tough opponent.

AIDAN: This Liverpool team have shown in the last two games that they have fight, and can indeed get over the line in key fixtures. The Burnley result was a clear example.

Mane scored an excellent goal, which should help his confidence; Oxlade-Chamberlain played a key part in both goals, as he continues to adapt well to life at Liverpool; and Lallana returned to the side, playing a strong performance. KARL: The performance was obviously rubbish overall, but that was a direct consequence of the opposition/location/weather/rotation, so that wasn’t a particularly bad factor for me.

Instead, perhaps the lack of creative threat or inventive passing from deep was more concerning.

Coutinho can’t play all the time (for various reasons, perhaps, going forward!) so there has to be more of an emphasis on Can, Wijnaldum or whoever else providing quicker, intelligent and accurate passes between the lines.

The forwards weren’t the usual ones, so service became more important and it wasn’t really there.

JACK: It was a pretty turgid display overall, with seven changes in personnel resulting in a disjointed setup that didn’t possess the same fluency as normal.

Whether by design or due to Klopp fielding Gomez at left-back, there was a lack of overlapping support from full-back for the majority of the game, and this put more pressure on the midfield to create.

It looked set to be another off day for Mane, but his goal certainly made up for another sluggish showing, while it just didn’t come off for Solanke, whose first touch let him down. AIDAN: The alternate view is that Liverpool were lucky to win in dramatic fashion in the dying moments of the game.

Another late, preventable goal conceded only supports the case for why Klopp and the club were right to spend £75 million on Van Dijk.

And who should be Van Dijk’s centre-back partner?

KARL: I know many fans want to see Gomez, but it’s not realistic for this season.

I actually feel Lovren would benefit a lot from playing with Van Dijk; he was better at Saints when he had an organiser next to him, Jose Fonte directing matters and orchestrating the entire back four—Van Dijk can hopefully now do that for Liverpool.

Pleasingly though, it should simply be whoever shows most promise as a partner to complement the new arrival.

So let competition for places take its natural course—and get a Matip/Van Dijk combo going against certain aerial bombardment opponents!

JACK: I don’t see Gomez getting any opportunities at centre-back this season, particularly given he wasn’t called upon even when Klopp only had three other options.

So for the short term, at least, I’d like to see Van Dijk paired with Matip, and given their left- and right-sided respectively, I’d expect this is Klopp’s planning.

But with how often Matip is out with niggling injuries, it is heartening to see Lovren improve having shifted over to the right of the centre-back pairing, and I’d have no qualms with him stepping in when required. AIDAN: Lovren and Klavan have been in excellent form as both continue to fight for their places in the side.

However, Matip remains the most competent of the potential centre-back partners.

As for long term, there is in fact a very strong argument that it should be Gomez.

The young defender has been excellent at right-back when called upon this season, and has the attributes to be a great centre-back for the future.