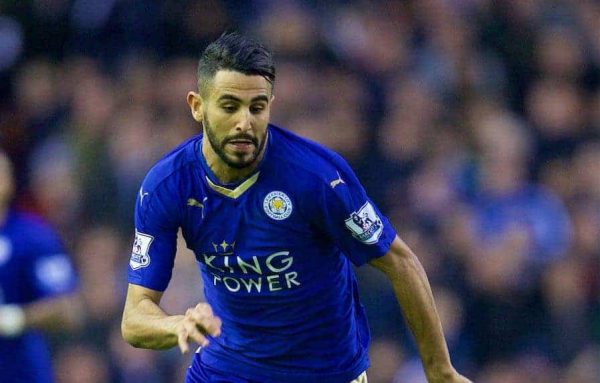 Liverpool have approached Leicester City over the January signing of Riyad Mahrez, according to reports in France.

It was a Friday evening to remember for the Reds, as they overcame Everton 2-1 at Anfield to reach the FA Cup fourth round.

Virgil van Dijk enjoyed a dream debut for his new club, heading home a late winner in front of the Kop and endearing himself to supporters immediately.

Shortly after the final whistle, some interesting transfer news emerged, with French publication L’Equipe claiming Liverpool have made contact with Leicester, with a view to signing Mahrez this month.

With Philippe Coutinho now appearing almost certain to leave for Barcelona, replacements are in order, and the Algerian would be someone who can help fill the void.

The reports claims that Monaco’s Thomas Lemar will also hopefully be brought in, and that Liverpool have planned for Coutinho’s exit well in advance.

An earlier report in the Independent had claimed Mahrez was the backup option to Lemar – which seems odd given their very different positions and styles of play.

Mahrez would be a very exciting purchase by the Reds. The 26-year-old was the creative inspiration behind Leicester‘s incredible Premier League title win in 2015/16, scooping the PFA Player of the Year and African Footballer of the Year awards in the process.

Although his form dipped last season, he has shone this time around, scoring and assisting seven goals, including laying on the opener for Jamie Vardy in Liverpool’s 2-1 win last month.

Fast, skilful and possessing deadly end product in the final third, Mahrez would add a lot to an already potent Liverpool attack.

Some fans are not completely enamoured about a transfer coming to fruition, but it is worth remembering that the respective arrivals of Sadio Mane and Mohamed Salah were not met with great glee either.

Losing Coutinho this month is an almighty blow, and allowing him to leave is certainly a questionable decision, but no player is bigger than the club.

Jurgen Klopp‘s side must push ahead without the Brazilian, and should a deal for Mahrez materialise, they will have a wonderful new talent in their ranks.

The Foxes’ forward’s current contract doesn’t expire until 2020, but it is believed they are willing to let him move on this month.