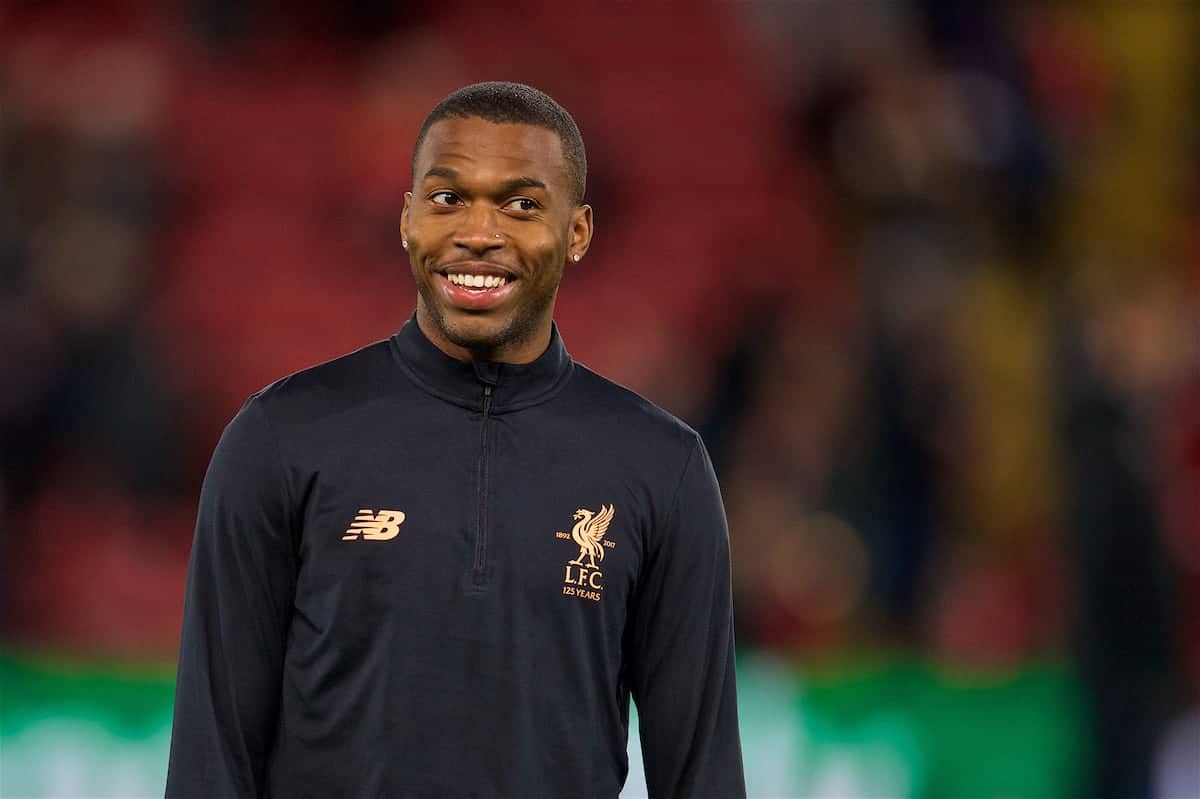 As Liverpool consider allowing Daniel Sturridge to leave on loan this month, the striker’s impact from the substitutes’ bench cannot be overlooked.

At 6pm on Monday evening, three of the Reds’ closest rivals in the Premier League announced major deals for both their immediate and long-term prospects.

Man United confirmed Alexis Sanchez’s switch from Arsenal, with Henrikh Mkhitaryan unveiled by the Gunners as part of a swap deal, while Man City finalised a new long-term contract for Kevin De Bruyne.

In the wake of Philippe Coutinho‘s departure for Barcelona this was a significant development, as Liverpool prepared for their first league game since his exit.

An hour after Sanchez and Mkhitaryan sealed their moves, and City tied down their best player to new terms, Klopp named his starting lineup against Swansea City.

The German made just one change to the side that triumph over City eight days earlier, but most telling was his substitutes’ bench at the Liberty Stadium.

Absent again, despite returning to full training 12 days previous, was Sturridge, who is expected to leave Liverpool this month, with the club considering a loan offer from Inter Milan.

But as his side fell to a frustrating 1-0 defeat in south Wales, Klopp was left to turn to Adam Lallana and Danny Ings as his substitute options, with Dominic Solanke remaining on the bench.

That lack of quality in reserve undermined the Reds, and highlights the careful decision to be made over Sturridge’s future.

In 14 appearances for Liverpool this season so far, Sturridge has scored three goals and assisted a further three.

Of those, two goals and three assists have come in nine games as a substitute, with the England striker averaging a direct goal contribution every 29.8 minutes coming off the bench.

His strikes came against Arsenal in August and Maribor in November, while he laid on goals against Leicester City in September, Maribor in October and Spartak Moscow in December.

Though he failed to change the game when brought on against Sevilla and Spartak in September or Man United and Tottenham in October, Sturridge has directly contributed to a goal in 56 percent of his substitute appearances so far.

Only two other players have scored as a substitute, those being Mohamed Salah, who notched twice at Stoke City in November, and Alex Oxlade-Chamberlain who struck against Maribor in October.

James Milner is the only other player to assist from the bench, with four, laying on three in the 7-0 mauling of Spartak and crucially one in the 2-1 win at Hoffenheim in August. Along with Milner, Sturridge is the only Liverpool player to have a direct, game-changing impact as a substitute.

His assist for Jordan Henderson on the counter-attack in the 3-2 home victory over Leicester ultimately served as the Reds’ winner, providing a rarity this season.

Klopp’s attacking options at the Liberty on Monday, Lallana, Ings and Solanke, have mustered no goals and two assists between them so far this season.

While both Lallana and Ings are still working towards sharpness after prolonged spells on the sidelines, and Solanke is a developing talent at 20, the dearth of game-changing options at Klopp’s disposal is clear.

It is no coincidence that Milner (32) and Sturridge (28) are two of the oldest and, therefore, most experienced players in the Liverpool squad.

That battle-hardened quality would have boosted the Reds considerably in the dying stages against Swansea on Monday night—particularly Sturridge, given Klopp was in desperate need of a cutting edge.

Klopp is faced with a quandary this month, with his decision over Sturridge’s future a difficult one due to the striker’s circumstances.

He has started just five games so far this season, despite largely avoiding injury, with Roberto Firmino preferred up front, while even his nine substitute outings are fewer than Solanke (14), Milner and Oxlade-Chamberlain (both 15).

With the World Cup fast approaching, Sturridge is eager to secure regular first-team football to book his place in Gareth Southgate’s England squad.

Inter would likely provide that, though he would still be vying with Mauro Icardi for a place.

But Liverpool are still fighting on three fronts, in the league, the FA Cup and the Champions League, and leaving just Ings and Solanke as backup to Firmino would be negligent. “The perfect situation is for both sides, but if not the club comes first,” he added.

Sanctioning a loan move for Sturridge, regardless of the offer of a “significant” loan fee from Inter, would hardly be in Liverpool’s competitive interest.

Even if it is just coming off the bench and providing another five or six goals between now and May, Klopp would be much better off utilising Sturridge for the rest of the season.