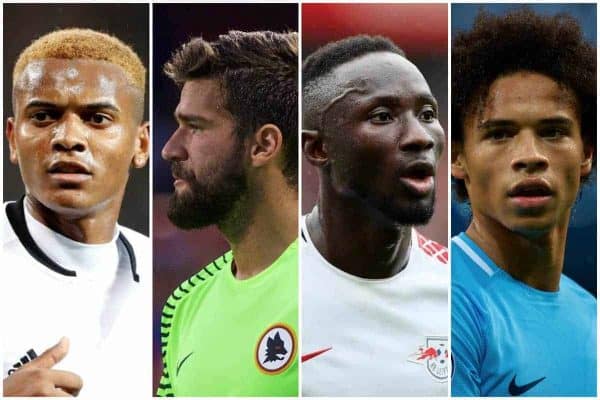 We round up the latest Liverpool transfer news and rumours on Saturday, as Jurgen Klopp looks set to miss out on a widely reported defensive target.

The Reds are set to take on Premier League leaders Man City at Anfield on Sunday afternoon, looking to inflict the champions elect’s first domestic defeat of the season.

This could mark the league debut of new signing Virgil van Dijk, and all eyes will be on the Dutchman as he builds on an impressive maiden showing against Everton last Friday.

However, Liverpool are rocked by the departure of Philippe Coutinho, with this the first clash since his £142 million move to Barcelona, with Klopp left eyeing a replacement.

The rebuild is set to continue throughout January, and here’s the latest from the rumour mill.

Alisson or Butland Move in the Summer?

Reports in the Liverpool Echo on Friday afternoon claimed Klopp is not looking for a new goalkeeper in the January transfer window.

However, James Pearce went on to add that “the manager will then reassess the situation in the summer,” opening up the prospect of another No. 1 arriving in the summer.

The two names most regularly touted with moves to Merseyside are AS Roma’s Brazil international Alisson and Stoke City‘s England hopeful Jack Butland.

And according to La Gazzetta dello Sport, Liverpool could make a move for Alisson at the end of the season, with the 25-year-old saying “maybe we’ll talk about it in June.”

But by the same token, Bleacher Report‘s Dean Jones claims “sources have indicated Klopp will make a move for [Butland] in the summer,” with either arguably an upgrade on Simon Mignolet and Loris Karius.

Following the signing of Van Dijk, Klopp seems to be content with his centre-back options.

However, this does contradict previous suggestions of concrete interest in FC Basel youngster Manuel Akanji, who would have arrived to complement the Dutch international.

The prospect of Akanji joining to partner Van Dijk may be out of Klopp’s hands, though, with Swiss publication Blick claiming a deal with Borussia Dortmund is imminent.

They report that a fee of around £19 million has been agreed, with Akanji having left Basel’s mid-season training camp to finalise his switch.

This serves as a blow to the Reds, but the hope will be that Van Dijk can form a long-term partnership with either Joel Matip or Joe Gomez.

Is Keita Closing in on Early Reds Move?

In the wake of Coutinho’s exit, Liverpool are seeking to tie up the signing of Naby Keita six months earlier than previously agreed.

Talks with RB Leipzig are ongoing, and claims emerged on Friday night that the 22-year-old could seal his move as early as Sunday, with his last appearance slated for Saturday evening against Schalke.

This has since been contested by the Liverpool Echo‘s James Pearce, but reports from Keita’s native suggest the switch could be on.

Journalist Tariq Panja, reporting from Guinea’s African Nations Championship base in Sidi Belyout, said “suggestions here [are] that the next 24/48 hours [are very] important.”

Could Keita wave farewell to the Leipzig faithful at the Red Bull Arena this weekend?

Moving forward the arrival of Keita as Coutinho’s replacement could go considerable lengths the placate the angst within the Reds’ support this month.

Coutinho’s sale, regardless of the British record fee received, has led to renewed criticism of the club’s ownership, Fenway Sports Group.

But discussing the decision to part ways with his No. 10 following Friday’s press conference to preview Liverpool’s clash with City, Klopp stressed it was his choice.

The France international was already subject of a failed big-money bid from the Reds last summer, and has been widely touted as a target this January.

However, Bleacher Report‘s Jones believes fears over his World Cup place could deter Lemar from making the move to Anfield before the summer’s tournament.

“Word from inside the Lemar camp suggests there are serious concerns about whether this is a good time for him to make such a switch because of the upcoming World Cup,” Jones wrote.

“He already has a battle on his hands to remain in the France side, and he knows competition will be fierce to get a regular slot in the Liverpool starting XI.”

Jones also adds that the Reds “are not actively pursuing him at this moment.”

City Duo Turned Down Liverpool in 2016

Ahead of Sunday’s blockbuster clash between the league leaders and Klopp’s top-four hopefuls, two City players have revealed they rejected moves to Liverpool a year-and-a-half ago.

The pair in question are midfielder Ilkay Gundogan and winger Leroy Sane, who are both staples of Pep Guardiola’s side.

“I spoke with Jurgen about different things,” Gundogan said on Friday, mirroring comments from Sane.

“He always liked me as a player and I would be a liar if I said he didn’t try.

“But when I had the opportunity to join City and work with Pep, it was quite clear that I wanted to come here.”

Finally, the Liverpool Echo have provided an insight into the efforts the Reds are making to ensure Ryan Kent doesn’t endure another miserable six months on loan at Bristol City.

The 21-year-old made just six appearances for SC Freiburg in the first half of the season before his spell in Germany was brought to a premature end.

And now having joined Championship hopefuls City, manager Lee Johnson “has vowed to give Kent regular action,” and if this isn’t the case “there will be financial penalties.”

Kent was named on the substitutes’ bench for City’s home clash with Norwich on Saturday afternoon.