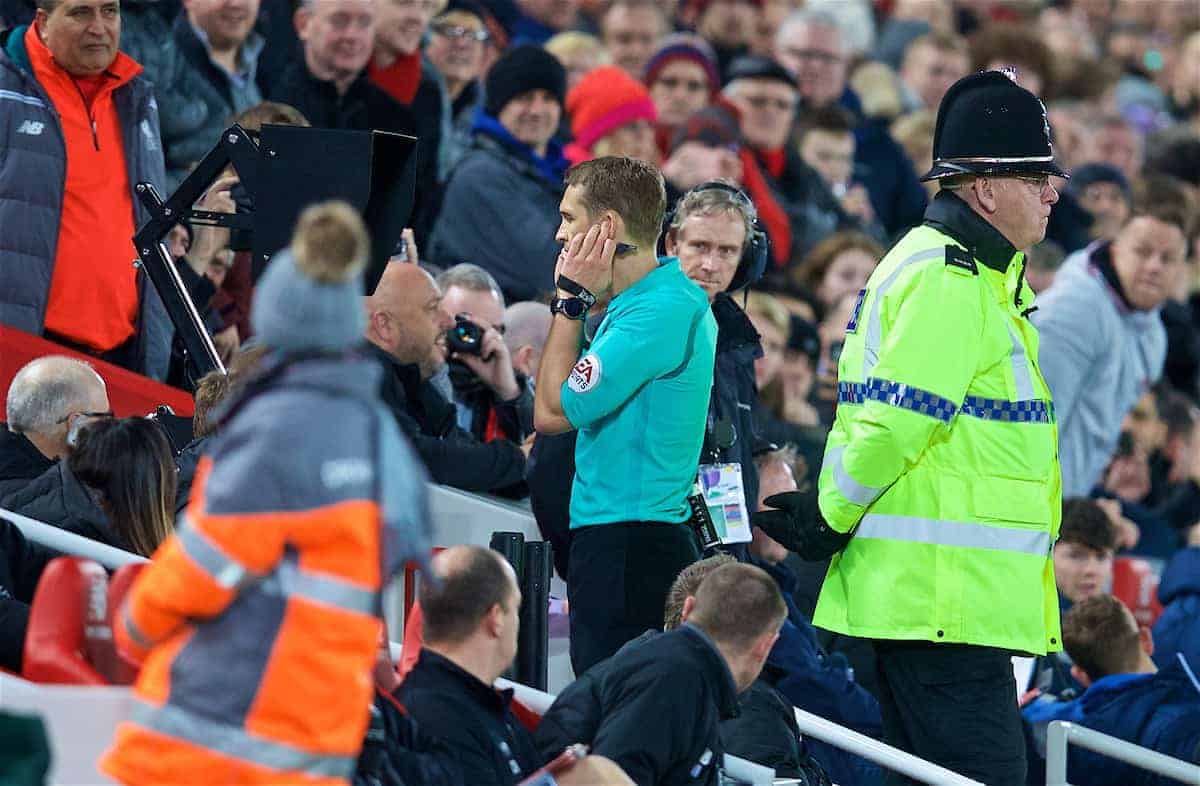 West Brom manager Alan Pardew was critical of the application of the Video Assistant Referee system during his side’s 3-2 FA Cup win over Liverpool at Anfield.

Three major incidents in the first half alone required the intervention of technology—including the first time a match referee has used a pitchside television replay.

And although it eventually led to the correct decisions being made, the time it took—with almost four minutes elapsing between Mohamed Salah being fouled and Craig Pawson awarding a penalty which Roberto Fimino missed—left supporters and players on all sides angry and frustrated.

Prior to that Craig Dawson had his header ruled out after VAR ruled Gareth Barry was in an offside position in front of goalkeeper Simon Mignolet.

“It’s hard to know where to start. I don’t think that is what you would want to see going forward,” said Pardew. “There is no communication from the referee to us.

“He reverses the Dawson goal, which would never had been disallowed in any league game, for offside. That was a bit of a surprise. It is really marginal.

“The bigger one, it was four minutes, five minutes for the Salah one so you are going from high tempo to nothing.

“We had a hamstring [injury] just after so we are going to have to get our players to do a warm-up or keep them ticking over.

“There was a lot of Scouse wit from the sidelines which I enjoyed.

“Our fans started singing ‘it should have been four’. Maybe they saw it on the phone. Do you want the fans to get it third hand?

“As a football person on the sideline I wasn’t comfortable with that first half.” All the talk about VAR papered over the cracks of a woeful Liverpool performance which saw them lose back-to-back matches for the first time in exactly 12 months and a 19-match unbeaten home run come to an end.

However, manager Jurgen Klopp refused to use the debate over VAR as an excuse for his third-successive failure to get past the fourth round of the cup.

“Of course it will change things. It is nice West Brom celebrates a goal and then someone tells them it isn’t a goal but I think that is what everyone wanted,” he said.

“If a goal should be disallowed, it is disallowed. It is normal in the beginning it takes longer. Is it cool in January when it is cold? Maybe not.”

Klopp was more concerned with the manner of defeat after Roberto Firmino’s early goal was cancelled out by the first of two Jay Rodriguez strikes just 71 seconds later.

Joel Matip’s own goal made it 3-1 just before half-time and even Mohamed Salah’s 25th goal of the season could not spark a late equaliser. “It was poor. Bad defending, that is how it is. Taking the wrong decision,” added Klopp.

“We scored a fantastic first goal. We go 1-0 up, it is perfect and it felt like it was a second later we conceded.

“The second goal we leave Rodriguez alone in the box which makes absolutely no sense and the third one is really unbelievable.

“It is easy to defend, you only have to push up and Dawson is offside.

“They defended and they deserved it. I don’t like to say that but it is the truth.”