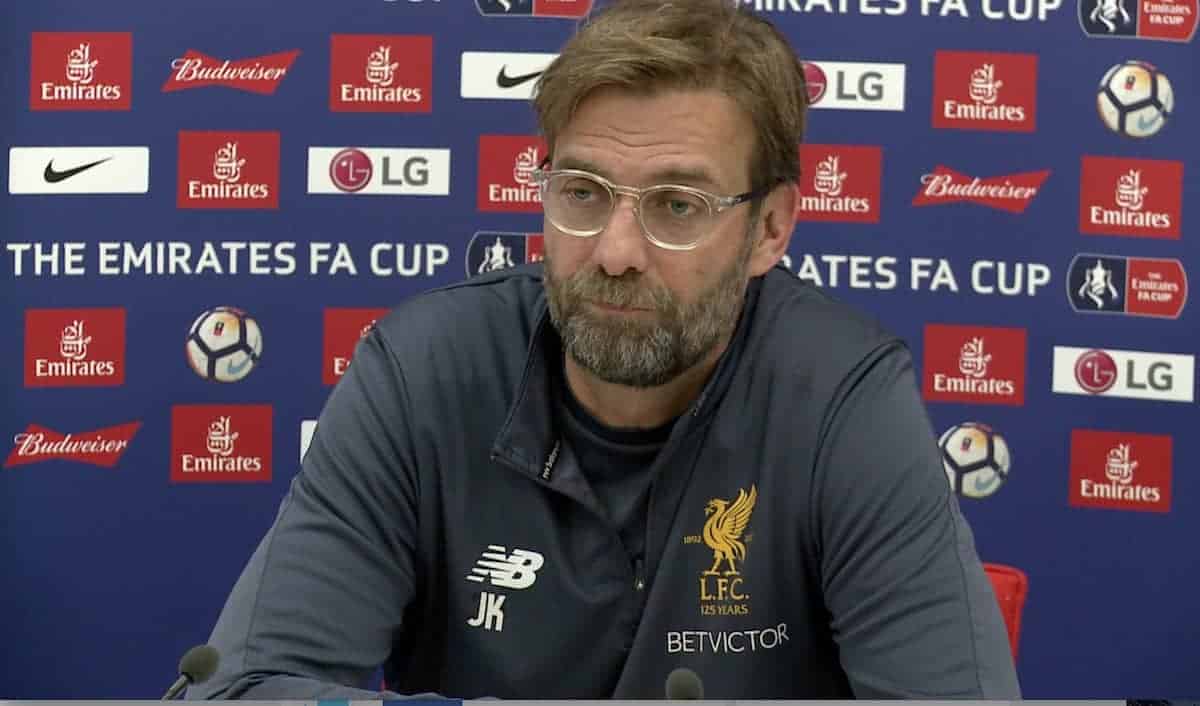 Watch as Jurgen Klopp previews Liverpool’s FA Cup third round derby clash with Everton, as the Reds look to see off a rival and stay in contention for silverware.

The Reds produced a stirring late showing at Burnley last time out to record a 2-1 win and get 2018 off to a winning start.

It means a run of 16 games unbeaten now for Klopp’s side across all competitions, with the FA Cup next up to add to recent good results in the Premier League and Champions League.

While rotations have been a feature of Klopp’s lineups of late anyway, he has suggested a strong Liverpool 11 will be on show as he pays “respect” to the FA Cup.

The manager confirmed Loris Karius would be in goal for the match, and Virgil van Dijk could be in line for a first appearance.

“Mo and Phil are not available. It’s not possible. With Virgil it’s different, he’s healthy—now I have to make a decision for this game,” he said to reporters.

“From our point of view there’s no rush in the situation; it’s much more important how many good games he can play for us than how many, or when it starts.”

Klopp also told the media that he recognised that fans wanted trophies, and that the entire team saw the FA Cup as a potential avenue for success.

“You can dream every day the dream of winning silverware. You know you want to have it and we all know how desperate our supporters are to get something.

“They can believe me we have an exactly similar mood. But we have to prove it on the pitch—I cannot win the FA Cup in the press conference!

The Reds only faced Everton less than a month ago, also at Anfield, as the two sides drew 1-1 in the Premier League despite Liverpool dominating the entirety of the match.

Klopp will be hoping that this time around, a similar performance is met by a more fair reflection in the scoreline.