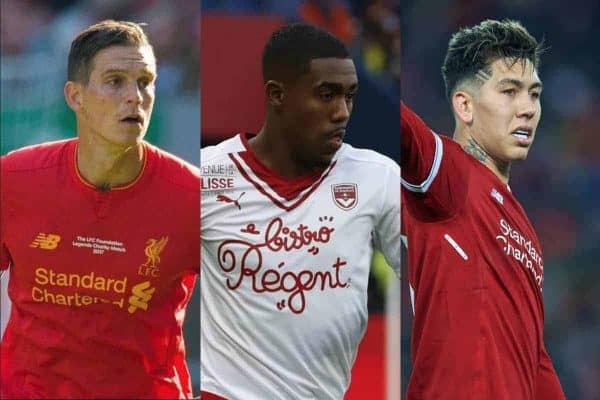 We round up the latest Liverpool FC news, including a major update on the future of a rumoured target and praise for our new star defender.

Though it remains early days, Virgil van Dijk is establishing himself as one of Liverpool’s best defenders of the Premier League era.

The Dutchman may, in fact, be the most accomplished centre-back to play for the Reds since Daniel Agger, who joined Jurgen Klopp‘s squad at their training camp in Marbella this week.

“I watched him play before and he is a really strong player,” he told LiverpoolFC.com of his successor.

“Taking the step from Southampton to Liverpool is not always easy, but it’s impressive how he’s started.

“He looks like he’s going in and looks like he is in charge. As a defender, as a team, it’s important to have a man like that.

“It’s still early, but I hope he can bring the best out of those around him at the back.”

Liverpool were loosely linked with a bid for Bordeaux’s Brazilian forward Malcom in the January transfer window, with the 20-year-old seeing moves to Arsenal and Tottenham fall through.

He is likely to be one of the most highly sought-after talents in the summer, and he could be a useful addition to Klopp’s squad after the withdrawal of the Reds’ interest in Thomas Lemar.

Speaking to Brazilian outlet UOL, Malcom gave a major boost to his suitors, revealing he will leave his current club in the summer.

“Yes, there was a promise that I will be negotiating in June. I will choose the team, and Bordeaux will let me go,” he said.

“I already said that I would have liked to leave this winter to meet new challenges.”

There is clearly no deal lined up at this stage, and it could be one worth considering for Klopp.

Brazil often announce their squads for international fixtures considerably earlier than other nations, and it is seemingly no different ahead of the summer’s World Cup.

While it should be no surprise to Liverpool supporters, but Tite has confirmed that Roberto Firmino is among 15 players who have already booked their places in Russia.

“[My] list is open in one part and closed in another,” he told UOL.

“[It is] closed on names with a consistent situation at their clubs and that, within the selection, [are] already confirmed, affirmed and playing well.”

Incidentally, Liverpool have reportedly pulled out of the race to sign Brazil’s No. 1, Alisson, with Loris Karius staking a claim as Klopp’s long-term first choice.

There has been a considerable overhaul among Neil Critchley‘s U23s ranks following the January transfer window, with a host of academy staples leaving on loan or on permanent deals.

This has seen a number of players make the step up from the U18s, including Adam Lewis, Curtis Jones and Liam Millar, while Herbie Kane has inherited the captaincy from Corey Whelan.

Speaking to LiverpoolFC.com on Kane’s performances since taking the role, Critchley highlighted its importance in his development.

“Herbie has really come to the fore in the last few weeks. He has seen a few U23 senior players go on loan and he’s taken it upon himself to become the leader in this group,” he said.

“His training and his performances have been top-class so he deserves the armband.

“It also comes with a big responsibility and he knows that. I’m confident he can accept that challenge and I think it will develop him as a person as well as a player and I think that’s really important for Herbie.”

Kane, who is still only 19, signed a four-year contract with Liverpool this time last year.

Ejaria Injured Ahead of Busy Weekend For Loanees

One player whose departure has had a direct influence on Kane’s game time, Ovie Ejaria, has enjoyed a bright start to life on loan at Sunderland.

But the midfielder won’t be available for Saturday’s home clash with Brentford, however, with Chris Coleman revealing he “pulled up in training on Wednesday” so is “very doubtful.”

Daniel Sturridge also won’t be involved for West Brom in their FA Cup fifth-round meeting with Southampton due to a hamstring injury, and Lazar Markovic is still working towards fitness ahead of his Anderlecht debut.

However, it is likely to be a busy weekend for Liverpool’s loanees elsewhere, with Harry Wilson and Ryan Kent both looking to maintain their form for Hull City and Bristol City respectively.

The likes of Marko Grujic, Pedro Chirivella, Divock Origi and new signing Anderson Arroyo could also be in action over the coming days.