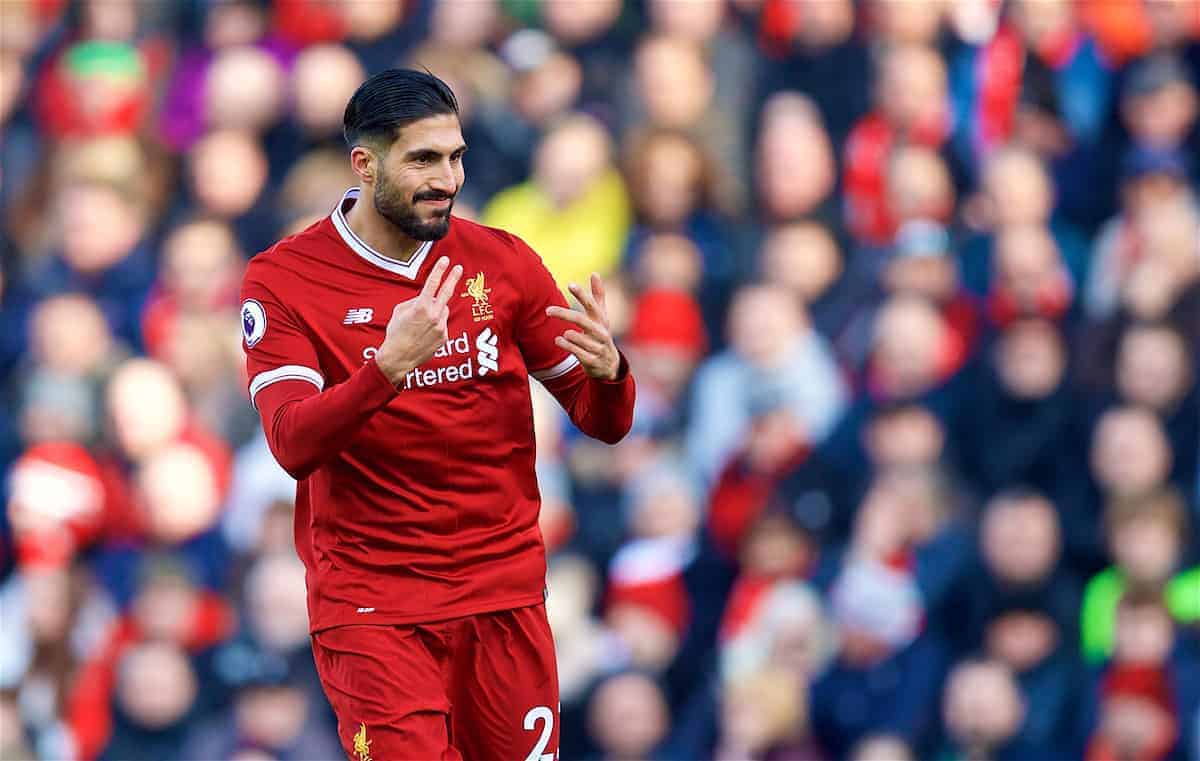 Liverpool’s in-form front three of Mohamed Salah, Roberto Firmino and Sadio Mane are defying belief, according to midfielder Emre Can.

The trio were all on target as the Reds went past 100 goals for the season in all competitions while routing West Ham 4-1 at Anfield on Saturday.

Salah has 31 goals, Firmino has 22 and Mane’s tally is 13, meaning the red-hot triumvirate have scored a staggering 66 times between them in a campaign that still has three months remaining.

“The front three can score in every game at any minute. It’s unbelievable how good they are. They did it again. We are always happy if they can score and we win.”

Given that attacking trio’s current form, the biggest surprise was that it was Can, rather than Salah, Firmino or Mane, who scored Liverpool’s first and their landmark 100th in their 40th fixture of the term.

German midfielder Can revealed he set Jurgen Klopp’s side on their way by replicating a header from a Salah corner that he had executed in training the previous day.

“I’m happy that I could score because we trained it and I scored like that,” he added.

“It’s always good when you train something and score like that. I’m happy, of course, when I can score and help the team.”

It was Liverpool’s first fixture since they thumped Porto 5-0 away in the opening leg of their Champions League last-16 tie 10 days earlier.

Given they were already out of the FA Cup, Klopp used the mini break that followed to take his team to Marbella on a warm-weather training camp.

The Reds manager felt the value of such a trip, and the extra time on the training ground, was evident in their performance at Anfield.

“As a football manager you like it if you can work with your team,” he explained.

“If you can prepare a team for each game, it would make football much more attractive if you gave the teams more time to prepare things.

“Sometimes it’s only intense and both teams need to deal with intensity and fight, so we really could prepare and I’m happy that I saw a lot of things we did on the training ground in the last 10 days.

“I am happy we didn’t have to play immediately after Porto because for a human being it’s difficult to have a situation like that, winning 5-0 completely not expected and then you need to be ready again so I was happy about that.” West Ham conceded four against Liverpool in the reverse fixture too but could at least take solace from the fact that the likes of Manchester City, Arsenal and Porto have also shipped four or more to them this season.

“The second half was tough for us,” midfielder Mark Noble told WHUFC.com.

“We conceded the second goal [early in the second half], made a couple of individual mistakes, really, and they punish teams. They did it to Manchester City here and scored four goals and pounced on mistakes.

“We hit the bar and had another shot that their keeper saved. If only we could have been a little more clinical when we went forward – we got in some really good positions.

“There is no point making up excuses. They were better than us. They’ve got a fantastic front three with so much pace, power and skill. They deserved to win.”