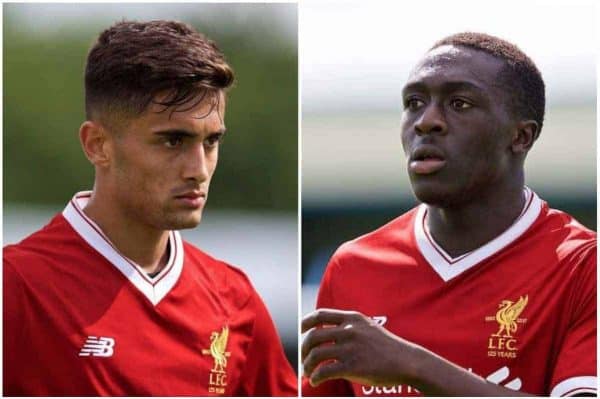 The Liverpool U23s face a reshuffle of the ranks after the January window, and young duo Yan Dhanda and Bobby Adekanye can take advantage.

Beyond Philippe Coutinho‘s move to Barcelona, and Marko Grujic, Ryan Kent, Lazar Markovic and Daniel Sturridge leaving on loan, the Reds’ winter was a largely quiet one in terms of exits.

Jurgen Klopp sought to keep the core of his first-team squad intact, though it can be argued that it is left considerably weakened.

Away from Melwood, however, there was a considerable shakeup in Liverpool’s academy ranks, with five players loaned out and another two departing on permanent deals.

And Cameron Brannagan ended a 16-year association with the club to join Oxford United, while Lloyd Jones departed after six-and-a-half years to link up with Luton Town.

These were essential deals for the Reds midway through the campaign, with each of those seven players aged 20 or over and in need of regular first-team football in order to develop.

But they have left Neil Critchley‘s group significantly thinner, and without some of his key players.

In the first half of the season Virtue and Whelan made the joint-most appearances for the U23s (19), with the latter wearing the captain’s armband.

Jones and Ejaria (17) were not far behind, while Wilson was top scorer and assist-maker, netting 12 goals and laying on 10 in 16 games as Critchley’s best and most important player.

They have also lost Rhian Brewster, with the 17-year-old facing at least three months out with an ankle injury, while losing Coutinho increases Ben Woodburn‘s importance to the first team.

But the U23s still have a long stretch to go before the end of the season, and will need to find solutions from within in order to keep moving forward.

The knock-on effect will see a host of youngsters—including the likes of Adam Lewis, Curtis Jones and Liam Millar—likely move up from Steven Gerrard’s U18s, who will in turn promote from the U16s.

This will give some of Gerrard’s most impressive youngsters the chance to shine on a bigger stage, but perhaps most interestingly it will also give opportunities to some previously peripheral figures.

Most notably, this comes in the form of teenage forwards Dhanda and Adekanye, who are poised to make the most of the next five months.

With Wilson, Brewster and Danny Ings vying for roles in Critchley’s attack before the turn of the year, Dhanda only featured sparingly for the U23s.

The 19-year-old racked up 16 appearances, level with Wilson and behind only Whelan, Virtue, Jones and Ejaria, but of those only nine of those were starts.

This saw him struggle to make an impact, scoring only three times, one of which came in the 7-0 victory over Bristol City in the Premier League Cup, while he failed to register a single assist.

Meanwhile Adekanye featured even less prominently while splitting his time between U23s duty and outings for Gerrard’s U19s in the UEFA Youth Cup.

Having made the step up from the U18s over the summer, the Dutch winger was eased into the fold, making his first-ever Premier League 2 start in December’s 3-1 defeat to Swansea City.

Adekanye ended the first half of the season with a single assist for the U23s, having started four times with a further seven appearances from the substitutes’ bench.

Both Dhanda and Adekanye will have been frustrated with their prospects heading into 2018, but now they can look ahead with optimism.

Critchley’s squad is threadbare, with three players aged 20 or over (Shamal George, Nathaniel Phillips and Paulo Alves) remaining and none of those set for a marquee half-season.

Instead the U23s coach will be turning to youth, and of his teenage talents Dhanda and Adekanye are two of the most immediately promising.

So far, Adekanye has started in all three of the young Reds’ games in 2018, while Dhanda has started in two, with the pair particularly impressive in the 4-1 win over Charlton in the Premier League Cup.

That day they lined up as wing-backs in Critchley’s 3-4-3 formation, and given this replicates the system Gerrard has used for the majority of his U18s tenure it could be the new blueprint.

With Liverpool stretching the play at Chester’s Deva Stadium, it was Dhanda who laid on the first of Adekanye’s two goals as the pair thrived.

It was a statement display from Adekanye in particular, who was relentless driving down the left flank and diligent in his efforts tracking back, the latter markedly improved of late.

Klopp will already be aware of Dhanda and Adekanye, as they have both already trained under the German at Melwood, and now the spotlight is on them they can hope to do so more regularly.

This is compounded by a looming, ticking clock, with the youngsters’ contracts both set to expire at the end of the season.

The dwindling months are less of a threat to Klopp’s plans than with Emre Can in the first team, but the onus is on Dhanda and Adekanye to perform and earn a long-term future at Anfield.

It remains to be seen whether either would fit in on the senior stage, given their respective qualities.

Dhanda is a silky, versatile attacking midfielder whose lack of physicality belies his tenacity, while Adekanye is a much more conventional winger than those currently utilised by Klopp.

But the brass ring is there to be grabbed, and as a new generation are nurtured at Kirkby the U23s’ new leading forwards can hope to make their mark.