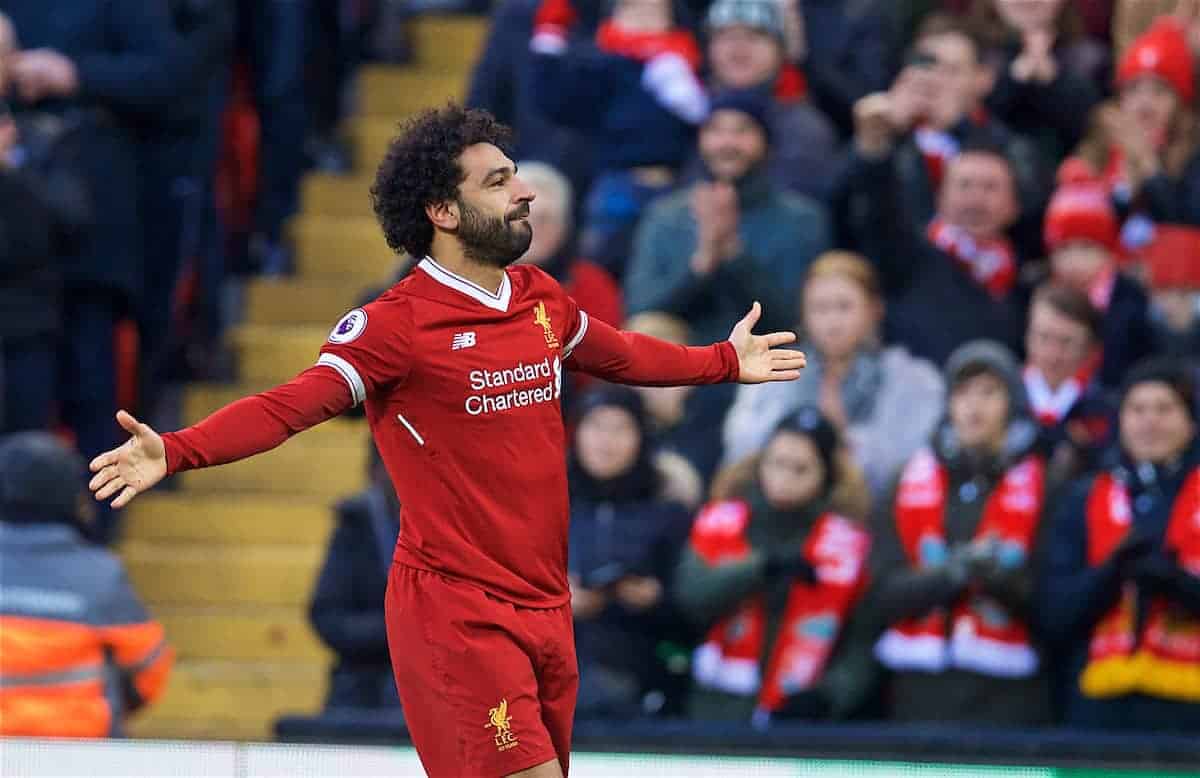 Liverpool moved up to second in the Premier League table with a 4-1 victory over David Moyes’ West Ham at Anfield on Saturday afternoon.

Mohammed Salah and Marko Arnautovic both hit the woodwork in an intense opening half before Emre Can headed in Liverpool’s 100th goal of the season from a corner.

It didn’t take long in the second half for Salah to make his mark as he doubled the Reds’ lead in the 51st minute following a great run from Alex Oxlade-Chamberlain.

Roberto Firmino made it 3-0 but West Ham were handed a lifeline when Michail Antonio went through on goal to score for West Ham just seconds afterwards.

Sadio Mane hit the post but scored moments later following an inch-perfect cross from Andy Robertson as Liverpool went on to win 4-1.

Fans were pleased with Robertson and Alexander-Arnold’s impact…

Robertson and Alexander-Arnold providing a real threat down the flanks for Liverpool thus far. Bags of energy coupled with incisive deliveries.

Andy Robertson is such a great signing. Klopp's bought a hell of a player there.

Robertson being deadly with those balls into the box. Absolutely love him!

Another no-look finish from Bobby. ?

Roberto Firmino is looking better by the game. Yet another no-look finish today. No wonder he's a fan favourite. What a character. #LFC

And at full-time supporters were delighted with another comfortable win…

Imagine not wanting to be part of their gang. pic.twitter.com/MjQSLcHIVp

Not even Lallana’s terrible new haircut can take the shine off that performance. Outstanding.

Andy Robertson is an unbelievable signing.

“Give Mane, Salah & Firmino lifetime contracts. Pay them all whatever they want. I don’t care how just do it!”

Very good performance. We were at it from the off. Got the goals. Should've been more – way more. Robertson was excellent today. Second in the league. All the front 3 on the score sheet. Now I can just relax as the chasing pack feel the pressure.

Important win for us today with the Mancs & rent boys playing tomorrow. Pass the pressure over? #LFC #YNWA

“Confirmed, We have the best front 3 in europe.”

“Great performance. Second in the table. Can enjoy the manure game tommorow. Hopefully conte can teach them a lesson.”

– Kusanagi on the forums.

This was such an important win ahgainst a team that came to purely defend as well as when Chelasea are playing United. #LFC

“Liverpool in their typical demolition mode. Could of been more as always .Robertson is been a steal at 8M while city paid 52 for Mendy.”

No complaints or criticisms from me today. Great result. Lot of possession, chances & no injuries. Keep this momentum going. #LFC

It's beginning to look a bit rosey!! #LFC These great performances and wins just keep coming ???? long may they continue #mightyreds

– Pandle on the forums.

Race for the top four. A good win for Liverpool today, but this weekend's big match is tomorrow. pic.twitter.com/GR28rRCaGO