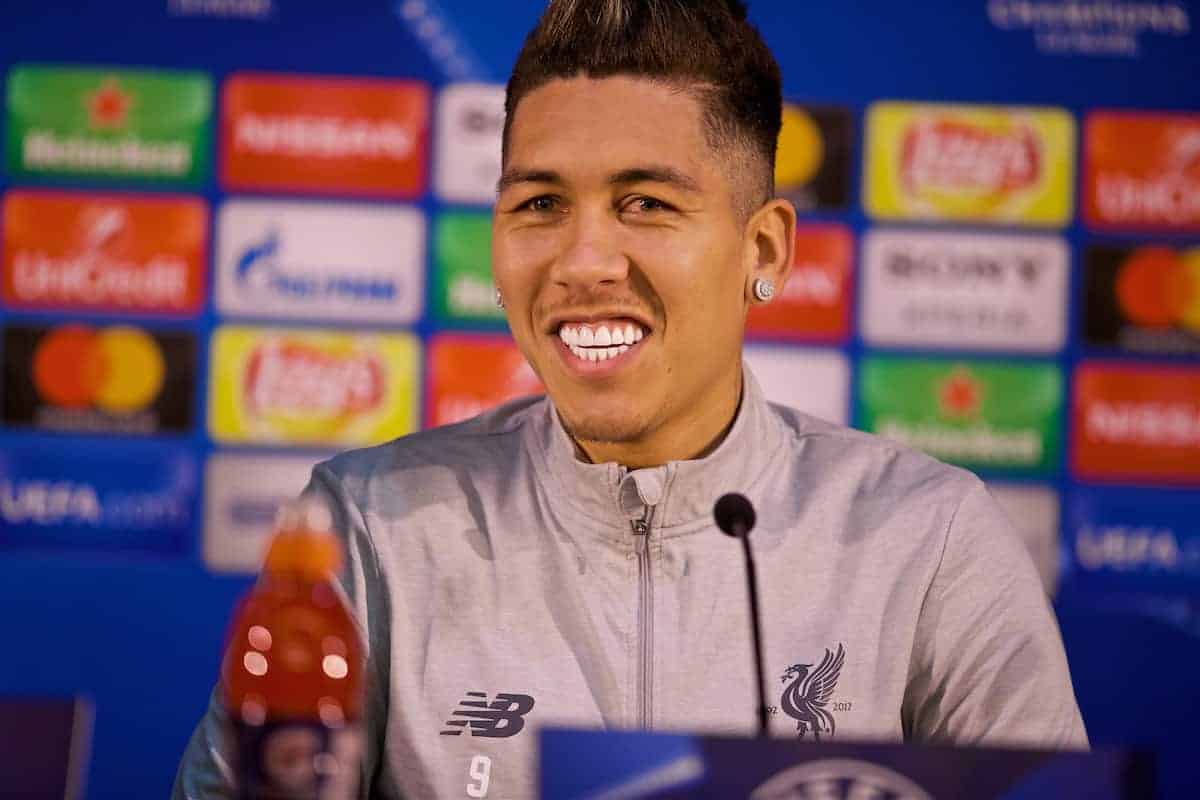 Roberto Firmino does not know if Champions League opponents Porto are afraid of Liverpool but he hopes to make them suffer in the Estadio do Dragao.

Jurgen Klopp’s side qualified unbeaten top of their group after scoring 23 goals, a record for an English club and a competition total surpassed only by Paris St Germain (25), also this season.

Nineteen of those goals came from Firmino (six), Mo Salah (five), Coutinho (five) and Sadio Mane (three) and although one of that quartet is now with Barcelona it does not make them much less of a threat.

“I don’t know if Porto are going to be afraid but we are going to make their life difficult and make them suffer,” said Firmino, who has 20 goals for the season in all competitions.

The Brazil international’s tally for the Champions League this season is only bettered by Real Madrid’s Cristiano Ronaldo, who has nine, and is on a par with PSG pair Neymar and Edinson Cavani, Tottenham’s Harry Kane and Sevilla’s Wissam Ben Yedder.

Asked whether he felt he belonged in such rarefied company Firmino added: “Of course I want to be at their level but I only focus on playing a good game.

“If I play a good game then the goals will appear. I am trying to give my maximum for the team and trying to be alongside these great players in Europe.”

Firmino has scored four times in his last six matches and his contribution has helped lessen the impact of compatriot Coutinho’s departure to the Nou Camp.

“Coutinho is a great player and of course when he left that put a greater responsibility on everyone else to perform without him,” he added.

“But it is our job to deal with greater responsibility and I think we have done that so far.” The draw against Porto was a kindly one for Liverpool but even after their goalscoring exploits in the group stage no-one is tipping them to challenge the established Champions League order of Barcelona, Real Madrid, Bayern Munich or Juventus.

It was put to Klopp than no-one fancied the Reds side which won in Istanbul in 2005 after scraping through the group stage with a last-gasp win over Olympiacos.

That provoked a blunt response from the German.

“I don’t think the 2005 side thought about winning the Champions League before the last 16,” he said.

“I’ll ask Rafa [Benitez] but that would surprise me because it makes no sense. If we are in the final then I’ll say we will try to win it but that is too far off.

“I don’t like talking about the round after the round you are playing, in fact I hate it.

“I only answer nicely now because I am friendly and we are in public but if someone asked me about the round after the round in private I would leave the room.”

Klopp has confirmed Loris Karius, who has taken over as first-choice goalkeeper, will start in Portugal but refused to expand on what that means for Simon Mignolet.

“No-one knows about the future. It is not for me to think about these things, I have to make a decision for tomorrow night,” he said.