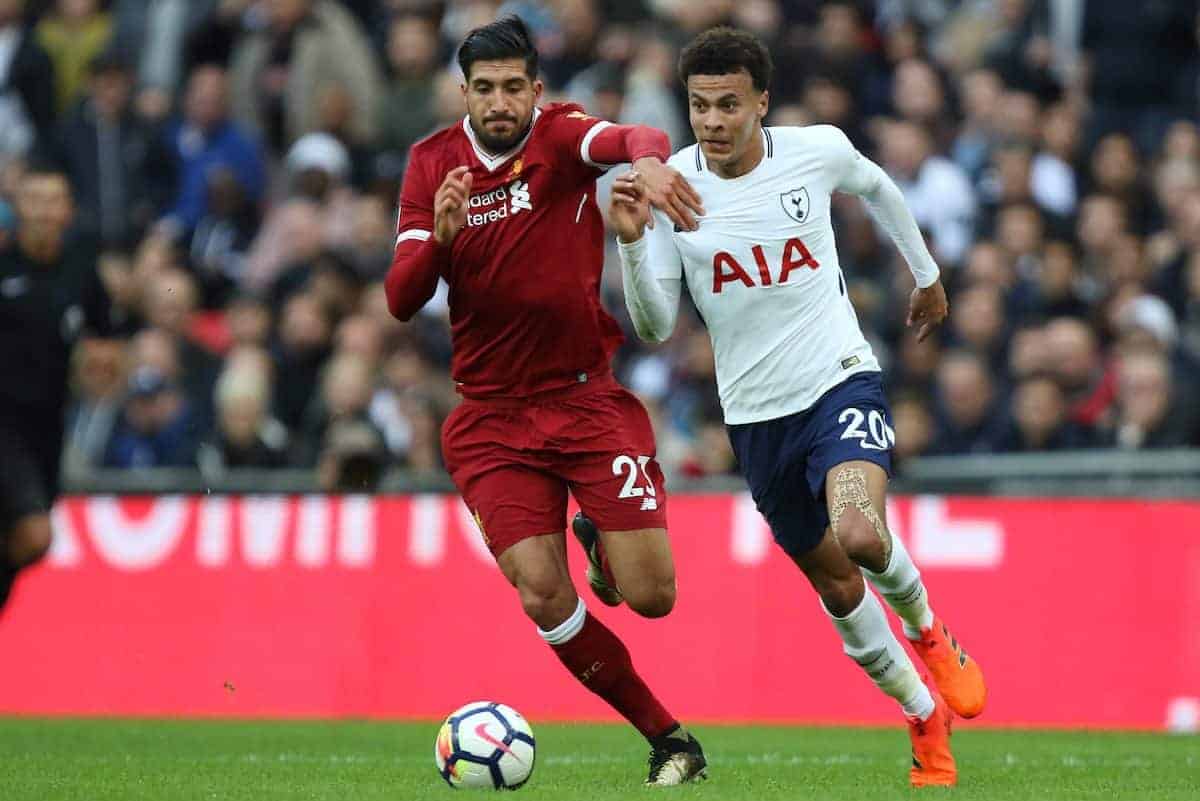 Jurgen Klopp has urged Liverpool to capitalise on their Anfield advantage when they take on a Tottenham side nearing full strength on Sunday.

The Reds will be hoping to continue their return to form after Tuesday night’s 3-0 win away to Huddersfield Town, but this time against considerably tougher opposition.

Mauricio Pochettino’s Spurs head to Merseyside on the back of an impressive 2-0 victory over Man United in midweek, with the north London side undefeated in their last nine games.

They are boosted by the return to fitness of right-back Serge Aurier (calf) and midfielder Harry Winks (ankle), with the pair reporting for training ahead of the weekend.

This leaves Pochettino with little in terms of injury concerns, with only Toby Alderweireld (hamstring) a doubt, though new signing Lucas Moura is unlikely to feature.

Liverpool have the added motivation of their 4-1 humiliation at Wembley in the two sides’ last meeting, and speaking at Melwood on Friday, Klopp highlighted the need for response at home.

“The Tottenham game at Wembley was not a good game from us,” he told reporters.

“They had a good start, good middle of the game, and good finish—that’s why they won the game

“But it’s absolutely nothing to do with the next game.

“[With] the situation in the table, our targets and what we want to do and where we want to finish the season, it is clear it is a very important game.

“These are ‘six-point’ games and the only advantage one team can have in a situation like this is to play at home, at Anfield in this case. That’s really good and I’m looking forward to it.”

Liverpool certainly have more fitness issues than their top-four rivals, with Ragnar Klavan and Adam Lallana doubts and Nathaniel Clyne ruled out with a long-term back injury.

But Klopp was buoyed by the return, and performance, of captain Jordan Henderson at the John Smith’s Stadium on Tuesday night.

And the German praised Henderson, amid outside criticism, though he insisted his display against Huddersfield had no effect on his view of the midfielder.

“I don’t get this. I don’t know why, or even if, people are not happy with Jordan,” he said.

“He’s a fantastic player, and he didn’t ‘prove’ that to me at Huddersfield. It was clear before.

“When he’s not available that’s always a blow for us, like it is with other players.

“[He is] a really fantastic player and an even more fantastic lad, so really important.”

Liverpool have not lost to Spurs in any of their last seven home meetings, winning five, with their last defeat at Anfield coming under Kenny Dalglish in 2011.