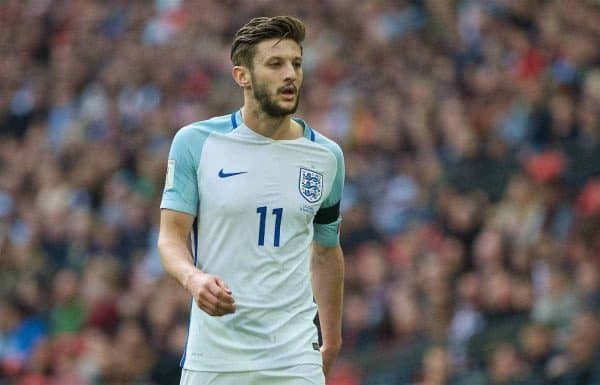 Liverpool will have four players in Gareth Southgate’s latest England squad as preparations step up for the 2018 World Cup finals.

England face Netherlands and Italy across the international break as they bid to evaluate players who hope to make the squad.

And the national team boss has included a quartet of Reds seniors in a 27-strong squad.

Liverpool captain Jordan Henderson is in and might also be in line to wear the armband for the national team, with striker Harry Kane out injured.

He’s joined by fellow midfielders Alex Oxlade-Chamberlain and Adam Lallana, who might be something of a surprise given his limited game time after injury.

There’s also an inclusion for defender Joe Gomez, who impressed against Brazil earlier on in the season.

Elsewhere, Liverpool will also have several starlets in action across the youth categories.

Adam Lewis is named in the U19 squad, having previously featured at U16 and U17 level.

The U19 squad is mostly made up of players who memorably won the U19 European Championships last summer.

They face Hungary, Latvia and Macedonia across this break as they bid to reach the Euro Finals in Finland at the end of the season.

And with the U21s, Liverpool have three representatives with England.

Trent Alexander-Arnold continues his excellent season with inclusion, while Dominic Solanke is also in the squad after featuring for the senior national side earlier this season.

There’s also a promotion for Ovie Ejaria, currently on loan at Sunderland, with the midfielder previously part of the U20 squad which won the World Cup for that age group last summer.

The U21s face Romania in a friendly fixture, the Cyrille Regis memorial match, as well as a European Championships qualifier against Ukraine.