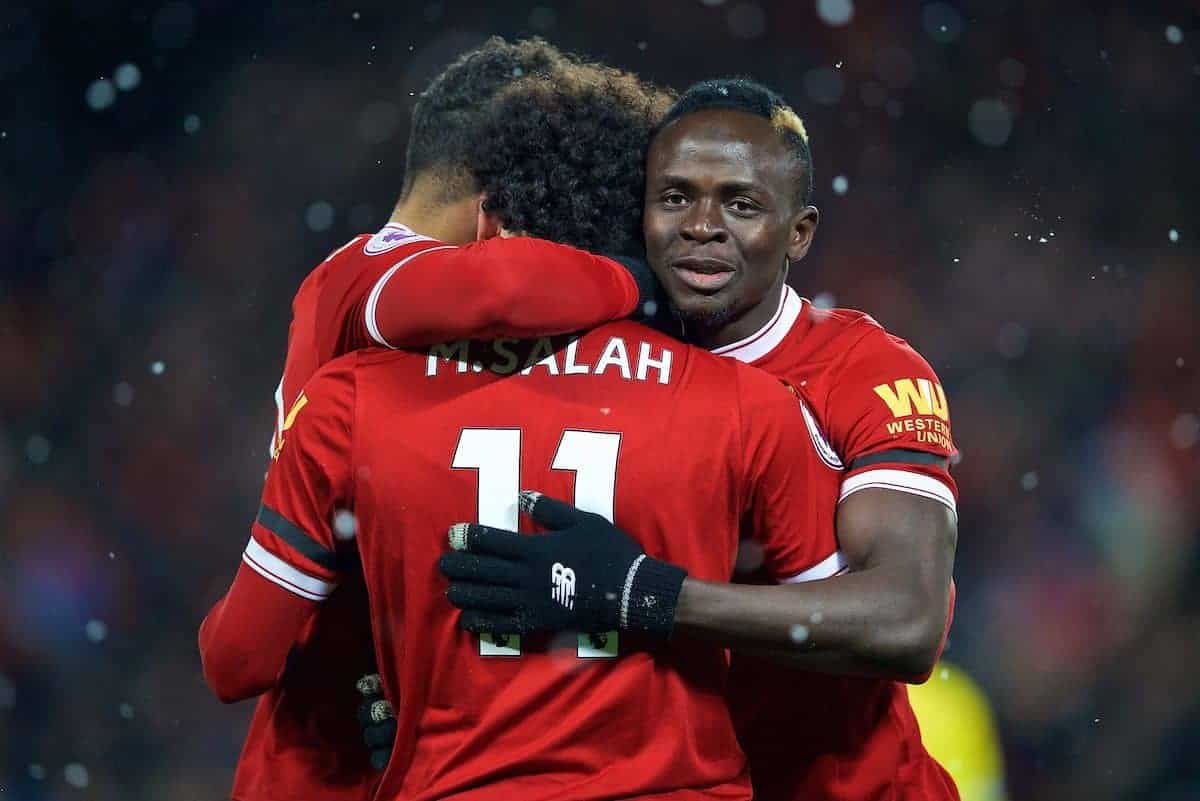 The Liverpool squad were in high spirits after Mohamed Salah‘s four-goal display spearheaded a 5-0 victory at home to Watford on Saturday evening.

Salah had a hand in every goal at Anfield, laying on Roberto Firmino‘s stunning back-heeled finish and becoming only the fourth Reds player to net four in a Premier League game.

Following Robbie Fowler, Michael Owen and Luis Suarez, the Egyptian is quickly cementing himself as one of the club’s best signings since the inception of the English top flight.

And he is becoming a very popular presence in Jurgen Klopp‘s squad, with Emre Can leading the plaudits on Instagram after the game:

Can, who was forced off the field after just 27 minutes with a back injury which Klopp expects is not “too serious,” insisted it had been “all about this man tonight.”

Jordan Henderson echoed Can’s approach, after watching Salah’s five-star showing from the base of the midfield:

Great team performance and Congrats to the King ? @mosalah22 ???

And Sadio Mane praised his fellow forward, with the Senegalese producing a quietly impressive showing on the opposite flank despite failing to get on the scoresheet:

Though he didn’t add to his tally of 14 goals for the campaign, Mane created the same number of chances as Salah (three each), more than any other player.

Meanwhile, though they continued to shine the spotlight on their “on fire” team-mate, Joe Gomez, Danny Ings and Georginio Wijnaldum all pointed to an excellent all-round team performance:

Great team performance today congratulations to @roberto_firmino & king @mosalah22 ? good to keep a clean sheet aswell thanks for your support!

Great performance from the boys today! @mosalah22 on? #YNWA ?

I’m starting the international break with a great feeling. The team was solid and @mosalah22 was on fire!? Thanks for the support guys #YNWA #weareliverpool ?

Wijnaldum is among a host of players now due to depart for international duty, and the Dutchman explained how he was “starting the international break with a great feeling.”

Liverpool’s next game comes on March 31, away to Crystal Palace, with Saturday’s victory moving them back up to third in the Premier League table.

With Man United, Tottenham and Chelsea all in FA Cup action over the weekend, this comes with the Reds having played one extra game, but victory over Watford puts pressure on their rivals.

On an individual level, Salah’s four goals moved him up to 28 in the league, four ahead of Spurs’ Harry Kane, who is facing a lengthy spell on the sidelines through injury.