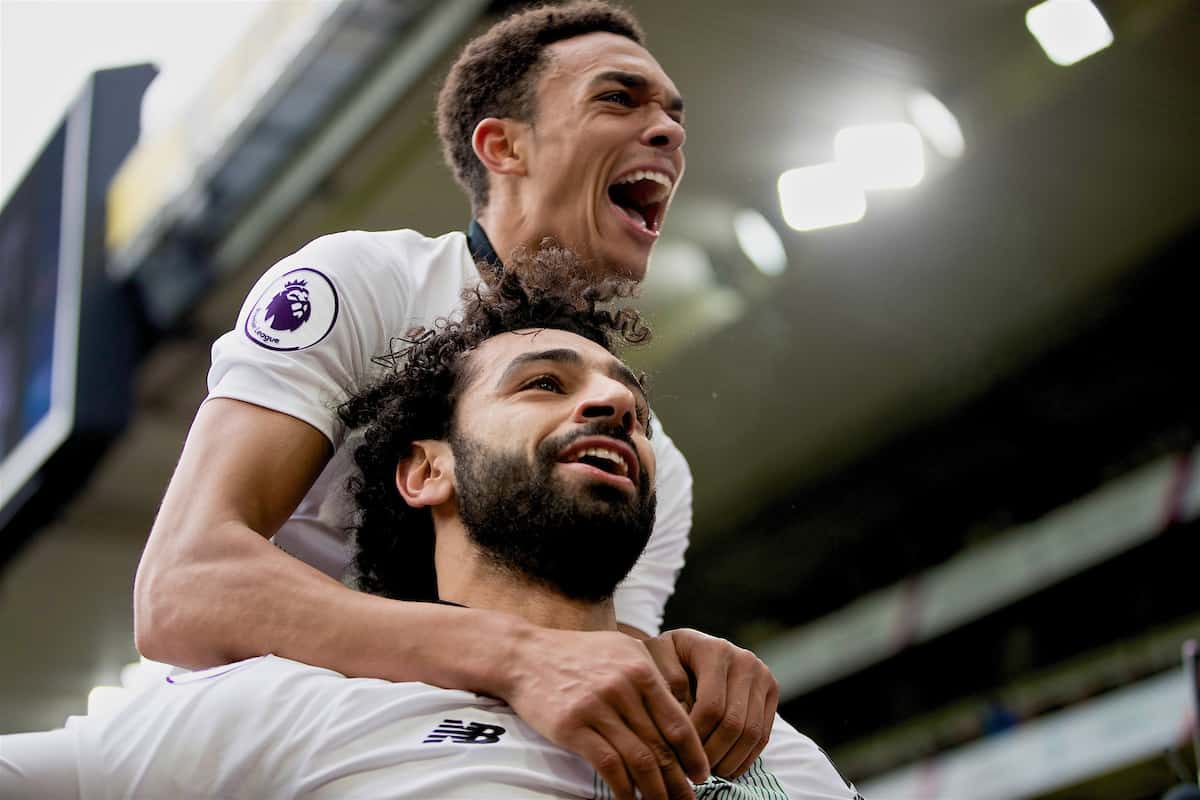 Liverpool weren’t at their best against Crystal Palace on Saturday, but a ground-out 2-1 win feels huge in the top-four battle.

The German has been in good form of late, and he again did well on the whole.

The major error though was his role in the penalty when he clattered into Wilfried Zaha to concede the penalty that Luka Milivojevic converted. But made an excellent stop to deny the Ivorian and saved a second-half free-kick.

Looks a completely different goalkeeper to a year ago.

Not a good day at the office for Alexander-Arnold, but he did improve as the match went on.

The youngster was targeted throughout, much in the way he was at Man United, and Zaha had a field day running off him.

He is struggling defensively at the minute, but some of his crossing was very good. A foul throw was fairly inexcusable, and it wasn’t his first of the game!

This was another unconvincing performance from Matip, who looks a weak link at the moment and a worse option than Dejan Lovren. Suddenly it’s Liverpool’s right side of defence that’s the weakness and opponents are targeting it like they used to the left side.

Matip didn’t challenge Christian Benteke in the lead up to the penalty, and lost the Belgian in the second-half. His use of the ball was also sloppy and one wayward pass left Jurgen Klopp fuming.

Looked better in a back-three, but never filled you with confidence.

The Dutchman was largely faultless, barring one sloppy loss of the ball, in a game that saw Liverpool enjoy the majority of possession.

He was dominant aerially and always exuded class, and while others around him struggled, he didn’t drop much below his normal level.

This was yet another good display from Robertson, as he continues to show why he is one of the bargains of the season.

He was forever attempting to make things happen down the left flank, delivering inviting crosses which included the cut-back for Mohamed Salah‘s late winner – the composure for that assist was exquisite.

The skipper started off well, passing the ball with purpose, but he soon dipped, failing to impose himself alongside Gini Wijnaldum and James Milner.

Henderson didn’t look comfortable when pressed by the Palace players, and a lack of creativity was on show from deep.

Like almost everyone, he had a stronger second-half, but he has had much better games.

Mr Invisible was out in force away from home yet again!

The way in which the 27-year-old vanishes on his travels is now becoming a genuine issue, and he offered almost nothing in an attacking sense.

Admittedly he’s just returning from illness, but this was a poor showing and it needs sorting.

Liverpool’s entire midfield was disappointing, but Milner was the best of the bunch, at least bringing some attacking thrust to the side.

His inch-perfect cross allowed Sadio Mane to equalise shortly after half-time, and he rarely did anything wrong on the ball.

His experience was key in seeing the game out. By Salah’s unbelievable standards, this was a quiet 90 minutes, but yet again he proved to be the Reds’ match-winner.

Palace defended well against him, offering him little space, but he did look dangerous whenever he had the ball at his feet.

Took his goal superbly with his right foot, producing a finish perfectly highlighting his current levels of confidence.

Moving him to a central area after the change to 3-5-2 ultimately won the game.

Mane is a unique player at the best of times, and this was a day that saw him produce good, bad and bizarre.

The Senegalese had a header correctly ruled out for offside, but he did equalise with a decent close-range finish, and always looked to make things happen.

He was booked unfairly for diving in the penalty area, but was fortunate to stay on the ball after a deliberate handball. Not the most intelligent play.

Firmino wasn’t at his best, but his work-rate was superb, with a number of important tackles made late on.

He couldn’t influence things as much as he would have hoped, but he also did nothing wrong, and rarely played the wrong pass.

Even when he is quiet he’s effective. Only on the pitch for three minutes before injury struck yet again. Season over.

Offered much more in midfield than Wijnaldum.

Did a solid job and won a few aerial battles. Jurgen Klopp didn’t get a good performance out of his players, but it is testament to the manager that Liverpool are now ‘winning ugly’.

He has instilled a winning mentality, with the Reds prevailing in tricky away matches far more than they used to.

You couldn’t fault his starting lineup, even though so many weren’t at their best, and bringing Oxlade-Chamberlain on was a shrewd move.