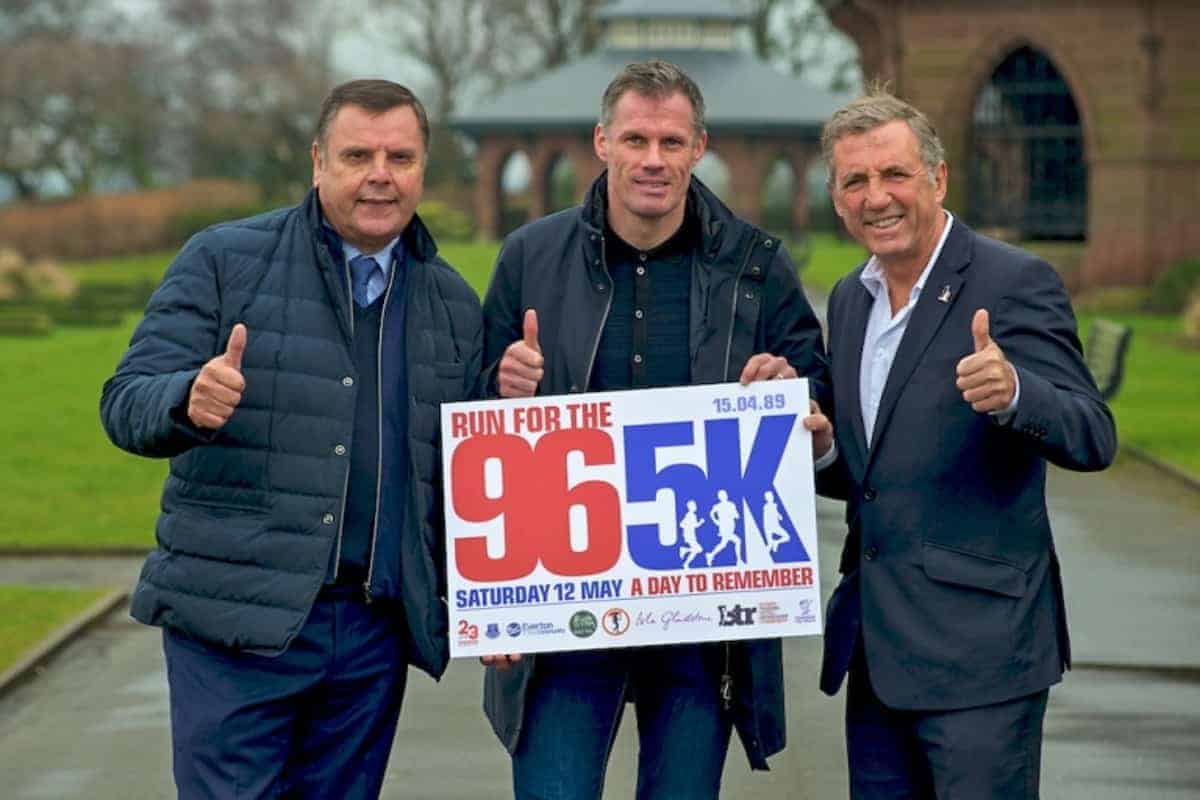 The fourth annual Run For The 96 5K was officially launched on Thursday at Liverpool’s Isla Gladstone Conservatory in Stanley Park.

The community legacy fun run takes place in May, and is staged to remember and celebrate the lives of the 96 Liverpool fans, who were unlawfully killed in the Hillsborough tragedy on 15 April 1989.

Run For The 96 also remembers the families of The 96 and the survivors, who have tirelessly fought for justice with the utmost dignity.

New elements were revealed to special guests and Press, ahead of the 2018 event – including the date, new charity beneficiary, and Run To Remember 96K Relay to take place in Wirral the week before the 5K.

For the first time, Run For The 96 will take place on a Saturday – May 12 has been confirmed, and is the day before the final fixtures of the football season.

Run For The 96 5K takes place in Stanley Park, a fitting location between the home grounds of Liverpool Football Club and Everton Football Club. Last year, a new 1 Mile distance was also introduced alongside the 5K.

Bootle-born Carragher will be taking part in Run For The 96 5K with his Dad, Phil.

The 23 Foundation comes on-board as one of the event’s official charities. Jamie started the 23 Foundation in 2009, naming the charity after the squad number he made famous while playing for The Reds until he retired in 2013.

He made 737 appearances and scored five goals for Liverpool FC, and was capped for England 38 times. Jamie commented: “I am delighted the 23 Foundation has become part of Run For The 96. It’s been in the planning for several months so I’m excited to officially launch our involvement.

“Last year we supported more than 1,100 families, food banks and other vital projects. Our aim is to help young people have a better life and encourage them to achieve their dreams.

“Training is underway and I’m looking forward to pulling on my trainers to take part in Run For The 96 with my Dad.

“Celebrating the lives of The 96 is very close to my heart as a Scouser and former Liverpool player.”

The 23 Foundation joins Everton in the Community and Stanley Park Liverpool CIC as beneficiaries from funds donated and/or raised by participants.

Together, all three organisations support the event’s original vision of creating a positive community legacy event, and commitment to ensuring that local communities benefit from the legacy run.

Everton Ambassador Graeme Sharp said: “It’s great to see this event come back for a fourth year and to see the three organisations come together for such an important cause – to remember The 96.

“Good luck to all of the runners who take part on the day, it will be great to see as many people from the city taking part as possible.”

Stanley Park Liverpool CIC was set up two years ago to develop links between the park and local community, while encouraging people to further utilise Stanley Park as a community resource.

Run For The 96 5K is the brainchild of Dom Williams, who has organised the annual mammoth Hillsborough to Anfield run for a number of years.

Dom developed the idea of Run For The 96 with race organisers BTR Liverpool to create a new 5K community legacy fun run as a way to engage the wider community to run to remember The 96. BTR organise and deliver the Run For The 96 event.

This year Dom and his team will take part in a new Run To Remember 96K Relay along the Wirral Promenade on Sunday, 6 May – the week before Run For The 96 5K and 1 Mile Fun Run. The route will incorporate the new Hillsborough Memorial Gardens at Wallasey Town Hall – and each kilometre will be dedicated to The 96. The challenge will start at 9am and is likely to last 10 hours.

The public are welcome to join Dom and the team for as many of the 1K loops. The event will be free but donations to the Run For The 96 beneficiaries will be encouraged. Full details will be announced in the coming weeks.

Run For The 96 is supported by Margaret Aspinall, Chair of the Hillsborough Family Support Group (HFSG), who lost her 18-year-old son James in the tragedy, and HFSG Secretary Sue Roberts, who lost her 24-year-old brother Graham.

Margaret has attended Run For The 96 each year and last year she walked the 5K route for the first time. Sue has taken part each year.

Margaret said: “This is the fourth Run For The 96 – and it just becomes even better and more special with each year. I am looking forward to walking the 5K for the second time.

“Join us to remember The 96 and raise much-needed funds for good causes in our community. Let’s make this the biggest and best year yet.” Steve and his four-legged friend, dog Justice Jimmy, will also be taking part for the fourth year. And in recent years, Steve has also been part of Dom’s distance running team.

Steve added: “Run For The 96 has become a very special date in the diary.

“It’s incredibly moving to see runners and their families come together to celebrate the lives of The 96, while also remembering the families and survivors.

“The new Run To Remember 96K Relay is a marvellous addition to the event which everyone can support.”

Over three years, donations and funds raised through the Run For The 96 5K event has totalled £22,000 for good causes.

Entries are now open to register for the Run For The 96 5K and 1 Mile Fun Run. The entry fee pays to stage and deliver all aspects of the event including bespoke commemorative medal and T-shirt.