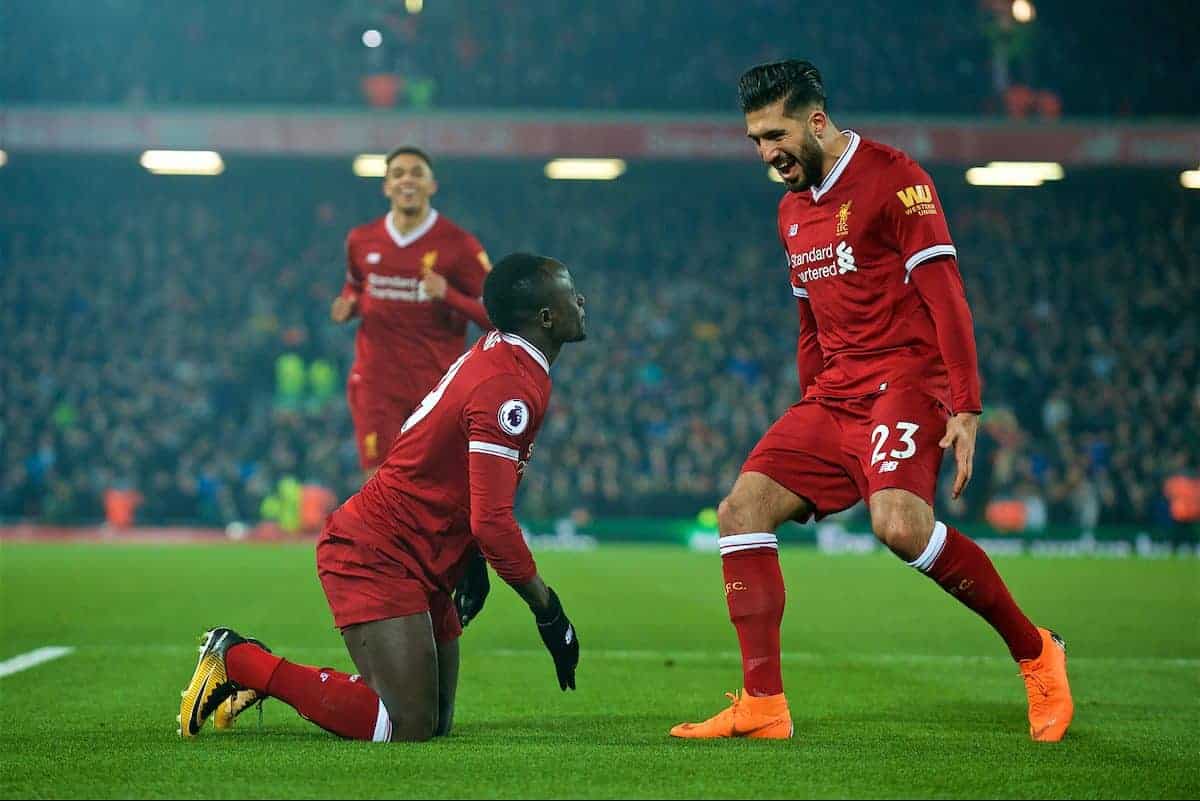 Liverpool made it four consecutive wins in all competitions to ruin Rafa Benitez’s Anfield reunion with a 2-0 win over Newcastle United on Saturday.

There were a number of impressive individual displays at Anfield, but Alex Oxlade-Chamberlain caught the eye in particular with an influential and dynamic display.

The summer signing was a busy presence throughout but most pleasing to see was his power and determination from the middle of the park which drove the Reds forward.

It was best illustrated in his assist for Mohamed Salah’s opener—his fourth for the 32-goal man so far—as he collected possession and took responsibility with a purposeful run before sliding the Egyptian on goal with a perfectly timed and weighted pass.

Such incisive bursts were regularly produced, and it’s a key feature of Oxlade-Chamberlain’s play as also seen for his superb solo strike against Man City.

It’s this ability to inject such tempo into play and turn stable possession into an attacking break in the blink of an eye that can be crucial to breaking down the deep-sitting sides—as it did here.

Eyebrows were raised when Klopp handed Oxlade-Chamberlain the central role he had long craved, but it is clearly his best position as he proved once again at Anfield.

But it’s had totally the opposite effect as the remarkable ‘Lethal Three’ have flourished under extra pressure, performing beyond Kopites’ wildest dreams without the man who supposedly made it click.

Goal today from Salah and Sadio Mane—courtesy of Roberto Firmino’s assist—mean that since becoming a trio on the turn of the year they have scored 22 of Liverpool’s 28 goals, also boasting a staggering 68 goals between them this season.

They have consistently produced big moments and, in turn, big results and yet even as the pressure increases and the business end of the season arrives, they show no signs of stopping.

Maintaining this incredible ability to perform so effortlessly under intense pressure will be key to carrying the Reds over the line in the top-four race.

It could bring even greater rewards in the Champions League, and don’t bet against them delivering.

It is standard procedure in football for the goalscorers to grab the headlines, but that the Reds collected another vital three points at Anfield was partly down to their German ‘keeper.

With the Reds having switched off after taking the lead, Loris Karius came up trumps to pull off a truly world-class save from Mohamed Diame’s curler that was destined for the top corner.

Coming right on the stroke of half-time, the full-stretch stop ensured Liverpool got in at the break ahead and provided an injection of belief in those around him to pick it up again.

This was just the latest in a series of impressive stops at big, big moments from Karius—adding to his Harry Kane penalty save and the stunning finger-tip stop to deny West Ham’s Marko Arnautovic last weekend.

Karius is beginning to show the quality Klopp always knew he had, but now enjoying a run of games that should have come earlier, he’s showing he could yet be the long-term solution between the sticks. A reunion with Rafa is always a special occasion—even more so when it’s at Anfield—but it’s fair to say they have been more enjoyable for the man himself than Liverpool.

Indeed, all three get-togethers had gone perfectly for Rafa since he has taken over at Newcastle—a day of celebration topped off by a positive result in taking a point from the Reds on three separate occasions.

Alas, there can be no denying it was about time Kopites experienced the best of both worlds, as Klopp acknowledged pre-match in calling for his team to present no more gifts to Rafa with surrendered leads.

And that now happens after Klopp’s men claimed Liverpool’s first-ever win against Benitez at the sixth attempt.

Victory in this crucially timed reunion was vital and ensures the final 10-game sprint gets off to a perfect start while momentum is maintained ahead of two big games.

Sorry to ruin your day Rafa, we all still love you.

Two key games in contrasting ways follow as the Reds try to navigate the Porto second leg as smoothly as possible before a huge battle with Man United.

Rotation in that Champions League tie will be key to being successful in the more testing fixture at Old Trafford and Liverpool’s dominant position gives Klopp every opportunity.

Klopp insists wholesale changes won’t be made in midweek, likely to avoid complications on what should be a straightforward night.

But with an almost unassailable lead, the chance must be taken to manage key players ahead of Saturday’s showdown and give fringe members a run-out to keep up to speed.

Though Porto arrive in form and determined to restore pride, the Reds are strong enough to avoid a PSG-style collapse even without defensive stalwarts Virgil van Dijk, Andrew Robertson and Emre Can.

Most crucially, two of the front three can also be preserved to recharge—with Adam Lallana, an in-form Oxlade-Chamberlain and Danny Ings all available.

Liverpool often produce their best when freshest, and arriving at Old Trafford with main men in peak condition after a professional second-leg win will be key to doing so again.