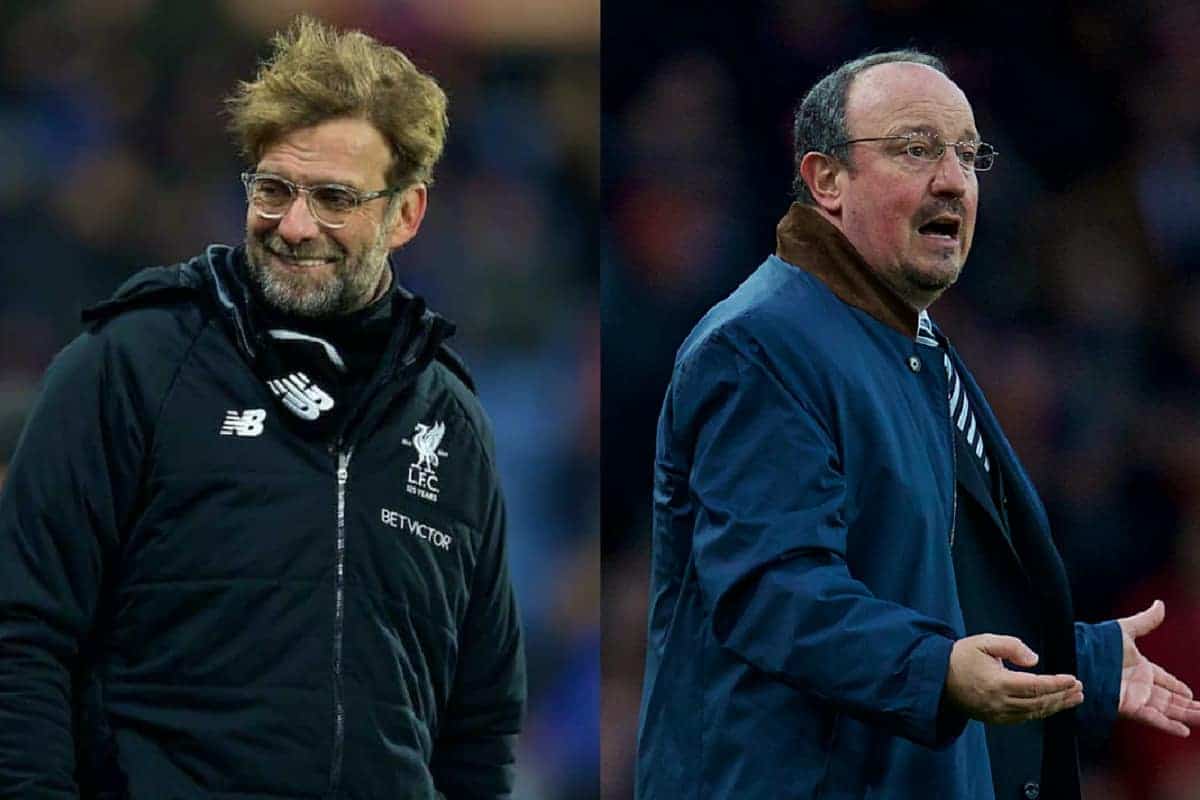 We are into the final 10 rounds of Premier League fixtures this season, and the next three days could have big ramifications on the top-four battle.

Liverpool enjoyed a 4-1 win over West Ham last weekend, as they enhanced their chances of a top-four finish in 2017/18.

On Saturday evening, Rafa Benitez returns to Anfield with current club Newcastle United, in a vital match for both sides.

There are 10 games on the horizon to look forward to over the weekend—here’s some of the entertainment to keep an eye on.

One To Watch: Man City vs. Chelsea Man City picked up their first piece of silverware under Pep Guardiola last Sunday, dispatching of a woeful Arsenal side 3-0 in the League Cup final.

Having demolished the Gunners at the Emirates in the league on Thursday night, focus now switches to Chelsea at the Etihad this weekend.

For Liverpool, this is a game where we need to be cheering on the soon-to-be Premier League champions, given the threat Chelsea pose in the top-four race.

Should the Reds beat Newcastle and City win, the gap between Jurgen Klopp‘s side and the west Londoners will be a sizeable seven points.

On paper, City should be too far strong, despite Chelsea‘s quality, and the only thing that will prevent them from winning is a drop in intensity.

It should be a cracking contest, with the hosts looking to avenge the 3-1 defeat there last season that ignited the Blues’ title charge.

One To Avoid: Burnley vs. Everton What is it with Sky Sports and BT Sport being hellbent on showing Everton live?

Liverpool’s Merseyside rivals are one of the dullest teams in the division, and on Saturday lunchtime they take on a fellow contender for that unwanted award.

Burnley‘s efforts this season have been admirable, but it would be hard to justify cancelling plans to watch them strut their stuff.

The weekend meeting at Turf Moor has every chance of finishing 0-0, with neither side relegation-threatened or with any hope of finishing in the top seven. United really are a bemusing team—they hardly ever play well, but they are masters at racking up points.

Sunday’s victory at home to Chelsea was the perfect example of this, with a couple of goals out of nothing masking a very mediocre performance.

Jose Mourinho and his side have to wait until Monday night for their next game, with a trip to Crystal Palace a tricky outing.

Selhurst Park under the lights can make for quite an atmosphere, and with the Eagles desperate for points they should make life tough for United.

The visitors should win in the end, probably narrowly, but it is one of those matches that gives hope as a rival supporter.