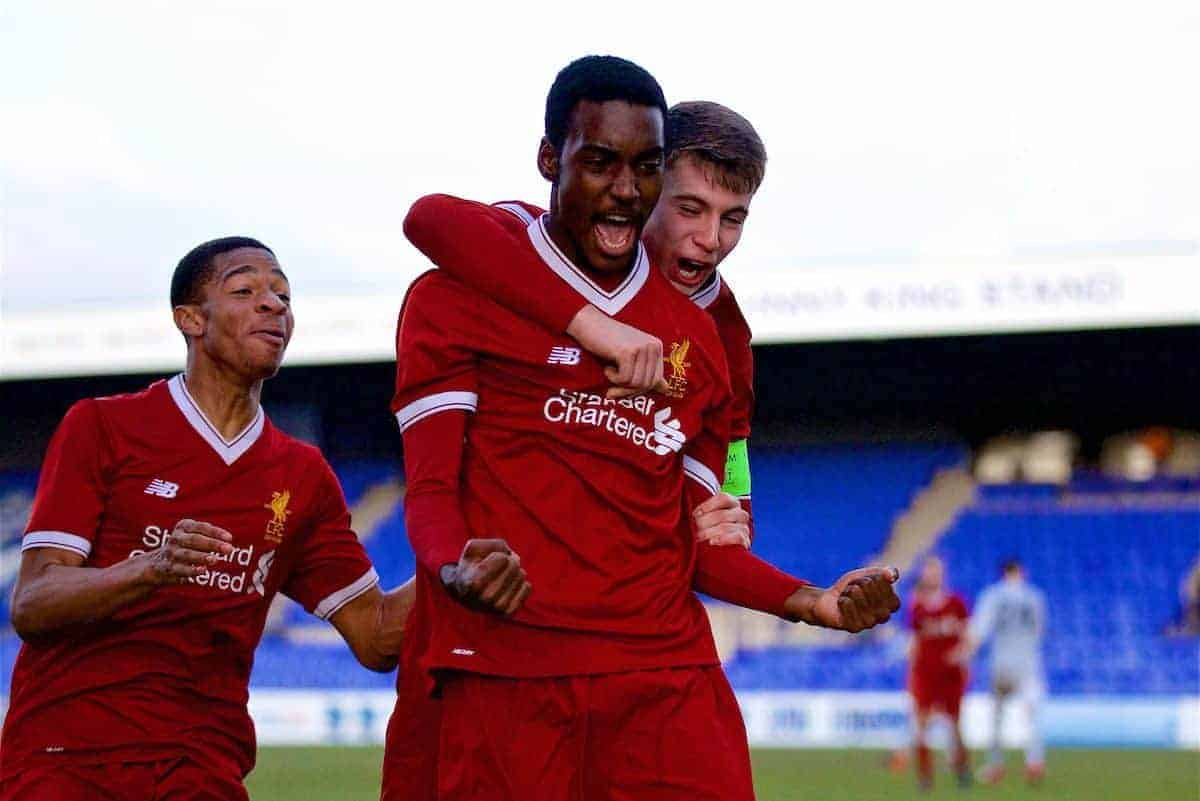 The Liverpool U19s play Man City in the quarter-finals of the UEFA Youth League on Wednesday afternoon, with Steven Gerrard’s side in fine form.

With a mass exodus from the U23s ranks and a subsequent host of promotions from his ranks, Gerrard has seen his U18s side suffer in the first months of 2018.

Since the turn of the year, they have played seven, won three and lost four, including defeat to Arsenal and Tottenham in the FA Youth Cup and the Premier League Cup respectively.

The 37-year-old has overseen back-to-back victories in their most recent two games, however, with Remi Savage, Jack Bearne and Niall Brookwell, promoted from the U16s, his goalscorers.

His attention now turns to the U19s, however, and a make-or-break European clash with City at the Academy Stadium, with the looming presence of the Etihad a reminder of their future ambitions.

Victory over City would see Liverpool book their plane to Nyon, where a semi-final clash with one of Barcelona or Atletico Madrid would await, before a hopeful final on April 23.

Gerrard can head into this clash full of confidence, with his young Reds having won six times and lost just once in their seven games in the tournament so far.

They reached the quarter-finals through an excellent 2-0 victory over Man United at Prenton Park, while City progressed via a penalty shootout, after being held to a 1-1 draw by Inter Milan.

While his U18s sides have been chopped and changed of late, Gerrard has been able to call upon a clutch of heavy-hitters in the UEFA Youth League.

Ben Woodburn has captained the side in all seven games so far, with the 18-year-old providing a reminder of his talents with a goal in a star turn against United last time out.

The other scorer that day, Portuguese winger Rafa Camacho, has trained with the first team on a number of occasions since beating Alex Fojticek with a stunning effort, and will be eager to shine.

As will the likes of Adam Lewis, Curtis Jones, Herbie Kane, Elijah Dixon-Bonner and Liam Millar, who have all enjoyed regular game time with the U23s this year. Speaking ahead of Wednesday’s clash Millar, who received his first call-up to the Canada senior squad on Monday, told LiverpoolFC.com that “everyone is absolutely buzzing for this game.”

“We are a big club, there are other big clubs in this tournament, but if we keep playing well then I don’t see why we can’t win it,” he said.

“Don’t get me wrong, Man City are a good team, but there’s no reason why we can’t beat them if we all play well.”

Kickoff at the Academy Stadium is 1pm, with the game shown live on BT Sport 2.

Tickets are still available for this match and can be purchased as follows:

Online: Tickets are available online here with a [email protected] ticket option for this match.

In person: At Ticket Office located on the first floor of the City Store from 9am until 11.30am.

From 11:30am until 1:30pm, tickets will be available via the Ticket Office located under the Nexon Tyre bridge at the Academy Stadium. The Ticket Office accept both cash and card.