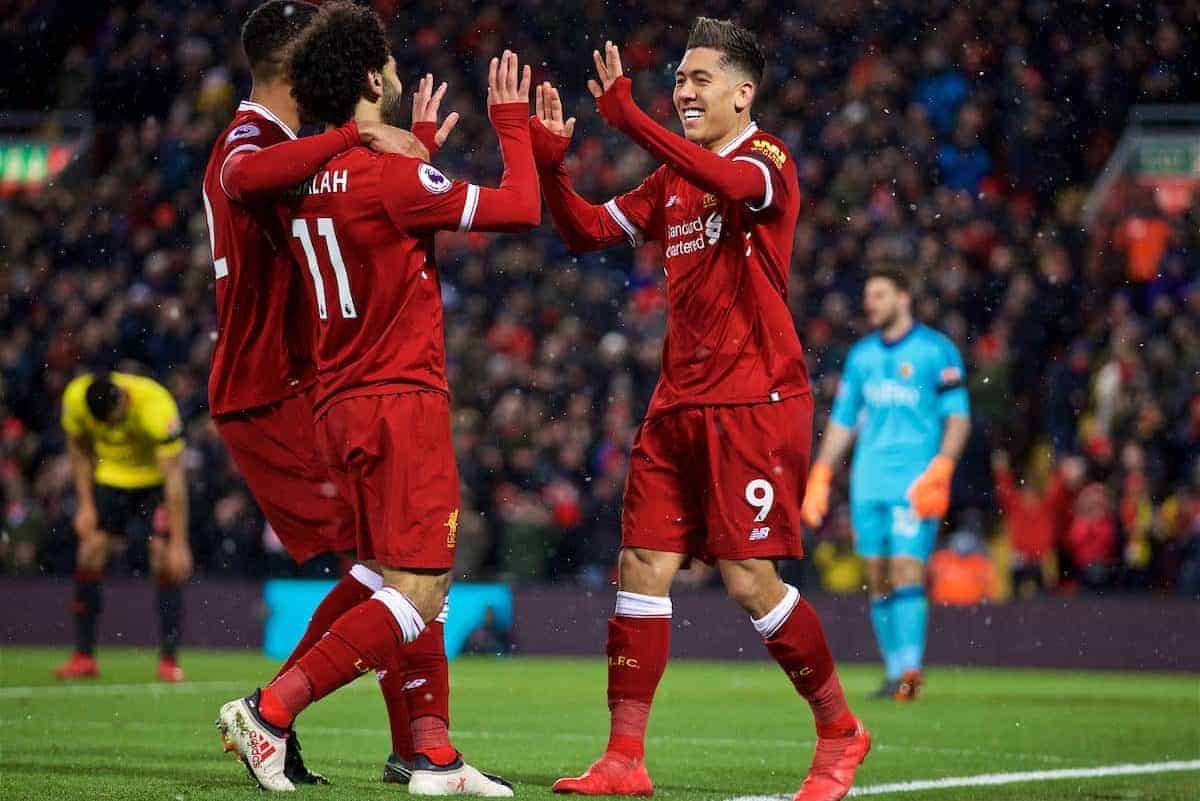 Anfield witnessed one of the finest individual performances of any Red as four-goal Mohamed Salah inspired Liverpool to the 5-0 rout of Watford.

The Reds returned to Anfield looking to bounce back to winning ways to ensure defeat at Old Trafford proved nothing more than a bump in the road.

And Jurgen Klopp’s side did that, as Salah’s stunning four-goal display ensured Liverpool breezed past the Hornets to get the final push for Champions League football back on track.

A minute of applause was held at a snowy Anfield pre-match, as all present paid respects to former Red John Molyneux who passed away this week aged 87. It was an electric start as the Reds took the lead after four minutes, when Salah roasted Miguel Britos and finished for his 33rd goal of the season—becoming only the third Red ever to hit 25 Premier League goals. The Reds took control of proceedings against the toothless Hornets, with Gini Wijnaldum impressing with a busy performance on his return to the team. And Liverpool added a deserved and delightful second on the stroke of half-time, as a fine team move ended with Salah tapping home for his 34th goal from Andy Robertson’s sublime cross. The majestic Salah turned from scorer to provider shortly after the restart, crossing for Roberto Firmino to add a third with his 23rd goal of the season with a magnificent back-heel. Salah then stole the show as he netted a memorable first Reds hat-trick in front of the Kop 13 minutes from time, slaloming through Watford‘s back line Messi-like and rolling into the net. But the Egyptian King wasn’t finished aand he lashed home his fourth for his 36th, yes, thirty-sixth, of a truly remarkable campaign—and there was a familiar smile for all to see…

It put the icing on the cake of one of the best individual displays Anfield has witnessed, and Salah took the acclaim of the adoring Kopites at the final whistle. The win moved the Reds back up to third in the Premier League table, and put pressure on rivals as Klopp’s side re-established a sizeable seven-point cushion on fifth-placed Chelsea. The dreaded return of international football now rudely intervenes, but Klopp’s side will look to pick up from today’s victory when the Reds return to action at Crystal Palace on March 31.