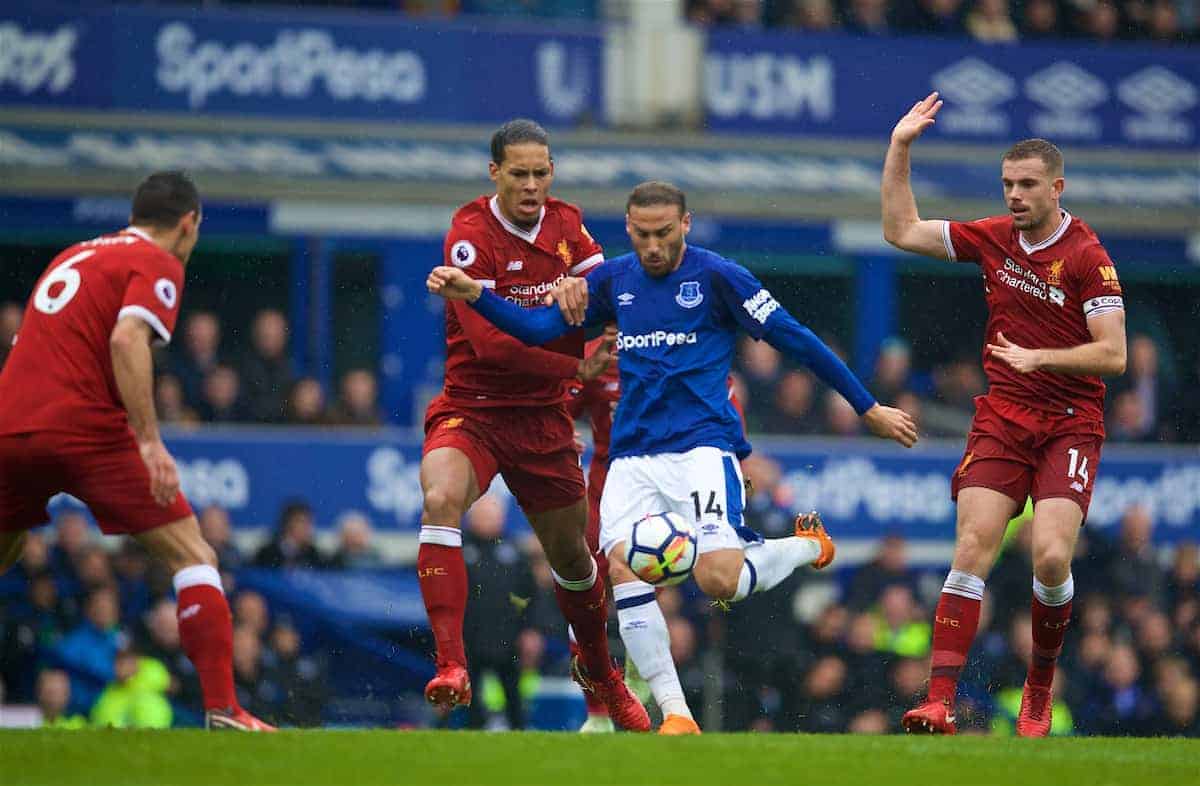 The media felt Liverpool did what was required and were impressed with Gini Wijnaldum in the 0-0 Merseyside derby draw at Everton on Saturday.

It was a low-key derby played in a strangely subdued atmosphere, but the point was a useful one given the circumstances and at least ensured the unbeaten run against the Blues was extended.

Thoughts instantly turn to Tuesday’s make-or-break clash at the Etihad Stadium, but before that, here’s what the media made of the bore draw in Liverpool. The Liverpool Echo’s James Pearce praised Klopp’s depleted side for a “gutsy effort” which ensured forward momentum and belief was maintained:

“Considering the personnel on duty, Jurgen Klopp could reflect on a gutsy effort from a heavily depleted line up at a rain-soaked Goodison.

“The Reds will march on to the Etihad for their crunch Champions League quarter-final second leg on Tuesday night with momentum maintained. A tricky hurdle has been cleared and belief remains intact.”

The Independent’s Jonathan Liew was among the journalists to assess a point gained and avoiding any more injuries made for a pleasing if unspectacular afternoon:

“As for Liverpool, they will at least be glad to have emerged from a potentially hazardous encounter with a point and no further injuries.”

The Anfield Wrap’s Neil Atkinson was impressed by how Klopp’s side “eased themselves through the game” to avoid any over-exertion:

“Liverpool eased themselves through the game like an oil tanker through a busy dock.

“Liverpool though didn’t play like their lives depended on it. They played like they had something else more pressing and this is not unreasonable.”

The Mail’s Jack Gaughan felt the Reds would have won easily had just Mohamed Salah, never mind a full-strength team, been available to Klopp:

“Make no mistake, Liverpool would’ve romped to victory had Salah been available.”

Our own Karl Matchett labelled the Dutchman’s performance as stand-in anchor man “the biggest positive” to come out of the stalemate:

“The biggest positive to come out of the dire draw was undoubtedly Gini Wijnaldum‘s performance as the No. 6, the Reds’ holding midfielder on the day.

“He was strong in the tackle, surged forward into the limited spaces available to open up play for his team and was always available covering Everton‘s rare counter-attacks.

“Of course there will be far more to deal with at Man City, but this was a promising display in a position of weakness ahead of next week.”

The Liverpool Echo’s Ian Doyle thought Wijnaldum showed he has the physical attributes to play the No. 6 role, but saw slight concerns with the Dutchman’s positional play:

“Wijnaldum’s physicality is one of his greatest attributes, and that came to the fore here as, in the first half particularly, he withstood what buffeting the Blues could offer and was able to move the ball on with the minimum of fuss.

“His occasional tendency to dawdle is far more likely to be exposed by a fired-up City than an Everton midfield lacking energy for the most part. But at least Wijnaldum won’t be stepping in cold at the Etihad.” “Dominic Solanke and Ings both started, both needing a goal and a performance to show they can reasonably be seen as understudies to Roberto Firmino, Mohamed Salah and Co., and both were woefully below-par in the first half.

“Unfortunately that pattern continued into the second half, with the exception of any clear chances to lament being missed.”

Patrick Boyland, for the Sportsman, felt Ings and Solanke’s displays show more quality is needed in attack with a worrying lack of goal threat without Salah and Firmino:

“Instead of impressing ahead of Tuesday night’s Champions League game, what was most apparent was just how far the drop off in quality is between Liverpool’s best and their rest. Salah and Firmino need not fear for their places any time soon.

“At least Klopp now knows where he must strengthen over the summer if he is to follow through on this campaign of promise.”

ESPN’s Glenn Price thought Solanke’s display in particular showed how difficult a task Klopp has in finding a like-for-like backup option to Firmino:

“They would ideally love to find a like-for-like replacement for Firmino, though that is easier said than done. The Brazilian is one of a kind, as he showed when during his brief cameo at Goodison Park.”

Gaughan felt the game highlighted a slight concern with how much Liverpool lack without Salah in particular:

“Liverpool are a completely different proposition without him, in much the same way City are without Kevin De Bruyne, and are devoid of that spark which makes them so irresistible.”

Meanwhile, Doyle praised Ragnar Klavan for stepping up to the big occasion with a typically reliable performance:

“But if Klavan has demonstrated anything since arriving at Anfield, it’s his appetite for the big occasion. So it proved once again.” Our man Chris Williams reserved praise for Loris Karius, assessing that the German is “comfortably asserting himself as Liverpool’s No. 1”:

“Comfortably asserting himself as the Liverpool No. 1 now. Fast distribution but also happy to hold on to the ball to take the sting out of the game.

“Little to do bar a wonderful fingertip save that denied an Everton opener in the first half—game-saving stop.”

And finally, Liew thought Virgil van Dijk was “immense” at the heart of the Reds’ defence:

“Van Dijk was immense throughout, winning virtually all of his 50-50s and again injecting the sort of gentle assurance that the Liverpool defence has so often lacked in recent years.”