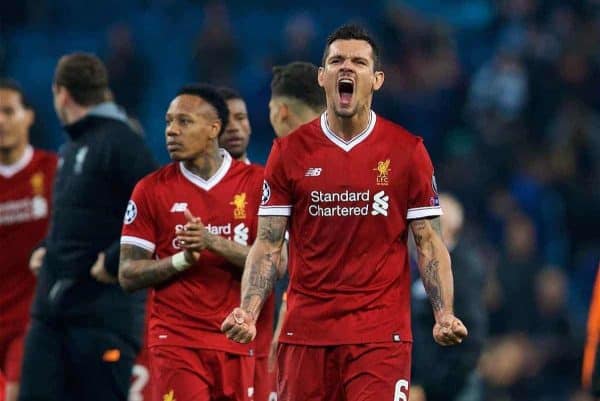 Defender Dejan Lovren has lifted the lid on the dressing room exchanges which sparked Liverpool into a second-half comeback against Manchester City.

Trailing 1-0 having been swamped by Pep Guardiola’s side for 45 minutes, Jurgen Klopp’s players were reeling as they came in for the interval of their Champions League quarter-final second-leg.

However, after a verbal kick up the backside from Lovren and some tactical input from Klopp, the second half proved to be a totally different affair with Mohamed Salah and Roberto Firmino scoring to secure a 2-1 win and 5-1 aggregate victory.

“To be honest I was shouting a bit at half-time,” said Lovren. “I told the lads to wake up because it was not good enough and I said we were sitting too deep.

“Of course Klopp said ‘Yes you are sitting too deep because you are not pushing up’. He wanted me and Virg (Virgil van Dijk) to be more compact and push the team up, but it was quite difficult to push up when City had the ball.

“It was all positive, there was nothing negative, but I needed to remind the guys that we had 50 minutes to be in the semi-finals of the Champions League and we needed to give more.

“The first 10-15 minutes wasn’t good enough. When you see the second half, again they had a couple of chances but nothing too serious.” The victory was Liverpool’s second in a week over the Premier League champions-elect and their third over Guardiola’s side – who have lost just seven matches in all competitions – this season.

It extended Klopp’s impressive personal record against the Catalan to eight wins and one draw from their 14 meetings, better than any of his contemporaries.

The frustration for Liverpool is that they have not been able to convert that into more of a challenge on the domestic front, trailing City by 17 points in the league.

“The regret is definitely the first six or seven games of the season in the Premier League,” added Lovren.

“We had many draws and they took us out of the first place. I would say we didn’t have any luck with injuries again and City didn’t have injuries all season.

“They deserve to be champions but we are in good shape now and hopefully we can go to the final and it can be a good season for us. Also, we need to finish in the top four for next season.” With 12-time winners Real Madrid and Bayern Munich, who have won it five times, expected to complete the semi-final line-up alongside Liverpool and Roma, who stunned Barcelona, Lovren is clear who he wants to avoid in the last four.

“From a personal point of view I don’t want Real Madrid in the semi-finals. They have a lot of experience in the Champions League, a lot of records and over the past three seasons it is always them,” he said.

“But whoever we get will find it difficult to come to Anfield and score some goals.

“When you concede one goal and score five against Manchester City I think we should respect Liverpool more.

“People talked from the beginning about Manchester City being favourites and they were favourites, but I think after this there should be more respect for Liverpool.”