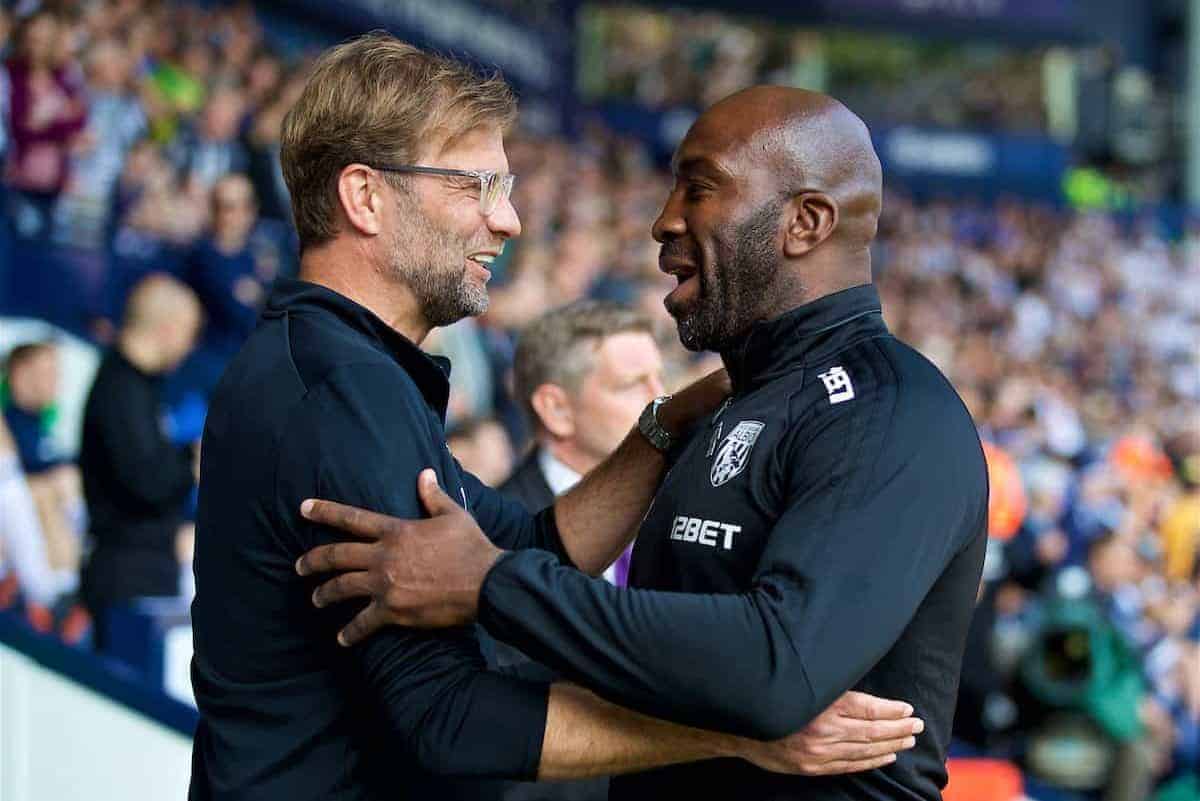 Liverpool manager Jurgen Klopp complained about a dry pitch, refereeing decisions and West Brom’s “useless” comeback after watching his side throw away a two-goal lead at The Hawthorns.

Goals from Danny Ings, his first in 930 days, and Mohamed Salah’s Premier League record-equalling 31st of the season appeared to have put the visitors in control with just 18 minutes to go.

However, Jake Livermore and Salomon Rondon, in the 88th minute, snatched a 2-2 draw for the top-flight’s bottom club.

The point did little for the Baggies’ chances of survival such is their deficit with the three matches to go, as they could still be relegated by Sunday, but a win for Liverpool would have left them needing one more victory to guarantee Champions League football.

In amongst the comeback was a Craig Dawson challenge on Ings which Klopp thought should have been a penalty, while another flashpoint early in the second half saw Ahmed Hegazi appear to throw a punch at the striker – missed by referee Stuart Attwell – while they tussled on the ground.

“I don’t think that point will help West Brom massively, it is a complete waste of points: they don’t need it, we would have needed it.

On the match incidents, Klopp told assembled journalists: “On the penalty we agree – and Hegazi on Ings, it is a red card. You see it, I see it, it is not a problem.

“It is only important what three or four gentlemen with a whistle think.

“And the second (West Brom) goal was no foul (for the free-kick which Rondon headed in).”

The Reds boss was also not happy about the state of the playing surface.

“You have to create the best circumstances to help the boys deliver and then we let the home team decide whether they water the pitch or not,” he said.

“It is not only for football it is also dangerous for injuries if the pitch is really dry. I wouldn’t have said nothing about that probably if we had won but it is all you see during the game.” West Brom caretaker manager Darren Moore took his record to five points from three games, which includes two of the top four, and was encouraged by what he has seen despite the fact they seem destined for the Sky Bet Championship after eight seasons in the top flight.

“Another good result because we as a football club have come together and by us being together it has brought another positive result,” he said.

“The atmosphere in here was superb; the staff, in terms of their preparation, have been great and the players have continued that on to the pitch. Together we have earned that.”

Asked whether not watering the pitch was pre-meditated he added: “It wasn’t a ploy. It was a really hot day today. I was so engrossed in the game in terms of preparation my focus was not about the pitch.”