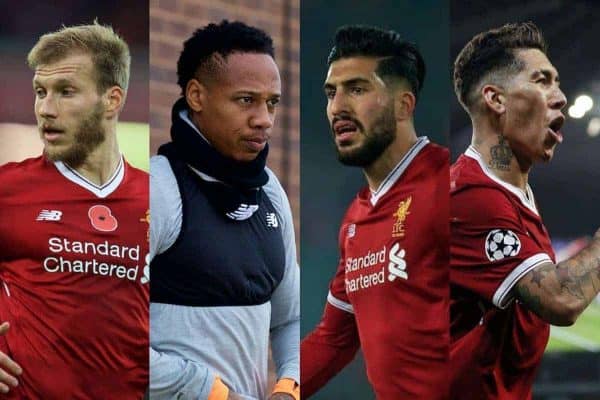 Latest injury update from Jurgen Klopp ahead of Liverpool vs. Bournemouth

Jurgen Klopp is still facing a host of absences as he prepares his Liverpool side to take on Bournemouth in the Premier League on Saturday evening.

The Reds return to domestic action at Anfield this weekend, looking for another three points to stabilise their challenge for a top-four finish.

Their visitors are mid-table Bournemouth, who have won just once in their last six games and are without two key players in Adam Smith and Junior Stanislas.

With Liverpool have already played an intense 90 minutes at the Etihad in Tuesday night’s 2-1 win over Man City in the second leg of their Champions League semi-final, however, fitness could be an issue.

Speaking to LiverpoolFC.com prior to his pre-match press conference on Friday, Klopp revealed that both Ragnar Klavan and Nathaniel Clyne would miss out, but Roberto Firmino is fit to feature.

“It’s quite difficult at the moment, we must wait pretty much [every] five minutes for some news. At the moment it looks OK,” he said.

“Unfortunately, I think, not 100 percent sure, that Raggy felt a little bit [something] muscle-wise.

“And Clyney [is], probably, out. [He felt an injury] in training the day after the game.

“Bobby had a little [issue] with his neck but should be OK, I think.”

He later reiterated that Joel Matip, Emre Can and Adam Lallana would all miss out due to long-term injuries, but is optimistic the latter pair could take part before the end of the season.

“Matip is for sure out,” he explained. “The other two there is at least a little bit of hope.”

Klopp made five changes to his starting lineup for last weekend’s 0-0 draw with Everton, after a 3-0 win over City at Anfield three days previous, with Clyne and Klavan among those to come in.

But with the Reds’ semi-final opener at home to AS Roma not until April 24 he insisted he would not rotate his selection as heavily this time out.

“If somebody expects from now on we’ll make this kind of selection because Rome is in the back of my mind, or even Kyiv, that would make my life really difficult.

“The only way to win football games is to be completely focussed on what you are doing.

“We have to stay cool, do our job. We are not through, not in the top four. We need rhythm, we need shape, we need momentum to be in the right moment in the best shape.”

He did confirm that Jordan Henderson is likely to return to the side after missing out midweek, adding: “He has the freshest legs in midfield, it would be silly if I didn’t use him.”