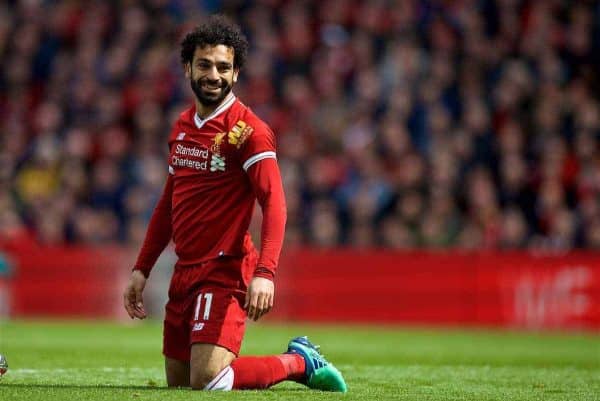 Liverpool were held to a 0-0 draw by Stoke City at Anfield on Saturday, with referee Andre Marriner at the heart of a frustrating afternoon.

After their remarkable 5-2 win at home to Roma in the first leg of their Champions League semi-final on Tuesday night, the Reds were back in domestic action for the weekend.

With one eye remaining on their trip to Stadio Olimpico on Wednesday night, Liverpool needed to take three points from the visiting Potters to ensure their top-four bid remained on track.

Preserving a host of his big names for Europe, the manager took a gamble as he navigated a growing injury list, looking to keep up the pace ahead of both Tottenham and Chelsea.

In a sun-drenched Anfield on Saturday afternoon, they struggled to make their mark.

Klopp retained his 4-3-3 shape despite expectations of a switch to a back three, with Trent Alexander-Arnold shifting in to midfield to join Wijnaldum and Jordan Henderson.

Henderson set Mohamed Salah away for a one-on-one with rumoured summer target Jack Butland within five minutes, but the Egyptian surprisingly dinked his effort over the goalkeeper and wide.

After a poor showing at West Brom in his last outing, Gomez once again struggled early on, and his over-commitment allowed Moritz Bauer through to cross for Mame Biram Diouf, who headed off target.

Liverpool kept the pressure up throughout the first half, and after a sustained period of picking the lock in front of Stoke’s defence Wijnaldum fired just beyond the post from range.

Ings had the ball in the back of the net after a blocked Wijnaldum shot bounced into his path in the box, but the linesman flagged was raised to end a frustrating first half for the Reds at 0-0.

After a damp opening 45, the atmosphere in Anfield began to improve after the break, but Stoke held firm before the hour mark as the Reds toiled for openings.

With Alexander-Arnold struggling for fitness and Ings producing another sub-par display, Klopp shuffled his pack midway through the half as Nathaniel Clyne and James Milner came on.

Clyne had a chance to break the deadlock minutes later, but stooping to send a header on goal he was unable to generate any power to trouble Butland, while Moreno fizzed one wide soon after.

Liverpool had a stonewall penalty waved away late on, as Wijnaldum’s cross struck the trailing arm of Erik Pieters, denying Klopp’s side a likely winner.

Six minutes were added on for stoppage time, reflecting a stop-start afternoon at Anfield, but the Reds were unable to find their vital opportunity.