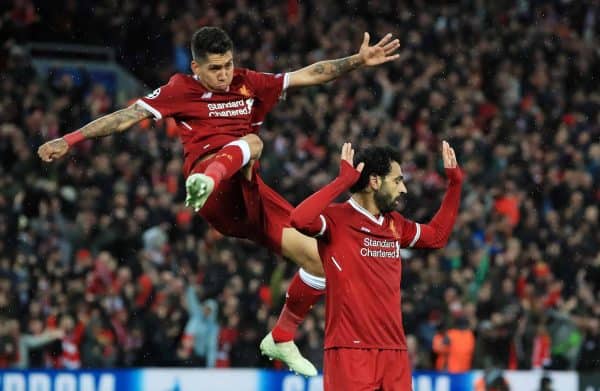 Liverpool produced one of their all-time great attacking displays at Anfield, as they thumped Roma 5-2 in the Champions League semi-final first leg.

After an excellent run the German wasn’t at his best against West Brom at the weekend, but he was generally reliable on Tuesday.

He enjoyed an early save from Kevin Strootman to settle the nerves, but almost made a dreadful error when he allowed Aleksandar Kolarov’s shot through him and onto the crossbar.

He was otherwise not tested too much—he could do nothing about either Roma goal—and his distribution was good.

Restored to the side in place of Joe Gomez, Alexander-Arnold was playing quite comfortably the biggest game of his career, but handled the pressure admirably.

There were a few shaky passes and his crossing wasn’t as good as it can be, but that was to be expected from a teenager in a Champions League semi-final.

What a breakthrough season the local lad is having.

Jurgen Klopp heaped praise on Lovren’s qualities as a centre-back on the eve of the game, and he cost his side despite being solid on the whole.

The 28-year-old almost produced a rash moment that nearly cost his side a penalty, but his questionable concentration levels allowed Edin Dzeko to score Roma’s first.

Hit the crossbar with a header, but should have scored.

Liverpool’s most expensive player of all time was bought to thrive on nights such as these, and thrive he did.

The giant centre-back cut such an authoritative figure all evening, helping keep the equally tall Dzeko relatively quiet, and all facets of his game stood out.

World-class defender—a tiny bit too casual at times, if we’re being ultra-picky.

Like Alexander-Arnold, Robertson came back into the side after a rest at West Brom, and while his wasn’t his most noticeable outing, he impressed greatly nonetheless.

One trademark cross was turned in by Sadio Mane but the Senegalese had strayed offside, and he offered constant width down the left flank.

You just expect nothing worse than a seven-out-of-10 showing from him these days.

Returning after suspension ruled him out of the quarter-final second-leg win at Man City, the skipper was fantastic in the middle of the park.

He harrassed the life out of Roma’s midfield, leading his team brilliantly in the process, and the won the battle against the hugely experienced Daniele De Rossi and Strootman.

Some of his use of the ball felt a little rushed in the first half, but Henderson was superb regardless.

There was uncertainty over whether it would be Milner or Gini Wijnaldum who got the nod in midfield, but it was the former who Klopp opted for.

It was a decision that was vindicated, as the likeable veteran shone yet again in the middle of the park, rolling back the years with a wonderful mix of intelligence, work rate and general influence.

There were question marks about whether Milner had been a good signing or not a few months ago—the answer is blindingly obvious now, even if he did concede the penalty that Diego Perotti converted.

One of the Reds’ most in-form players at the moment, Oxlade-Chamberlain suffered a devastating night as he left the field in a lot of pain with just 18 minutes played.

A sensational personal season for the Egyptian King saw him named PFA Player of the Year on Sunday, and this was one of his greatest performances yet.

Salah tested Alisson twice in the first half, looking typically dangerous despite Roma dominating the early exchanges, but he then turned the tie on its head.

Two sensational finishes put Liverpool 2-0 up by half-time, and his all-round game was that of the world’s most-feared player right now. Assisted twice.

Mane has been one of Liverpool standout performers since the turn of the year, but this wasn’t his best day at the office. He was still perfectly effective, though.

He had a glorious chance after a lung-busting run but fired over, shot wide seconds later then had a goal correctly ruled out for offside.

His confidence appeared to be affected from that point on, but he kept working doggedly, still proved to be a handful and finally got his goal from close range.

This was Mane’s 22nd start in a row, going all the way back to December 30, in the 2-1 victory at home to Leicester City.

Firmino led the line as he has done all season, and he was at his joyous best, influencing things so much and outlining his status as Europe’s most underrated player.

The Brazilian missed from a tight angle then forced the impressive Alisson into a routine save from distance, and was superb on the ball and tireless of it.

His inch-perfect assist allowed Salah to make it 2-0, having already set up the Egyptian for his stunning first of the night, and he got two goals in before receiving a standing ovation after being substituted late on.

The Dutchman looked busy as soon as he came on, and one fierce left-footed strike was kept out by Alisson. Great energy and even some sublime pieces of skill.

Missed a great chance late in the day.

Didn’t manage to have any effect on the game.

What a job Klopp is doing, and his side are now on the cusp of the Champions League final.

The football Liverpool played was dazzling all evening, and that is all down to Klopp’s influence, and he has transformed the club in the last two-and-a-half years.

Could perhaps have shut up shop when 5-0 up, but then he could have done the same at 2-0 or 3-0, and look what happened afterwards.