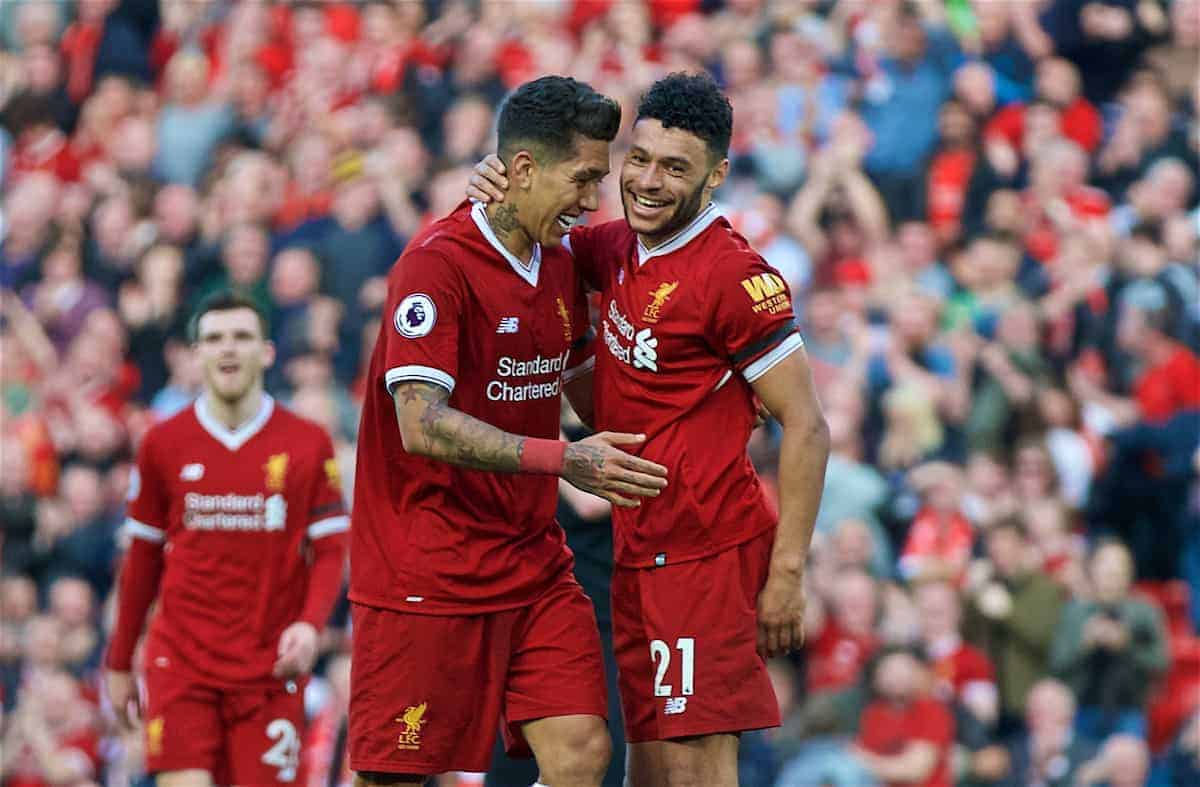 Liverpool cruised to a 3-0 win against Bournemouth, and Jurgen Klopp explains how his counter-pressing tactics helped them do so.

It was a strong lineup for the reds despite their recent shifts in the Champions League, which suggests the manager may rest players for the next game against West Brom, with a place in the top four looking reasonably comfortable. As he often does, Jurgen Klopp praised his side’s counter-pressing in his post-match press conference.

He didn’t quite go as far as to call it the best counter-pressing performance, as he has after certain games in the past, but he left those listening in no doubt that he was pleased with this side of the game.

He also explained that this method of defending might not be as intensive as people think, as the aim is to win the ball back quickly rather than absorb pressure for long periods:

“Controlling the game like this is the most important thing to do. We created lots of chances, good situations; we looked mature, fluent, flexible.

“What you need in a game like this, against a side who wants to counter-attack, which is normal if they are that much under pressure — the counter-pressing was outstanding, that the boys did there.

“It’s a big misunderstanding because people always think that it’s the most intense kind of defending, but it’s less intense defending because it’s the shortest way. The boys did fantastic.

“I think around about 75 minutes, fantastic game, and then somebody closed our powerhouse and the boys felt the intensity of the last few weeks.

“We didn’t control it anymore, so Bournemouth came. Time to time we made a few blocks in the box, there were a few dangerous situations.

“It was good that we kept a clean sheet and a little bit of luck you need always.

Mane In The Middle

Though he emerged from this game having made just one key pass — a short lay-off to Oxlade-Chamberlain who then tried his luck from distance — his best pass won’t go down as a key pass in the statistics, but deserves recognition.

After a mid-season slump, Mane has slowly become the Salah of Liverpool’s left flank.

His attacking play leads to what looks like a diamond formation when looking at the average positions in terms of attacking touches.

Firmino often drops deep to form the tip of the diamond in midfield, with Mane and Salah as the strikers, as indicated by the arrows in the formation image above.

However, he’s emerged as a creative force as a well as a player who can finish.

This means that a good portion of his play takes place in the middle of the park, and it’s from this position that he was able to scoop a perfect pass over the Bournemouth defence into Salah’s path. His team-mate’s poor first touch meant nothing came of this excellent piece of play, but this takes nothing away from the idea and the execution. Trent Alexander-Arnold passed to Salah more than any other player, finding the Egyptian 13 times.

He assisted his goal with a great cross, and the top-scorer should also have scored from an earlier cross from the right back.

The link-up meant Liverpool’s play was heavily focused down the right side, which gave Andy Robertson a break, especially as much of Mane’s work was done in the centre, as mentioned above.

The image below, from WhoScored, shows Liverpool’s right wing preference.

There have been games this season where a lot of focus has been down the left, which has seen the Scottish full back emerge as one of the best left-backs in the league.

But here Trent had his day, and his latest in a string of good performances saw him touch the ball over 100 times, make four key passes, three interceptions, two passes, and two blocks.

The passing network below, from WyScout, shows that the centre backs often worked the ball to Trent, with the thicker lines indicting the more preferred passing routes.

Salah’s goal in this game saw him reach the magical 30-goal milestone in the league, and 40 in all competitions making him the first Liverpool player to do so since Ian Rush in the 1986/87 season.

The breakdown of his league goals reads: 23 with his left foot, five with his right, and two headers, the second of which came in this game against Bournemouth as he used his noggin to loop Trent’s cross over Asmir Begovic.

Only three of Salah’s goals have come from outside the area, and only that wonder goal against Man City from near the centre circle can be considered a strike from distance.

However, not all of his strikes are from the right wing position he operates in. 11 have come from areas to the right of the penalty spot, and his range of scoring positions show that he’s a well rounded penalty box poacher.

The graphic from Squawka, below, shows this.

In the game against Bournemouth, 95 percent of Liverpool’s shots came through the middle, and Salah’s header was no different even though the cross itself came from the right.

Though he goes down on the team-sheets as a right winger, he continues to show that he’s more than just a wide-man.

When the team switched to 4-4-2 later in the game, Salah moved into what would be considered a more orthodox position for a striker, but in truth it’s not too different to the position he regularly takes up when Liverpool have the ball.