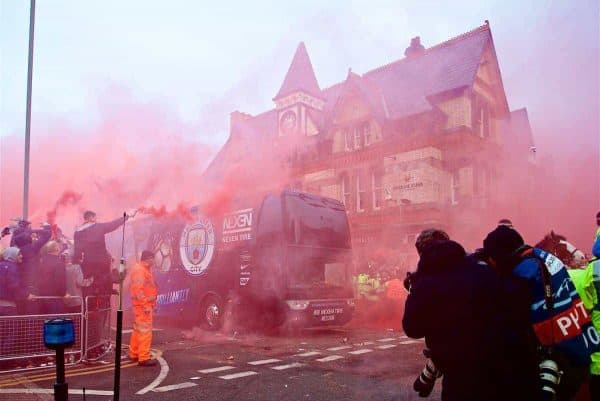 Merseyside Police issue warning ahead of Liverpool vs. Roma at Anfield

Merseyside Police have vowed to crack down on any fan disturbances around Liverpool’s Champions League semi-final against Roma, following the ugly scenes which marred Man City‘s arrival at Anfield in the previous round.

City’s coach was badly damaged by objects thrown by supporters in the street when the sides met earlier this month—actions which led to a UEFA charge and strong condemnation from Reds boss Jurgen Klopp.

Local police are on alert for any untoward behaviour ahead of Tuesday’s last-four clash, promising a “firm, fair and friendly” approach which they hope will keep football in the headlines.

“We are expecting a vibrant atmosphere at Tuesday’s match, but our intention is that at the end of the day we will be talking about the game and what happened on the pitch as opposed to off the pitch.

“As always, my officers will be dealing with the fans, as they would expect to be treated themselves.

“Our policing style will be firm, fair and friendly, but we will take action where necessary, against those individuals who may seek to cause problems or misbehave and spoil the evening for the majority of supporters.

“We know that this will be a busy operation and we hope that fans attending the match will act as ambassadors for their clubs and enjoy what I am sure will be a good game.

“Both sets of supporters will be delighted that their teams have reached the semis and that is an achievement worth celebrating for both clubs.”

Liverpool City Council has provided mobile CCTV to assist the effort, while specially trained dogs will be on hand to detect pyrotechnics such as fireworks and flares.

“While recognising that some supporters feel they can add to the atmosphere of the occasion, the use of flares and other pyrotechnics at and around football matches is a concern.

“We fully support the club in working to eradicate this dangerous and reckless practice and would ask that supporters work with us.

“The police and courts take these offences very seriously and prosecution can result in a prison sentence. I would remind people that this can apply not only within the stadium, but also in the surrounding streets and when attempting to enter the ground.

“Merseyside Police is committed to ensuring that everyone involved and attending the game has a safe and enjoyable experience and we will not tolerate any criminal, or anti-social behaviour.”