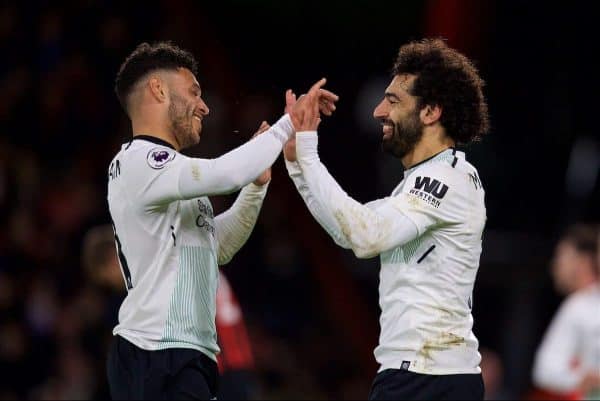 Liverpool take on Bournemouth as they return to Premier League action at Anfield on Saturday. Here are all the stats and facts ahead of kickoff.

This will be the 13th meeting of the teams in league and cup, with the Reds winning eight, drawing twice and losing once. In those games the Reds have scored 27 times and conceded 11.

At Anfield the teams have met five times in league and cup, with the home side winning four with one draw.

Liverpool will be looking to record a second league double over Eddie Howe’s men in three seasons, having done so in 2015/16.

The Reds have failed to score only once in the 12 previous meetings—in a goalless FA Cup tie in January 1968.

If Mohamed Salah scores today he will have found the net for the seventh successive home league match.

Salah has found the net 29 times for Liverpool in the league in 31 appearances. The record of reaching 30 league goals in fewest games for the club belongs to George Allan who did so in 31 games in 1896.

Liverpool’s last three games on this day have produced a total of 18 goals with the Reds winning twice and drawing the other.

They have not played a league fixture on this day since 2007 when they drew 0-0 at Man City.

Should Sadio Mane score once more in the top flight this season it will be only the third time since 1990/91 that their top three league scorers have all reached double figures in a single campaign—and the first since 2013/14.

Liverpool’s front three (Mane, Firmino, Salah) have scored 79 goals this season between them. This is a club record by their three top scorers in a campaign.

Against Watford two weeks ago Bournemouth set a club record by scoring in a 13th successive top-flight game (it is now 14).

They last failed to score in the league on December 23 at City.

But no opposition team has scored against Liverpool after the 24th minute in any of the last eight fixtures.

A goal has been scored in the 89th minute or later in each of Bournemouth‘s last seven league games, with five of those goals affecting the result.

The Cherries have scored as late as that in each of their last three matches to earn four points.

Jermain Defoe has scored 15 goals in the 90th minute or later in the Premier League—more than any other player in that era.

He has scored 162 top-flight goals, one behind Robbie Fowler.

Defoe is Bournemouth‘s joint-leading scorer in away league games this season with three, the same total as Josh King and Junior Stanislas.

Adam Lallana has scored against Bournemouth in his career—doing so for Southampton in the League Cup seven years ago.

He is a former Bournemouth loanee having played four times in the 2007/08 season.

Danny Ings began his career with Bournemouth, scoring eight times in 30 games before transferring to Burnley early in the 2011/12 season.

Jordon Ibe made 58 appearances for Liverpool during his time with the club. His debut came in the last game of the 2012/13 season and his last game in the final match of the Premier League campaign three years later.

Brad Smith was at Anfield as a youngster from 2010 to 2016, playing 11 times in total. He will hope to take part in this summer’s World Cup with Australia.

Today’s man in the middle Chris Kavanagh will take charge of Liverpool for the first time. He has never refereed a Bournemouth fixture either.