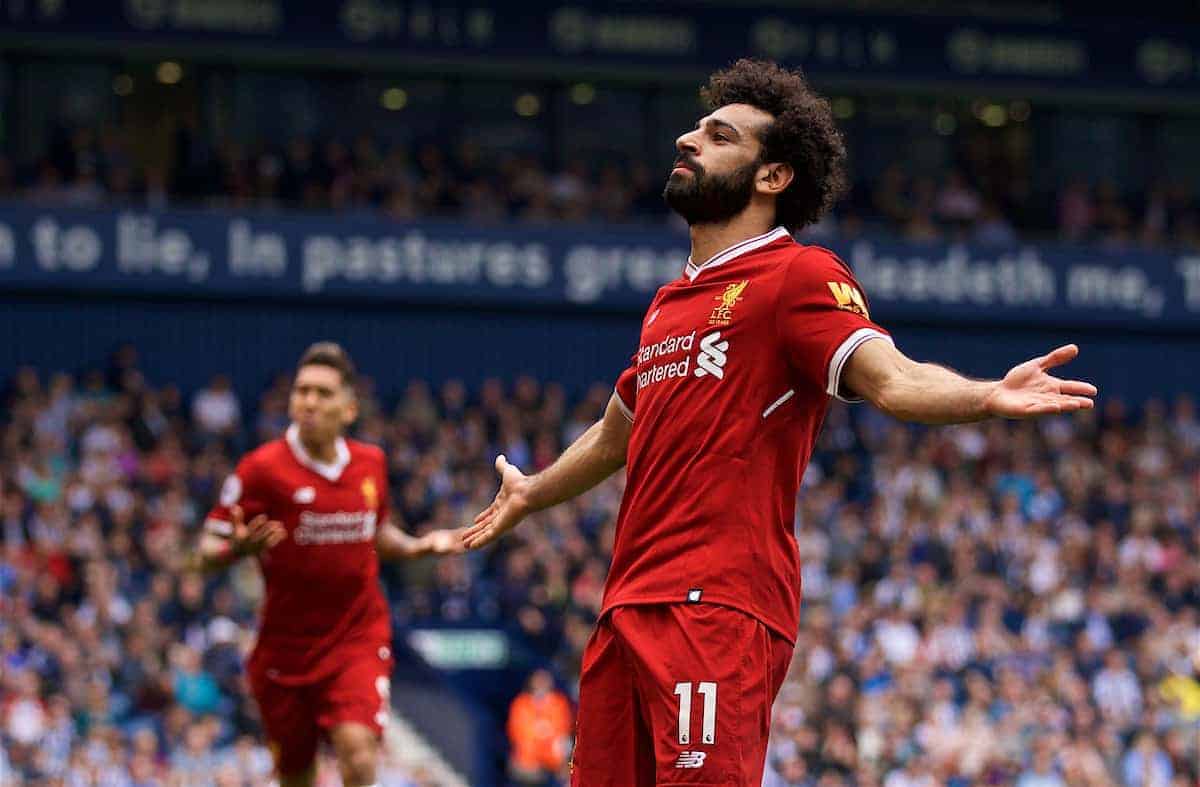 Liverpool welcome Stoke City to Anfield on Saturday lunchtime, looking for a big win in their quest to finish in the top four.

After another breathless midweek of Champions League action, focus is required this weekend.

The Reds were magical in their 5-2 win over Roma in the semi-final first leg, but any momentum that was lost by the Giallorossi‘s two late goals must not affect them.

Stoke head to Merseyside on the verge of relegation to the Championship, but they will put up a fight and test what could be a weakened Liverpool side’s resolve.

All of a sudden, things have become slightly nervy in the top-four battle, with Chelsea finding form and narrowing the gap to eight points with a game in hand.

Jurgen Klopp‘s team cannot afford many slip-ups in their remaining three league games, and victory against Stoke is paramount, in what is their easiest remaining fixture.

The 2-2 draw at West Brom last weekend was deeply frustrating, but it is time for Liverpool to put any lingering doubts about playing Champions League football next season to bed.

Klopp has big decisions to make with his personnel, ahead of next Wednesday’s second leg in Rome, but as cliched as it may be, the manager needs to take it one match at a time.

Dropped points against the Potters could spell trouble ahead of a trip to Chelsea next weekend – do a ruthlessly efficient job please, Reds.

One of the biggest negatives against Roma was the knee injury suffered by Alex Oxlade-Chamberlain, whose season looks over.

It leaves Klopp with just three fit senior midfielders – Jordan Henderson, James Milner and Gini Wijnaldum – so he has to use them very carefully.

Joel Matip, Emre Can and Adam Lallana are all still out, and whether any of them feature again in 2017/18 remains to be seen.

Sadio Mane is likely to be absent on Saturday with a thigh problem, although Klopp hasn’t confirmed it. The 26-year-old should be fit for Wednesday.

Nathaniel Clyne is an option start on Saturday, with Trent Alexander-Arnold a potential choice in central midfield, having played there before.

Ragnar Klavan and Alberto Moreno are available at centre-back and left-back respectively, should Klopp want to wrap Virgil van Dijk and Andrew Robertson in cotton wool.

How many of the first-choice midfielders start remains to be seen, but Ben Woodburn and Curtis Jones are candidates to come in and prove their worth.

Lee Grant is Stoke’s only absentee, which means Paul Lambert may go with the same starting lineup that drew 1-1 at home to Burnley last Saturday.

Ibrahim Afellay has been told to stay away from the club, having fallen out with his manager.

Last 5 at home to Stoke City (All Competitions) If Salah scores this weekend, he will move one clear of Luis Suarez, Cristiano Ronaldo and Alan Shearer (31) to become the Premier League‘s highest ever goalscorer in a single 38-game season.

He would also edge closer to Ian Rush’s tally of 47 goals in 1983/84 – the most scored in a campaign by a Liverpool player – having notched an unfathomable 43 to date.

Speaking at Melwood on Friday morning, Klopp emphasised the importance of Saturday’s game, and said his starting lineup will be as strong as possible:

“I prefer to wait until the last second, until I have to make the decisions,” Klopp said.

“We play Tuesday, Saturday and Wednesday, which is OK from a recovery point of view.

“So we could play the same team, if players are available. It will not be a thousand changes, because we don’t have that opportunity. And it’s an important Premier League game.

The match kicks off at 12:30pm (BST) on Saturday, allowing Klopp and his players the maximum possible time to prepare for Wednesday’s second leg in Roma.

Television coverage gets underway on Sky Sports Main Event at 11:30am.

Chris Williams is running our matchday live blog from 11:45am, with lots of interesting content before the game, and minute-by-minute updates during it.