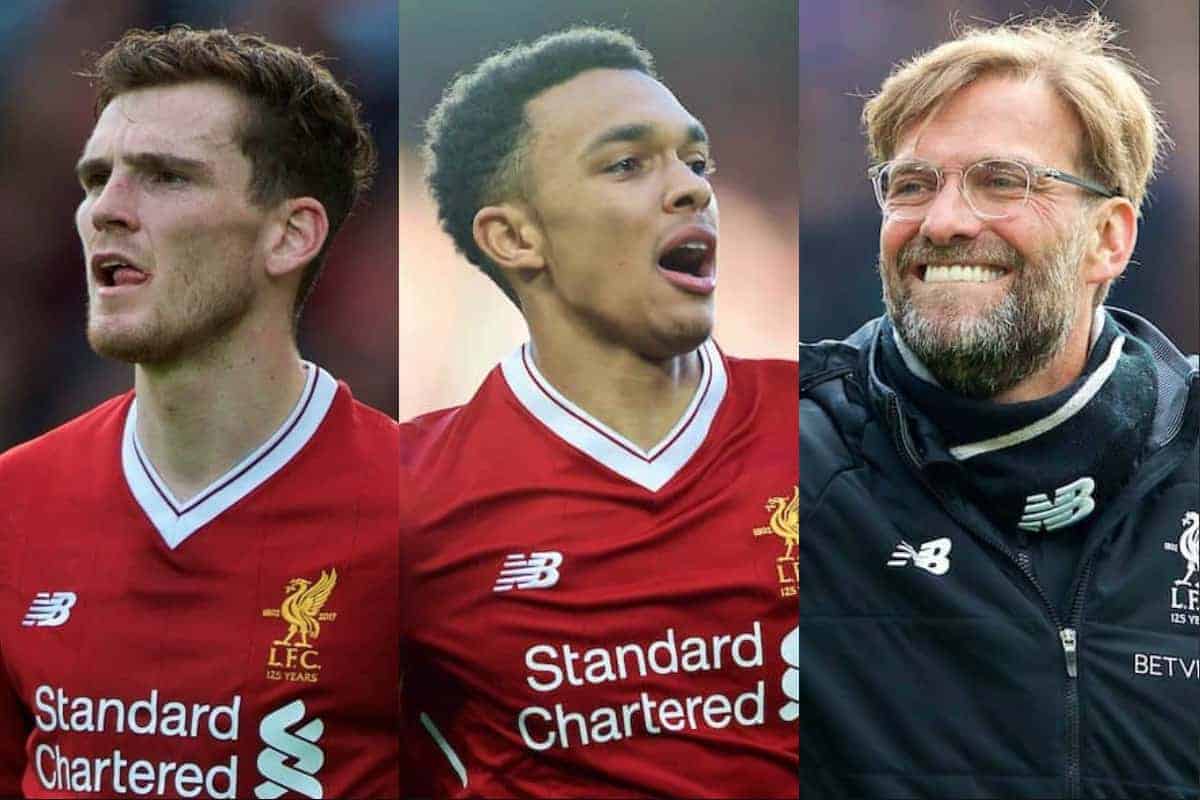 We round up the latest Liverpool FC news and rumours on Tuesday, with another transfer link quickly quashed and two full-backs speaking well.

Left-back Andrew Robertson has been speaking about how he expects the match to pan out, with intensity very much the order of the day.

“It might come down to one mistake or whatever and we just hope it’s not us.

“Our concentration levels have to be 100 percent and hopefully if we can put in a similar performance and get the better of them and take our chances like we did at crucial moments, then hopefully we can have a win going into the Etihad because it’s always better to have something to protect.”

Robertson is sure to play a key role on Wednesday evening, and he could again be tasked with thwarting former Liverpool man Raheem Sterling.

The Scot had the beating of his opponent when the Reds won 4-3 back in January, and it will be one of the key battles at Anfield, should Sterling start.

Trent on Being a Role Model Trent Alexander-Arnold has enjoyed a meteoric rise at Liverpool, going from academy starlet to first-team member in no time.

The 19-year-old is a hugely likeable individual, and despite his tender years he is already acting as a role model to others.

Speaking to The Anfield Wrap, the prodigiously gifted right-back spoke about inspiring young children, and using his own heroes as inspiration.

“It’s a proud thing to hear, and to know that people want to use me as motivation to reach their goals and ambitions, just like I did with the likes of Gerrard and Carragher,” he said.

“I’d look at them and every single day would think I want to be like them.

“When I’d go to Anfield I wouldn’t really watch anyone else, I’d be staring at those two, thinking they’ve played on the streets of Liverpool, so why can’t I do that as well?

“Being able to see someone in the first team who’s come up in the same way you have, knowing that anything is possible, gives you that bit more motivation.

“Knowing they would go and visit people and make peoples’ day—just getting to that level where you can change someones life always gave me that motivation to give back to the community.

“People look up to footballers a lot, especially in and around Liverpool, and knowing I could make a kid happy is a special feeling.”

What an impressive young man he is.

With just two months until the transfer window opens, Liverpool’s plans for the summer are beginning to take shape.

But as quickly as speculation mounted, the Liga side doused the story in cold water, with Torres signing a new contract on Tuesday afternoon.

This extends Torres’ previous deal by a further year to 2021, as well as increasing his release clause to an eye-watering €100 million.

It is safe to say Liverpool are unlikely to shell out such a significant fee for an 18-year-old who has played just nine times at senior level.

Another transfer link to emerge is a possible move for Italian youngster Nicolo Barella, currently plying his trade with Cagliari.

The 21-year-old midfielder has shone in Serie A this season, attracting the attention of Inter Milan, and he has been pencilled in as a future Italy international.

La Nuova Sardegna claim that Liverpool are considering a bid for Barella, even though Inter remain favourites for his signature.

With Naby Keita already on his way to Anfield this summer, Liverpool’s midfield will be strengthened significantly, but other reinforcements are still required.

Emre Can‘s future remains up in the air, fitness issues surround Jordan Henderson and Adam Lallana and James Milner turns 33 at the beginning of next year.

Fresh blood is required, and Barella represents an exciting option, having chipped in with five goals in 26 league appearances in 2017/18.