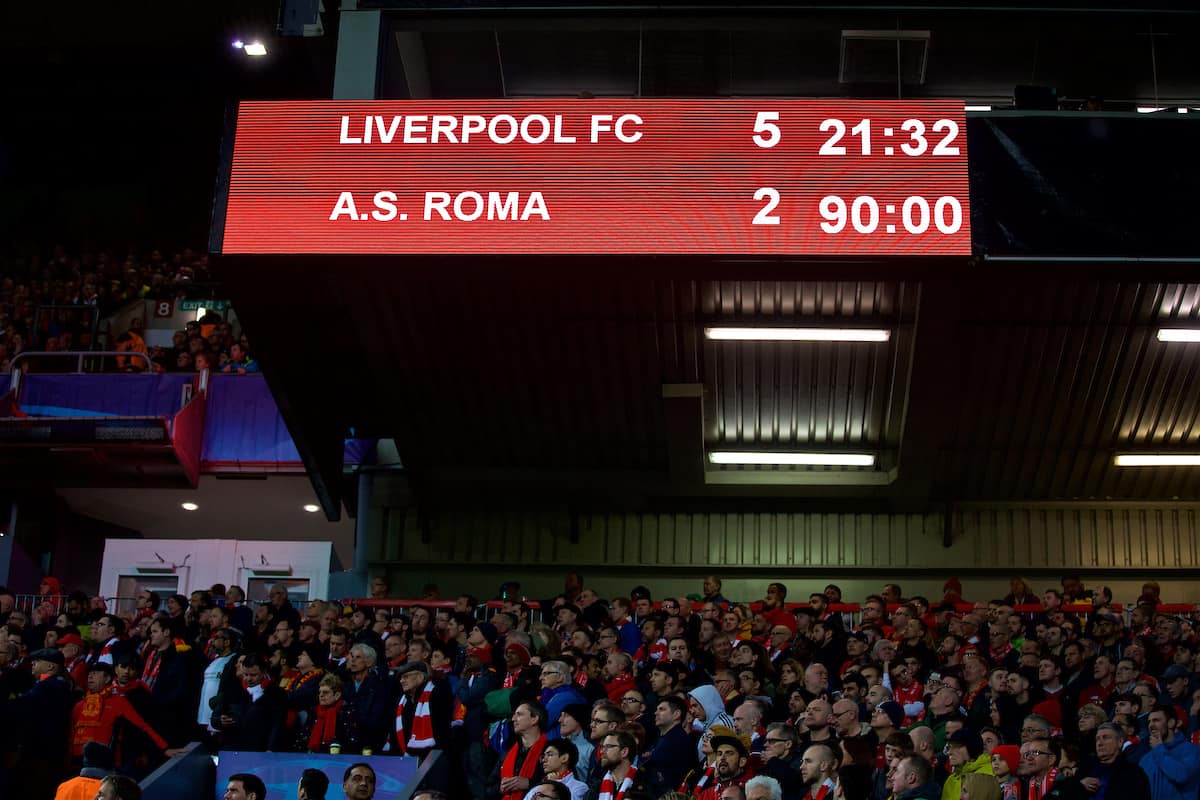 Liverpool thrashed Roma 5-2 in a frankly ridiculous Champions League semi-final clash on Tuesday, and supporters were left stunned by the game.

The Reds met the Italian giants at Anfield, in front of one of the great atmospheres created at the ground.

In an unbelievable attacking performance by Jurgen Klopp‘s side, Mohamed Salah and Roberto Firmino both scored twice, and Sadio Mane also found the net.

There was frustration late on, though, as goals from Edin Dzeko and Diego Perotti gave Rome some hope going into the second leg at Stadio Olimpico.

Fans were left running out of superlatives for Salah, who took his tally to 43 goals this season and has staked a claim for being the most in-form player in the world…

Most goals for @LFC in a single season:

Rushing back to catch highlights, two goals and two assists. My god Mo Salah! Surely if Liverpool win CL, he should be up for Ballon D’Or. What a performance on a big European night. Breathtaking

Liverpool 5, Roma 2. Stunning start of the match with 2 goals and 2 assists from @mosalah. Going into the second leg in Rome next week ahead… #lfc pic.twitter.com/JWpqNflBPG

It's official guys, Mo Salah is an embodiment of Ronaldo and Messi. He assists (Messi) He scores (Ronaldo)

Are you not entertained, Roma!?

Mo Salah leads Liverpool to a 5-2 victory in the 1st leg of the semis! pic.twitter.com/NvK5tUDzoN

If Mohamed Salah keeps this up he’s playing himself into Ballon d’Or contention.

An exhibition of attacking football was lauded by the masses, and confidence remained high ahead of the return fixture despite Roma’s late goals…

Big job to do in Rome, but we've been there and done it before. Magnificent Reds, at times unplayable and devastating – I love you #LFC

I can’t wait to get to Rome now. Roll on next week. We’re scoring.

An amazing night. Sloppy to concede those two goals, but a 5-2 win is an unbelievable effort.

If Liverpool balls that lead up in Rome they don't deserve to go through.

When have a Liverpool team ever been 5-2 up in a European Cup semi final first leg? Forget when those goals came, you'd have taken that!

One goal in rome…

Ironically, Roma coming back against Barca in the last round can be used by both sides to help them through the 2nd leg. They will use it as motivation, we will use it as a warning.

I am not too concerned for the away game. True Roma done it to Barcelona, but hey we are no Barcelona we are Liverpool. YNWA.

If you were all asked “would you be happy with a 3 goal lead going to Rome?” you’d have said yes. No need for panic. We’re in control of the tie now.

A blistering performance by Liverpool to go 5-0 up – with Mo Salah 'next level,' and two Roma goals to threaten a repeat of their 3-0 win over Barcelona. But anyone think Liverpool won't score in Rome? Kiev looks on.

That was an annoying ending to an otherwise phenomenal performance. So. Let's mostly focus on the phenomenal part of it. Kiev is in sight.

Would have taken 1-0 ahead of the game but to win 5-2! Absolute madness that. Onto the 2nd leg now #LFC #ChampionsLeague

In short, Liverpool should be fine. But the nerves will certainly be jangling next Wednesday now.

No chance they stop us scoring over there. Absolute no chance. Unforgivable to concede like that at the end, just gives it a sour taste but still super confident we can finish this off.

There was also praise for players other than Salah, with the majestic Firmino one of those to receive heaps of adoration…

Handball aside (not seen the replay), thought James Milner gave one of the most complete central midfield performance by an LFC player since Steven Gerrard's prime. Can't give more praise than that.

This club has had a lot of great European performances. I've seen many of them and this one was right up there. Salah and Firmino absolutely majestic. #lfc

Salah will get all of the plaudits tonight, and rightly so. But Firmino really deserves huge praise too. 2 goals and 2 assists in a CL semi-final. 44 goal contributions in all competitions this season now, plus he allows the likes of Salah/Mané to thrive aswell. So influential.

Crazy, crazy night. Liverpool will be disappointed with the last 10 minutes, but how can you complain with a 5-2 win in a CL semi final? They'll score in Italy, surely. Salah next level brilliant tonight, Firmino not far behind. TAA, Wijnaldum, Henderson, Milner excellent.

Whatever you do tonight, appreciate Roberto Firmino.

Salah in a world of his own, but there’s a fella selflessly helping him.