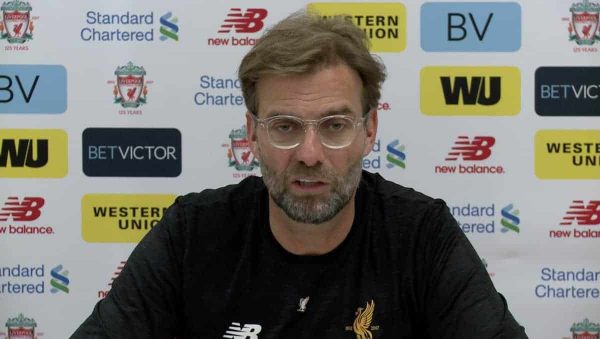 The Reds welcome the Potters to Anfield on Saturday lunchtime, knowing that three points will put them to within touching distance of a top-four finish.

Klopp was at Melwood to discuss that game and more, and he remained coy about any potential injuries, and who he would opt for in his starting lineup.

“I prefer to wait until the last second, until I have to make the decisions,” Klopp told reporters.

The 50-year-old also sent a touching message to Sean Cox and his family, following the horrific unprovoked attack on him by Roma fans on Tuesday.

It has left the 53-year-old fighting for life, and Klopp sent his best wishes, as well as revealing how he felt when he heard the news.

“The game on Tuesday showed the beauty of the game, but what happened before was the ugly face,” he said.

“When I heard, I can’t describe my emotions. It should never happen. It’s unbelievable.

“All our thoughts and prayers are with Sean Cox and his family.”

Saturday’s visit of Stoke is a very important game in its own right, and attention must not be on Wedensday’s second leg in Rome.

Failure to beat Paul Lambert’s side would further give Chelsea hope that they can catch the Reds, with the Blues travelling to Swansea City later in the day.

With Joel Matip, Emre Can, Adam Lallana and Alex Oxlade-Chamberlain all out – Sadio Mane also looks likely to be absent – numbers are light at the moment.

Resting key players ahead of Wednesday would be an undoubted risk, but one Klopp will surely be considering, given the current workload on his players.