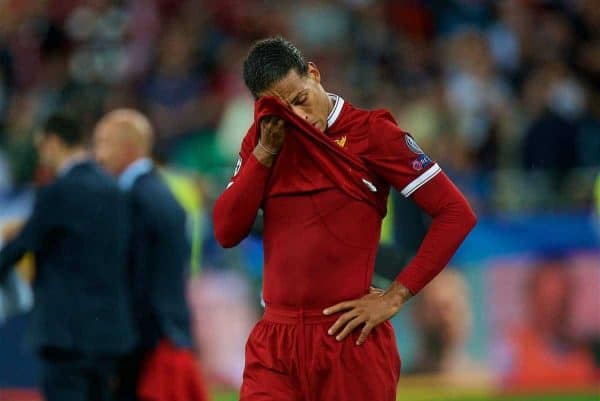 Liverpool players have reacted to the Champions League final loss in Kyiv, insisting that despite the pain they’ll bounce back soon.

The Reds started strongly and looked every part a team capable of landing a sixth European Cup, but injury to Mohamed Salah saw the attacking power of the team stutter.

Two mistakes from Loris Karius handed an ultimately unassailable lead to Real Madrid, who also saw sub Gareth Bale score one of the all-time great individual goals in a final.

After the match the Reds were understandably despondent and emotional, but have reassured fans that they will look to return as a force.

Hearteningly, the players were also keen to stand together and not single out goalkeeper Karius as taking the blame for the loss.

Captain Jordan Henderson was first to speak, interviewed by BT Sport on the pitch after the final whistle.

It’s disappointing of course. I thought we did well to get the goal and get back in the game but [we made] mistakes and Madrid were really good.

We knew they were a fantastic side and always going to hurt you. And they deserved to win, they were obviously the better team on the night. But I felt, especially in the first half and the first 30 to 35 minutes, that we dominated with the ball. We had a couple of chances.

When Mo got injured they started dominating a little bit more with the ball. We did well to get in at half-time at 0-0.

We’ve got to be proud to get here. We got beat by a fantastic team. We have got a fantastic team and hopefully we can keep going in the Premier League, the Champions League and the cups as well.

Both central defenders, Dejan Lovren and Virgil van Dijk, were excellent on the night. The duo spoke to BBC Sport post-game and admitted watching Mohamed Salah leave the pitch early was extremely tough to take.

“I couldn’t see the challenge I just saw Mo at the end.

“He was struggling, when I saw his face I knew straight away that something was wrong.

“He tried to continue but it wasn’t possible. I just hope it’s nothing too serious.”

Van Dijk echoed the thoughts of his defensive partner, noting that the team had rallied without him but that such quality is always tough to go without.

“Everyone knows how important Mo is to the team, to Liverpool, but I think we have plenty of quality to fill his boots.

“I think you could see it after, we scored the 1-1, we pressed them and had our opportunities as well—but in the end, a player as Mo, you’re going to miss him.”

Lovren also spoke with LiverpoolFC.com, stating his pride at the team and the fans involved in the journey.

“We deserved more than this tonight. But at the end we should be proud of the long road that we did. From the game against Hoffenheim to reach the final. To beat the best teams.

“We gave everything today for the lads who couldn’t play today. The lads who were on crutches, the lads who travelled along way to support us.

“But it just didn’t go our way and I’m sorry for them.

“Hopefully [Salah] will come back quickly and hopefully he can [play in] the World Cup for his national team. It’s just unlucky.”

Midfielder Gini Wijnaldum was sure that Mohamed Salah‘s early departure contributed to the Reds’ inability to create chances.

Liverpool were looking strong and dangerous early on, but failed to register a shot for the remainder of the first half after Salah’s substitution.

“I think when he was on the pitch we did it well for 25 minutes but [after the injury] there was less than before.

“Those things happen and we had to deal with it but it was difficult.”

Andy Robertson was largly excellent at left-back, but captured the mood of the squad and the fans with his “devastated” post on Instagram—but vowing to come back stronger.

Devastated after last night, it wasn’t meant to be! We have been on an incredible journey but ultimately ended in disappointment! Thank you for your amazing support this campaign, we will be back stronger next season!! #YNWA #allezallezallez ??

The Real Madrid captain caused Salah’s game-ending injury, dragging him to the ground and landing on the Egyptian winger’s arm.

“Prompt recovery, Salah. The future awaits you,” he wrote.

Whether or not Liverpool fans will be particularly forgiving to the implied accidental nature of the collision is debatable.