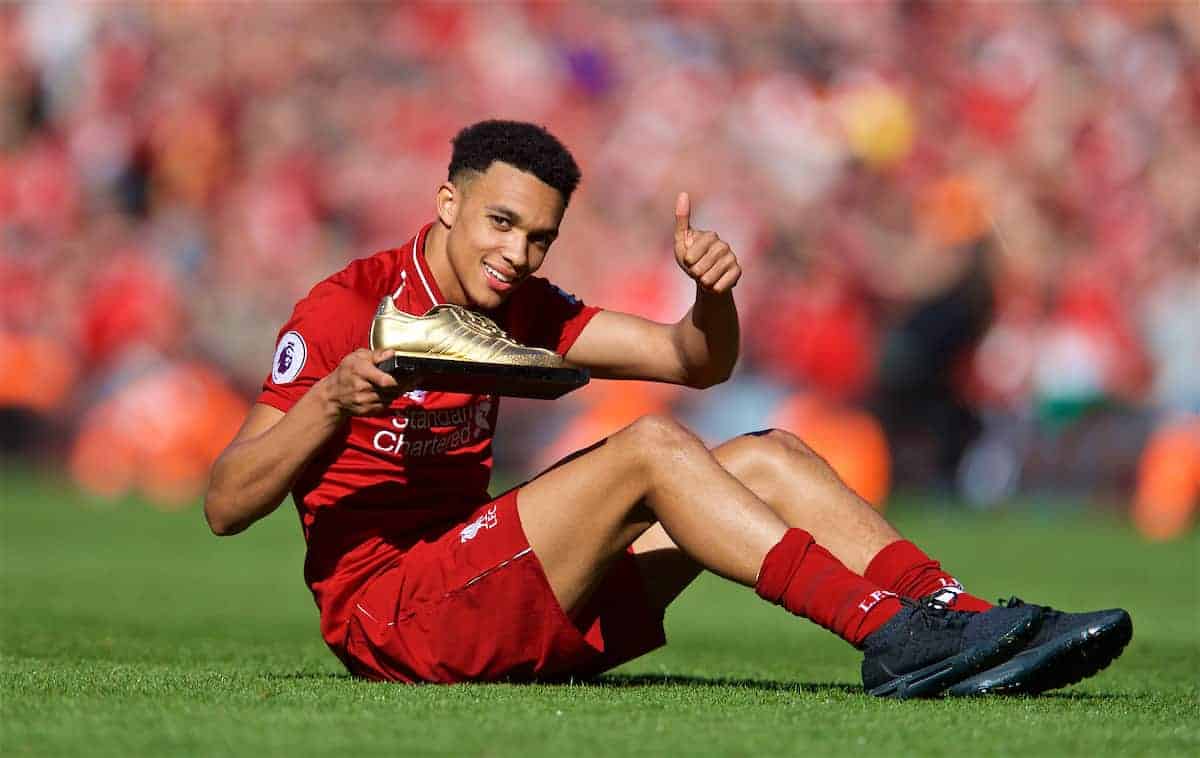 Liverpool achieved their pre-season goal of finishing in the top four, and the players have been in a positive mood on social media.

The Reds required just a point at home to Brighton on Sunday to book their place in next season’s Champions League, but they put on a show at Anfield.

Jurgen Klopp‘s side eased to a 4-0 victory – they could have scored more – with Mohamed Salah opening the scoring, Dejan Lovren heading home a second, and Dominic Solanke and Andy Robertson both scoring their first Liverpool goals.

It was the perfect preparation for the Champions League final against Real Madrid on May 26, capping off an excellent domestic campaign.

The players cut a delighted bunch during the lap of honour after the game, and they have been sharing their thoughts on social media.

Salah became the first-ever player to score 32 goals in a 38-game Premier League season, and he was awarded his multiple Player of the Year awards on the pitch, including the Golden Samba, awarded by the fans.

Simon Mignolet was full of praise for his award-winning teammate.

Cause we’ve got Salah! Congrats with the record for most goals in a Premier League 38-game season, Mo! ???? #LFC

Captain Jordan Henderson sent a message of thanks to the supporters, as he stands a couple of weeks away from potentially lifting the Champions League trophy aloft.

Great way to finish off the premier league season at Anfield! Thank you for all your support throughout the season. See you in Kiev…. ???? #YNWA

James Milner, ruled out through injury, captured some great footage of the Kop during the lap of honour.

Lovren was pleased to net his maiden home league goal for Liverpool, and poked fun at Robertson after his slightly deflected strike.

? Well done team today, really happy for @domsolanke and @andyrobertson94 (still thinking its a own goal) ? Special congratulations goes to @mosalah well done brate for this season ?? #goldenboot is well deserved yours!!!! ? Big Thank You to the supporters hope you are ready now for the final. Let’s do this together till the end! #ynwa

Robertson seemed to ignore Lovren’s joke, instead focusing on his special personal milestone.

Brilliant performance by the lads today to secure top 4! Delighted to get my first goal for the club and buzzing for Big Dom! Thank you for your great support at Anfield this season. Next stop….. Kiev!!! #YNWA ?

Solanke needed just three words to sum up his thoughts, having found the net for the first time in a Reds shirt.

It has been an outstanding breakthrough campaign for Trent Alexander-Arnold, and he appreciated receiving the Golden Samba Young Player of the Year award, and paid tribute to his friend Louis, suffering from cerebral palsy.

Great way to end the season! Grateful for another special award. All focus towards Kiev now??#66 #YNWA

Adam Lallana made his first appearance since March, and the 30-year-old appeared understandably delighted to be back in the fold.

What a brilliant day to top a fantastic season for the boys. Supporters out of this world. And the best part of it… the big one still to come ? Allez Allez Allez

Danny Ings was another who made a cameo against the Seagulls, as his league season ended with him fully fit for the first time at Liverpool.

Great performance from the boys ! Thanks for your support ? #YNWA

Danny Ward may have played his last game for the club, and he tweeted a nice photo of himself and Liverpool’s three other goalkeepers (how is Adam Bogdan still there?) on the hallowed Anfield turf.