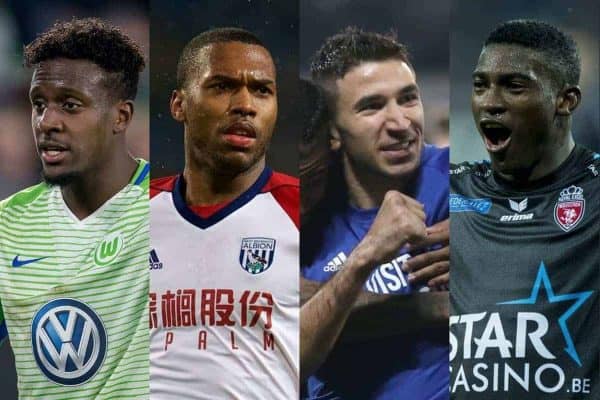 Assessing the futures of Liverpool FC’s 17 loanees – Who can return to an Anfield role?

We take a look at the futures of Liverpool FC’s 17 loaned players and assess whether any can make it into Jurgen Klopp’s first-team squad for next season.

The loanees will all have left Anfield with the aim of impressing at their temporary clubs to force a way into Klopp’s plans for the 2018/19 campaign.

Here we take a look at who may have succeeded in that and what the future may hold for those who didn’t.

It was hoped joining West Brom for six months would revive Sturridge – giving him regular football, hopefully some goals and a chance to earn a World Cup place.

But sadly it proved another frustrating chapter as injuries typically de-railed the striker who played just six times and failed to find form or the net.

That Klopp allowed Sturridge to depart said everything about his future – namely that he doesn’t have one. A permanent exit this summer looks certain.

The forgotten Serbian joined Anderlecht in January in a move that started badly but developed into a relatively successful spell.

After finding fitness Markovic has shown flashes of his quality in eight outings so far, with his bright form – including one goal and assist – impressing the club sufficiently to want to sign him permanently.

The writing has been on the wall for some time for Markovic, and it’s just a case of securing a permanent move this summer after three seasons of loan spells.

If the aim was for the Belgian to begin fulfilling his potential with a fruitful season of regular game time and goals it sadly didn’t go to plan at Wolfsburg.

Origi enjoyed consistent action but failed to impress – not helped by playing under three different managers – leading to public criticism from the club’s sporting director.

Origi suffered a confidence crisis as the Wolves had a poor season ending in a relegation play-off, and despite better recent form with two goals in the last two, he only scored seven in 35 outings.

The Belgian’s future is a tricky one to clarify given his previous success and potential.

But his form will have done little to persuade Klopp he’s ready to make an impact at Anfield and could have ended hope of Origi ever truly making at Liverpool.

It’s fair to say it was a successful first loan spell in England for Grujic who played a key role in Cardiff’s promotion to the Premier League.

Immediately after arriving the Serbian inspired a 12-game unbeaten run which proved crucial to getting the Bluebirds into the top-flight.

Grujic gained vital first-team experience playing 14 games and scoring one goal, and crucially he showed the physical and technical attributes required to make the step up.

Grujic’s future role could yet depend on summer arrivals, but his form and progress should see him handed the chance to fight for a first-team place next season.

Flanagan’s time at Bolton was underwhelming, with the full-back making just eight appearances at the Macron Stadium.

Having failed to nail down a regular starting role, Flanagan’s spell will have done nothing to change Klopp’s mind that he has no first-team future at Anfield.

A permanent exit should materialise; he may need to be ready to drop down the divisions like another former Liverpool academy full-back, Stephen Darby, did previously.

After an eye-catching pre-season there were high hopes for Kent this season but he didn’t live up to expectations with poor spells at Freiburg and Bristol City.

Just six games for the Bundesliga side were followed by only 11 outings at the Championship club, where he started well with two assists before dropping out favour.

The successive flat spells present concerns over Kent’s development and readiness, which will not have helped his first-team prospects.

Verdict: A big pre-season ahead but another loan beckons

Given struggles to prove himself at those clubs it’s hard to see a place for Kent in Klopp’s squad – unless the youngster impresses sufficiently in pre-season.

The long-term contract signed in summer 2017 may keep him on Liverpool’s books, but another season away from Anfield beckons.

The Wales international was one of the main success stories of the loanees enjoying a magnificent six-month spell at Hull.

The 21-year-old really showed his talents with a fantastic spell which will no doubt have caught Klopp’s attention.

There have long been calls for Wilson to be brought into first-team reckoning and now is the ideal time.

Suffering relegation with Sunderland made for a tough first loan for Ejaria, but it would have been an educational spell nonetheless.

A couple of injuries and general chaos at the club prevented Ejaria finding top form, but he showed flashes of his talent in 11 outings and enjoyed a moment to remember with his first senior goal against Wolves.

Those moments probably were not displayed enough to convince Klopp he’s ready to feature regularly at Anfield just yet though.

Verdict: Potential for Anfield future but another loan is likely

It’s difficult to see a pathway into the first-team for Ejaria currently so another Championship loan seems wise – though it must come at a more suitable club.

Joining Fulham was already the third loan move of Ojo’s youthful career but it proved another frustrating spell.

After a positive start, Ojo saw progressively less action as season wore on – injuries didn’t help this – and he has been involved in only one of the last seven games.

He will hope to feature in Fulham’s upcoming play-off final at Wembley, but the rest of his spell won’t have convinced Klopp he’s ready.

Verdict: No immediate future and another loan to come

Since breaking through at Anfield in 2015/16 Ojo hasn’t pushed on to prove he can be part of Liverpool’s future.

And this is likely to see him spend another season away from Anfield in the second tier.

It was a magnificent campaign for the Nigerian who really rose to prominence as Liverpool’s stand-out loanee in a fantastic season at Royal Excel Mouscron.

This shouldn’t put any dampener on what was a great season for Awoniyi, who showed there is potential to work with – even if he may not be ready just yet.

Verdict: Potential for Anfield future but loan to one of Europe’s big leagues

A loan to a club in European competition is reportedly the plan for Awoniyi, who could also benefit from a move to one of Europe’s major leagues.

A second season in the Eredivisie was unquestionably a success for Chirivella who enjoyed a solid campaign at Willem II.

The Spaniard became a mainstay of a team which battled successfully to safety, playing 35 times, including in 30 of 34 league matches, and completing 29 full games.

Chirivella developed his game in areas needed – becoming a more combative, physical presence – and he certainly did all he can to stake his claim for a first-team role.

Verdict: Every chance of a permanent exit this summer

While clearly a talented midfielder it’s hard to see a place for Chirivella with the players ahead of him – and that’s before others arrive.

He will have boosted his reputation with another good season and a permanent departure potentially to a bigger Eredivisie club would be good.

Randall’s season at Hearts was one of the more strange loan spells.

After a poor start he forced his way into the team becoming a key player, before dropping back out of favour at the end of the season as he finished with 27 games and two assists.

The full-back deserves credit for transforming his fortunes after a tough opening – but it won’t have altered Klopp’s thinking over his lack of a first-team future.

And it seems ideal, allowing him to get another good season at a higher level under his belt before hopefully integrating him at Anfield.

Randall has no first-team future at Anfield and should move permanently to begin forging his senior career.

Allan’s spell in the Cyprian top-flight was extremely disappointing as he failed to command centre stage as expected at Apollon Limassol.

The Brazilian had only intermittent action throughout the season, appearing 20 times with 15 starts in all competitions, and no goals or assists made for an underwhelming spell.

The Brazilian still will not qualify for a work-permit which means another loan abroad next season beckons.

Klopp has been excited about Allan’s future but it risks never materialising if the right club isn’t found this time.

After signing in January the Colombian full-back went straight out on loan linking up with Real Mallorca’s B side.

Arroyo enjoyed an excellent six-month spell, helping his side win the regional Tercera Divison title and Klopp clearly sees potential in him.

A loan to a first-team environment would benefit, but getting Arroyo settled in at Anfield first and foremost would be useful.

The aim of a first loan spell for any youngster is gaining valuable first-team experience and Virtue achieved that with a positive spell at Notts County.

The youngster has given a good account of himself overall so far, helping his side reach the League Two play-offs with 15 appearances.

Virtue will hope the season ends in glory with victory at Wembley, and it would cap off a promising spell in which he has definitely showing signs of development.

Verdict: A loan to League One

Having tasted the first-team stage Virtue’s progression into senior football must continue. A step up to League One should be the next step.

A spell at League Two Yeovil Town wasn’t all plain sailing for Whelan back, but it provided a good educational first loan nonetheless.

Whelan produced some patches of good form in his 11 appearances which should provide confidence, while scoring his first professional goal will have been a dream come true.

Verdict: A loan to League One

Similarly to Virtue, it is crucial Whelan continues his career progression and a season-long loan to a club where he will play consistently in League Two or League One should be the aim.

Also departing Anfield in search of first-team experience, Firth achieved this in a tough but educational spell which at Chester City.

The academy ‘keeper equipped himself well in difficult circumstances as his side were relegated from the National League, eventually establishing himself as No.1 with 11 appearances and one clean sheet.

Verdict: A loan to a Football League club

A spell in non-league provided a valuable learning curve for Firth and the natural next step is to move higher with a Football League loan.

All 17 loanees will return to Anfield hoping to have done enough to have earned a place in Klopp’s first-team plans.

But – barring spectacular pre-season form from certain Reds – we make it just Grujic and Wilson who stand a genuine chance of returning permanently to Liverpool next season.