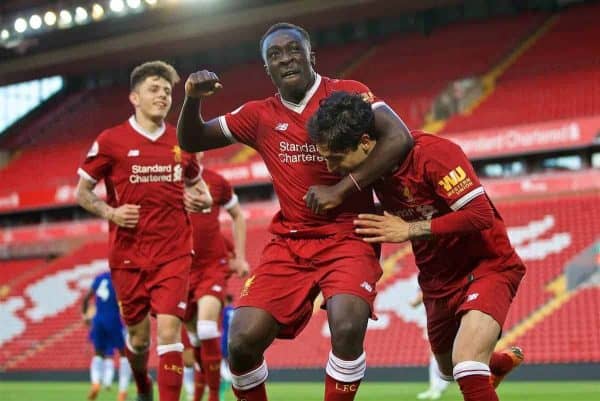 Liverpool U23s finish season in style with thrashing of Chelsea

Liverpool U23s cruised to a 5-1 win over Chelsea U23s at Anfield on Tuesday night, securing runners-up spot in Premier League 2 in the process.

The title has evaded the Reds this season, after Arsenal‘s recent victory over West Ham earned glory for the north Londoners.

Neil Critchley‘s side still had second in the table to play for, however, as Chelsea‘s youngsters made the trip north to Anfield. A win would see them leapfrog second-place Leicester City, who had already finished their season.

Critchley made six changes to the side that beat Everton 3-1 in the ‘mini-derby’ last month, on a lovely Merseyside evening.

Coyle made his first appearance since September, following long-term back issues.

The game got off to an entertaining start, with Adekanye’s pace and power causing Chelsea some early trouble down the right flank.

Nat Phillips made a crucial interception at the other end, as a rather sparse Anfield crowd was treated to an entertaining start.

Johnston opened the scoring for the Reds with 21 minutes on the clock, powering home from Adam Lewis’ delivery. It was no more than the Reds deserved.

Callum Hudson-Odoi had a wonderful chance to equalise almost straight away, but he shanked his effort wide in front of the Kop.

Kane showed some nice footwork before curling a fierce shot over the bar, and Juan Castillo volleyed wide at the back post for the visitors.

Liverpool’s lead was doubled shortly before half-time, as the impressive Adekanye cut back onto his weaker right foot and found the top corner.

Charlie Brown should have made it 2-1 immediately, but his shot went inches wide, as Critchley’s youngsters went in 2-0 up at the break.

A penalty was awarded to Liverpool early in the second half, even though Johnston scored before the referee’s whistle blew. It didn’t matter, though, as Dhanda produced a perfect spot-kick to make it 3-0.

Chelsea did pull a goal back before the hour mark, as Brown teed-up Martell Taylor-Crossdale to tap home and reduce the arrears.

Johnston, who could easily have scored a stoppage-time his aforementioned ‘goal’ had been awarded, headed into the net to register a well-deserved brace, ending the game as a contest.

Substitute Juanma’s superb stoppage time curler was the icing on the cake, rounding off an excellent team performance.

It has been a very good season on the whole, especially with key figures such as Harry Wilson and Ovie Ejaria out on loan, and Woodburn often not involved.