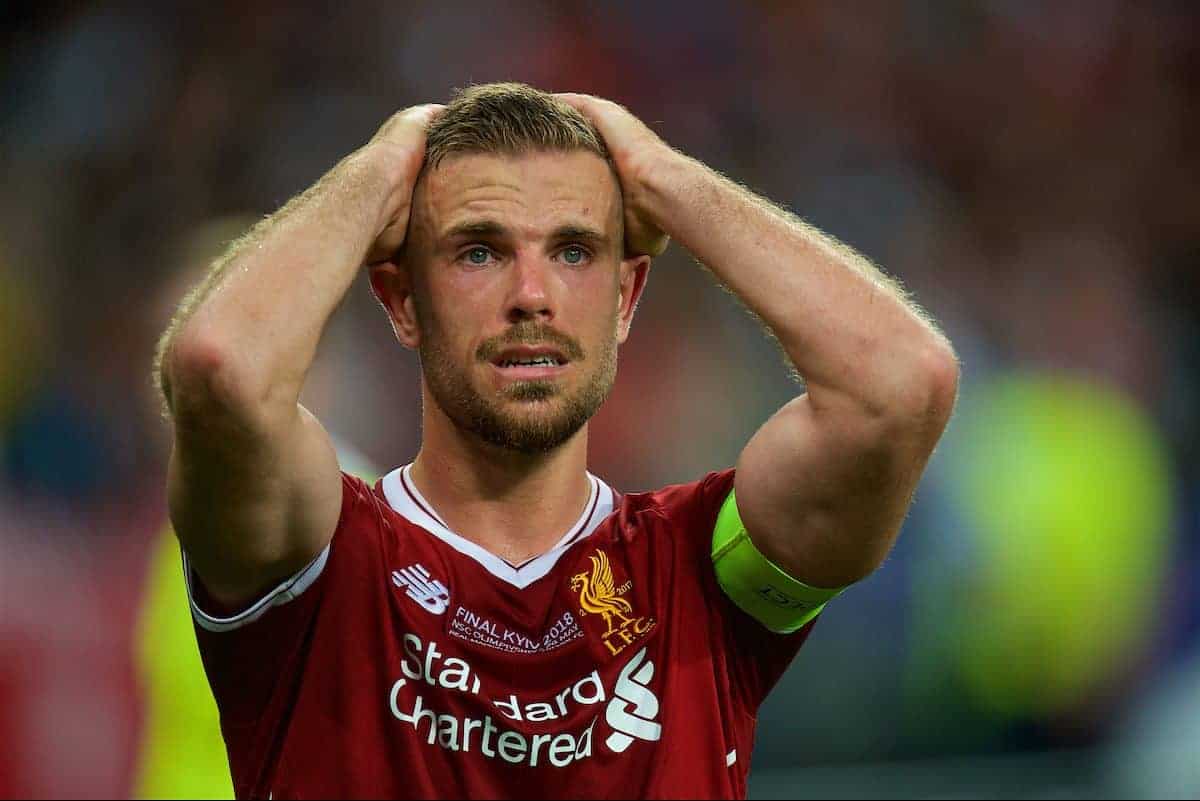 Liverpool fell to a heartbreaking 3-1 defeat to Real Madrid in the Champions League final, with a performance of wildly contrasting quality.

An absolute nightmare for the German, and it’s difficult to see how he comes back from this.

Inexplicably threw the ball into Karim Benzema’s knee to give Real the opening goal out of nowhere, before dropping Gareth Bale’s shot into the back of the net for the third goal which killed the contest.

Two horror mistakes on the very biggest occasion, and in the end it proved fatal.

Not a nice thing to see him in floods of tears at the end, and it was brave to confront the away fans and apologise for his errors.

Ultimately, though, you just can’t make mistakes like that at this level. Didn’t do a whole lot wrong, much like the rest of the back four.

Deal with the threat of Benzema and Cristiano Ronaldo fairly well in one-on-one situations and was not to blame for any of the goals conceded.

Made a powerful first-half strike which was well saved by Keylor Navas while Liverpool were well on top in the game.

Such a massive shame he couldn’t fulfil his dream of lifting the trophy for his boyhood club on this occasion.

A solid performance from the Croatian who was visibly devastated at full-time.

Won plenty of his battles and did the basics well. Difficult to fault him, or any of the back four, for any of the goals conceded.

A couple of excellent last-ditch interventions to deny Real certain goals and was strong in the air, as ever.

Probably should have done better with his chance from a corner which he directed over the bar in the first half.

Managed to keep Ronaldo relatively quiet for much of the evening. Full of energy and passion, as per usual. Several big, crunching tackles and a few lovely bursts forward, including a superb flick and dribble early on in the first half.

Wasn’t able to get forward and proving an attacking threat anywhere near as much in the second half, however.

Started well, full of aggression and on the front foot as Liverpool’s midfield closed Real down superbly and won the ball back numerous times in good areas.

Gradually faded as the game went on, and struggled to exert any real influence as Toni Kroos and Luka Modric seized control of the midfield battle and began to dictate the tempo of the game.

You can never fault his commitment to the cause and Milner was heavily involved as Liverpool made a bright start, springing forward quickly and linking up with the attack, while tracking back diligently and contributing in the defensive third when necessary.

Didn’t look particularly pleased to be replaced by Emre Can for the final 10 minutes. Started well along with the rest of the team and was involved in plenty of quick, short passes in the buildup to some slick attacking moves.

One of the few players who showed a willingness to drive forward on the ball and commit Real players later on in the game and you could not accuse him of going missing on this occasion, even things didn’t quite come off for him.

What can you say? Absolutely heartbreaking to see such a special player who has played such a prominent role in this remarkable Champions League run having to go off injured after just half an hour in the final after what appeared a deliberate and cynical action by Sergio Ramos.

Liverpool were by far the better side until that point, but their heads visibly dropped the moment Salah departed the field and in truth, they were never quite able to recover. Liverpool’s standout player on the night.

Real couldn’t live with his pace and directness at times in the first half, and following Salah’s injury it was Mane who looked like the most likely route back into the game.

Reacted quickest to stab home the equaliser in the second half and was incredibly unfortunate to see his 20-yard left-footed strike cannon back off the post shortly afterwards.

A disappointing evening for the Brazilian who really struggled to get into the game at any stage.

Had a decent close-range effort blocked in the first half and pressed well in the early staged, but faded badly thereafter and never looked quite like his usual, lively self.

Guilty of giving the ball away sloppily in dangerous areas on several occasions. Gave everything he had, but unsurprisingly didn’t look fully match fit and his lack of pace severely limited the overall function of Liverpool’s attack.

Unable to have much of a meaningful impact after coming on after half an hour.

Not able to affect the game late on in what was probably his final appearance for Liverpool before an expected summer move to Juventus.

Didn’t have many options in terms of changes once Salah was injured, but putting Lallana in the front three took a huge amount away from Liverpool’s attacking threat.

Again, his lack of quality depth on the bench meant it was almost impossible to affect the game with substitutes late on—meanwhile, Real were able to call upon Bale, who ended up winning the game.

Despite the agony of yet another cup final defeat, Klopp has well and truly brought Liverpool back to the very elite level of European football once more.