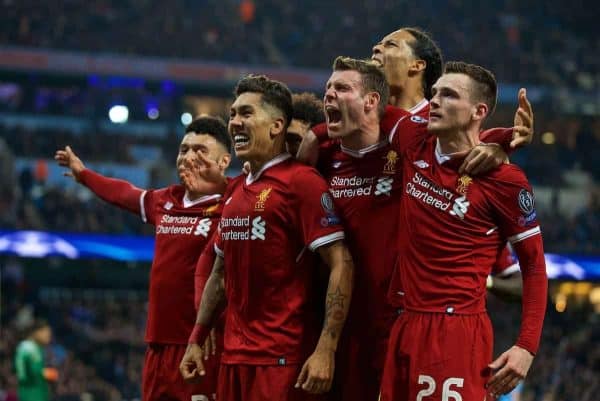 From Trent Alexander-Arnold through to Roberto Firmino it was a season to remember for Liverpool FC’s fans and players.

It was a devastating end to the Reds’ campaign, but what a ride it has been – and another enjoyable season of significant progress.

This is just the start under Klopp, and Liverpool’s future looks extremely bright, especially following the early addition of Fabinho.

Each Reds player enjoyed individual moments to treasure this season, but which ones stood out the most?

Here’s what we think.

Karius’ season ended in agony in Kyiv, but the strides the German made should not be forgotten, difficult though that may be.

His wonderful save to deny Everton‘s Yannick Bolasie was his standout stop of the campaign, as Liverpool drew 0-0 at Goodison Park.

Mignolet deservedly lost his place to Karius during the second half of the season, but saving a penalty from Hoffenheim’s Andrej Kramaric was crucial.

Without that moment, would Liverpool have even reached the Champions League group stage?

Nobody expected Alexander-Arnold to make such an impression in 2017/18, and he is now a shoo-in in Liverpool’s first-choice starting lineup.

The 19-year-old’s inch-perfect free-kick against Hoffenheim, on his Champions League debut, was the stuff dreams are made of.

It was a largely positive campaign for Gomez, despite injuries ending it prematurely, and he was first-choice right-back ahead of Alexander-Arnold early on.

In the 4-0 win over Arsenal at Anfield back in August, the 20-year-old was superb, and his precise cross led to Firmino heading home to open the scoring.

Lovren had an admirable end to the season, playing excellently in the Champions League run and silencing some of his many doubters.

He also scored his first-ever home goal for the Reds against Brighton on the final day of the Premier League, which he clearly enjoyed greatly.

A late winner at the Kop end, against Everton, on his debut. Enough said!

Matip was a frustrating figure in 2017/18, with inconsistency and injuries making him a rather unreliable member of the squad.

He shone brightest in the memorable 4-3 win at home to unbeaten Man City in January. Supporters were concerned as Van Dijk missed out through injury, but the Cameroonian stood tall.

It just has to be the last-gasp winner at Burnley on New Year’s Day.

The Estonian’s poached effort sparked scenes of unbridled joy in the away end at Turf Moor, and felt like a pivotal moment in the top-four battle.

Robertson has been one of Liverpool’s best signings in many years, and he has already matured into possibly the Premier League‘s best left-back.

For all his on-the-ball class, the Scot’s one-man press in the 4-3 victory over City will live long in the memory. It outlined why he is so popular.

Moreno started the season as first-choice left-back, and it is easy to forget how well he was playing before injury.

Like Gomez, the Spaniard excelled most in the mauling of Arsenal, providing consistent quality and energy up and down the left flank, and defending well.

Being an understated figure, not many headline-grabbing moments stand out for Henderson, but his expertly taken effort away to Leicester was a key moment in the game as Liverpool won 3-2.

It was his only goal of the season.

Liverpool’s departing German proved to be his side’s most important midfielder on a number of occasions, not least in the 4-2 victory over Hoffenheim in the Champions League play-off.

The 24-year-old scored twice on the night, and his second goal finished off a stunning team move.

It felt like an eternity for Wijnaldum to score his first away goal for Liverpool, but he chose an incredible moment to open his account.

The likeable Dutchman headed home in the semi-final second leg against Roma, putting Klopp’s men 7-2 up on aggregate and on their way to the final.

Milner was exceptional during the back end of 2017/18, proving himself to be a key figure in Europe in particular.

His ninth assist in the Champions League, at home to Roma, broke the all-time record in an individual season, which was quite an accomplishment.

After a tough start at Anfield, Oxlade-Chamberlain became a key figure before injury ended his season prematurely.

The midfielder’s unstoppable 25-yarder against City in the quarter-final first leg was one of the great Kop end strikes in Europe.

It was an injury-plagued season for Lallana, who struggled to enjoy any individual moments of note.

A decent second-half cameo against Swansea City on Boxing Day is about the best we can think of.

It was disappointing to see Coutinho jump ship midway through the season, but his brilliance should not be ignored.

There were outrageous strikes against the likes of Leicester, Newcastle United and Swansea, but his hat-trick against Spartak Moscow at Anfield stands out most. He was majestic that night.

The images of Salah leaving the Kyiv turf in tears were heartbreaking, but what a remarkable season he produced.

It is almost impossible to pick out one moment, but if push came to shove his dinked finish away to City in the Champions League felt particularly huge. The celebration wasn’t bad either.

Honourable mentions must go to his Roma double, the four goals against Watford, the wonderful solo efforts at home to Everton and Tottenham and the long-range strike at home to City, among many others.

Scoring a Champions League final goal should be a best moment for any player, but Liverpool lost so we’re going for something else for Mane.

The hat-trick away to Porto in February was special, with his thunderous third of the night capping off a wonderful individual display.

Firmino was second only to Salah as Liverpool’s star man in 2017/18, creating brilliance week in, week out.

The Reds’ subtle genius produced a delightful chipped finish in the famous 4-3 triumph over City, which just edges out his stunning back-heeled assist for Salah at Southampton.

After enduring such an injury nightmare, seeing Ings score his first goal in the whole of Klopp’s Liverpool reign, away to West Brom in April, was a nice moment.

Much like Ings, Solanke went almost the entire season without scoring, but he finally registered for the Reds with a great strike at home to Brighton on the final day of the Premier League.

His celebration said all you needed to know about what it meant to the youngster.

Sturridge’s time at Liverpool is surely up, having struggled for playing time before being loaned out to West Brom in January.

The 28-year-old did contribute one key goal in 2017/18, though, opening the scoring nervelessly at home to Huddersfield Town in October.