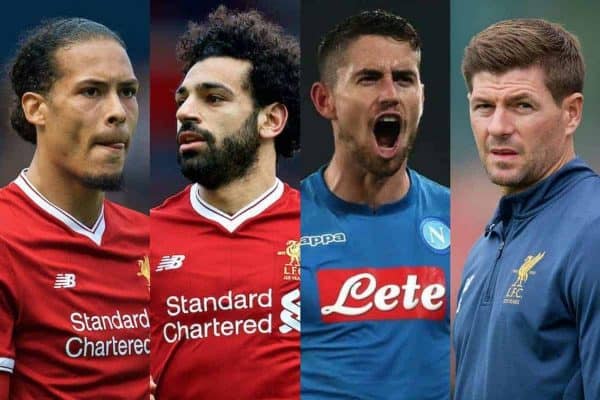 We round up the latest Liverpool news and transfer rumours on Friday, as Jurgen Klopp prepares his side for a pivotal trip to Chelsea this weekend.

Van Dijk on Living the Dream at Liverpool

Just three months after making the £75 million move from Southampton to Liverpool, Virgil van Dijk is set to start for Klopp’s side in the Champions League final.

The Dutchman’s performances since joining the club in January have vindicated their world-record outlay, taking up a key role alongside Dejan Lovren at the back.

And speaking to the Liverpool Echo after Wednesday night’s 7-6 aggregate victory over Roma, Van Dijk insisted their progress vindicated his decision too:

“I watched the Champions League final in Cardiff last year with a very good friend of mine. To be in the final now, it’s special.

“I was hoping for it but to be there just one year later, it’s amazing.

“It’s crazy, but I think it’s well deserved. We still have games to focus on in the Premier League and then we’ll be ready for Kiev.”

A draw would likely ensure at least fourth, given the considerable goal-difference swing the Blues would have to produce in their following two games.

Klopp is seemingly set to field a full-strength side in the capital, which could include top scorer and ex-Chelsea winger Mohamed Salah—but former team-mate Antonio Rudiger is not fazed, as he told BBC Sport.

“If I play, it will be a direct duel against Salah,” he explained, before adding: “The good thing is I’m not slow!”

The majority of Premier League centre-backs have struggled against Salah this season, with the Egyptian already having scored in November’s 1-1 draw with Chelsea at Anfield.

But Rudiger is clearly confident of shackling a player who he described as “the most polite guy I have ever met,” with niceties saved for after the final whistle.

Speaking at his pre-match press conference at Melwood on Friday, Klopp acknowledged the importance of qualifying for the Champions League in convincing their top targets to sign.

While the manager added that “with the players we talked to [already], nobody has said ‘if you don’t do it in end it’s all for nothing’,” he admitted “specific players” want to compete in Europe’s elite.

One such talent could be Napoli’s Jorginho, who is on the radar of Man City and Man United along with Liverpool, according to the Manchester Evening News.

They claim that City are “favourites to land him,” but reveal that “Napoli believe they could demand as much as £60 million for one of their prize assets.”

Liverpool have already paid at least £48 million to sign Naby Keita from RB Leipzig this summer, but Klopp is seemingly in pursuit of another controlling midfielder to join the Guinean.

Gerrard Wants Skrtel to Join Him at Rangers

The Glasgow side are fighting for a second-placed finish in the Scottish Premiership this season, but will need continued investment to restore their status as challengers to Celtic.

If reports in the Daily Record are to be believed, Gerrard is lining up a move for former Reds team-mate Martin Skrtel.

Skrtel left Liverpool for Fenerbahce in a £5 million deal in 2016, and has made 76 appearances for the Turkish club so far, producing a series of battling displays of late in particular.

But at 33, the Slovak may benefit from a relative step down to work under his old captain at Ibrox.

Neil Critchley‘s Liverpool U23s are set to wrap up their competitive season at home to Chelsea on Tuesday night, as they bid for a positive end to the campaign.

The young Reds will then take on a Panjab FA side at Kirkby on May 14, kicking off at 12pm (BST), as they round off a productive term under the ex-U18s manager.

“It is a real honour for us to be able to welcome Panjab FA for an end-of-season friendly match as they prepare for their upcoming World Cup campaign,” Critchley told LiverpoolFC.com.

“We hope that this is the beginning of a great relationship as we look to promote football for British Asians across the country.”

Critchley could be forced to call upon a makeshift side for this end-of-season clash, however, as Klopp continues to draft the likes of Conor Masterson, Curtis Jones and Rafa Camacho into his first-team squad.