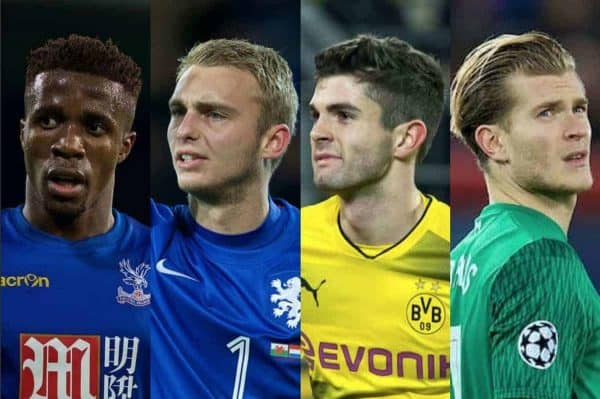 We round up the latest Liverpool news and transfer rumours on Wednesday, with a host of names linked with moves to Merseyside this summer.

Reds Named as Zaha Suitors Ahead of Contract Talks

One of the key areas Jurgen Klopp will be looking to reinforce in the summer transfer window is out wide, with few options to alternate from Mohamed Salah and Sadio Mane at this stage.

The likes of Ryan Kent, Harry Wilson and Sheyi Ojo could be drafted in after their loan spells in the Football League, while Divock Origi could still be given a chance to impress.

But it seems more likely that the Reds will sign higher-quality backup to their first-choice forwards, and Crystal Palace‘s Wilfried Zaha certainly fits the billing there.

According to the Guardian‘s Ed Aarons, Liverpool, Chelsea and Tottenham are all interested in signing the Ivory Coast international.

However, he claims that Palace are looking to tie down their talisman to a new deal in order to ward off suitors.

Borussia Dortmund youngster Christian Pulisic is another player regularly touted as a target for the Reds ahead of 2018/19, with the latest links coming this week.

But according to his father, Mark, speculation over moves to the Premier League are “hogwash,” though he did tell Sky Sports that Pulisic would be considering his future this summer:

“He’s linked with a different club every week. I have no idea.

“His agent right now is working and looking, in close relation with me and Christian, and we’re just trying to see what the best phase of his next development will be.

“But there’s nothing concrete. Right now, Christian plays for Dortmund and that’s where he is planning on playing again next year.”

He also added that Pulisic “always aspired” to play in the Premier League, so there is still hope he could make the switch this summer.

Loris Karius‘ struggles in the Champions League final have been scrutinised heavily in the past days, with many supporters calling for the German stopper to leave the club.

This still seems a knee-jerk reaction after a largely positive six months for Karius, but that hasn’t quelled speculation over a possible replacement.

Alisson is the most likely target, though Roma are reported to value the Brazilian at around £79 million, while Atletico Madrid are hoping to raise Jan Oblak’s release clause to fend off interest.

A new name to emerge on the radar is Barcelona’s Jasper Cillessen, though it has come from a dubious source in Spanish publication Mundo Deportivo.

They claim an intermediary has informed the Liga giants of Liverpool’s interest, though they won’t sell for any less than his release clause, which stands at €60 million (£52.5 million).

Karius faces a long and difficult summer rebuilding his confidence and restoring his reputation, with it as yet unclear whether Klopp will keep faith in his No. 1.

There has been no indication at this stage that he will be sold, but Karius has received a bizarre one-year offer from Serie C newcomers Rimini FC.

The Italian third-tier club’s president Giorgio Grassi wrote an open letter to the ‘keeper, saying he “would like to help Loris become a great example to those who in football, as in life, fall and get back on their feet”:

“I’d like to offer a gift for his [25th] birthday: a year-long contract with Rimini FC, the ideal club to rediscover his calm, self-belief and strength to follow his dreams.

“Let it be clear: this wouldn’t be a walk in the park, because he’d be in competition with a great goalkeeper like Francesco ‘Ciccio’ Scotti.

“But he’d certainly find a big family and a city ready to support him as he got back to being a No. 1 in [Serie C].”

It’s great to see Karius receive such support after his widely publicised nightmare, but it’s very unlikely he, nor Liverpool, will be interested…