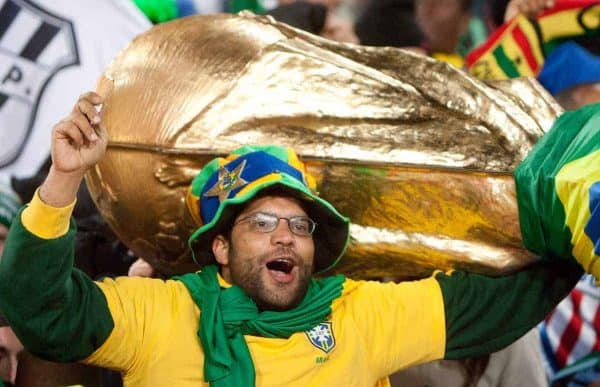 13 players to keep an eye on at the World Cup

The World Cup is a showcase for the best footballing talent around. Here are a number of players Liverpool could keep an eye out for in Russia.

While new talents will emerge during the tournament, it might be unwise to judge a player on one tournament alone.

With this in mind, this list contains players who are already making waves in the game, and would be worth an extra look on the high pressure stage that is the World Cup.

Uruguay are a team to look out for at this tournament, and they have plenty of talent behind their world-class forward line of Edinson Cavani and Luis Suarez.

Rangy midfielder Bentancur is the first of four Uruguayans on this list. He has a wide skill set which he uses to propel his side from central midfield areas towards the opposition box.

His stature has led to comparisons with Paul Pogba, and he could stand out in more ways than one in Uruguay’s midfield this summer.

Where would he fit in at Liverpool? Would add height, skill and forward-thinking to the midfield.

Another midfielder, Golovin is the home nation’s emerging star, and if they’re to progress from their group it’s likely that they’ll be dragged through by the 22-year-old.

He’s a threat from set-pieces as well as in general play, and his versatility has seen him play a number of games on either wing.

He currently plays for CSKA Moscow alongside compatriot Alan Dzagoev, but he is now beginning to outshine his team-mate of whom big things were once expected.

Golovin could eclipse Dzagoev and be the next Russian to make the step into the big leagues.

Where would he fit in at Liverpool? Would be a versatile squad option in midfield with the potential to be a starter.

France’s No. 2 is another versatile player who has played all across the back line as well as in central midfield.

Measuring up at just over 6′ he’s not the tallest centre-back, but is good on the ball and could also do a good job in a back three.

He could go on to be a similar type of player to Paris Saint-Germain’s Brazilian defender Marquinhos, and current club Stuttgart could receive a few bids for his services after the World Cup.

Where would he fit in at Liverpool? Cover across the back four. New Alvaro Arbeloa?

The Brazilian goalkeeper has been heavily linked with Liverpool during the past six months, but the hefty transfer fee Roma are demanding means that the club have looked around at other targets.

Alisson wears the Brazil No. 1 shirt ahead of highly regarded Man City goalkeeper Ederson, so the pressure will be on the 25-year-old to perform in order to keep his place. He seems to be handling it so far.

Where would he fit in at Liverpool? Would be the new first-choice goalkeeper.

Back to Uruguay, and it seems they have finally found their long-term successor to Diego Godin.

It was once Sebastian Coates, who is also in the squad, and could well end up partnering Gimenez at some point, but for Atletico Madrid and Uruguay the 23-year-old is the new defensive warrior.

He’s also decent on the ball when he needs to be, but for now he’ll be learning Godin traits, which are rarer in the game at the moment.

Where would he fit in at Liverpool? A partner for Virgil van Dijk? Atleti won’t let him go without a fight.

At the other end of the scale from Godin and Gimenez, Uruguay will try to accommodate their No. 10 and playmaker De Arrascaeta.

The 24-year-old still plays his club football in South America, for Brazilian side Palmeiras, and could be the perfect foil and ideal provider for Suarez and Cavani.

He scored an eye-catching goal in a recent friendly, laid on by an equally impressive Suarez assist. He’s played from either wing as well as a false nine, but is best when roaming in attacking midfield positions.

Where would he fit in at Liverpool? A wildcard alternative to Nabil Fekir?

Speaking of Fekir alternatives, Portugal’s Fernandes could be another option for the role, particularly now he is looking to terminate his contract with Sporting.

In terms of like-for-like he is close to Fekir positionally and technically, but he’s right-footed rather than left.

Where would he fit in at Liverpool? Would add creativity to the midfield and attack.

One playmaker who might fit the bill from a left-footed standpoint is Ajax and Morocco attacking midfielder Ziyech.

The 25-year-old is widely considered one of the best players in the Eredivisie, and could make a move soon.

He has a tendency to try a few too many long shots, but like Philippe Coutinho he could be lethal from this distance if the skill was honed.

Where would he fit in at Liverpool? Fekir-lite?

Torreira is one of the most highly regarded defensive midfielders playing in Europe, and has been linked with a number of teams already this summer.

The Uruguayan spent last season at Sampdoria, where he initially interested Serie A opponents, before word spread across the continent.

He’s a diminutive midfielder which leads to descriptions such as ‘combative’ and ‘dogged’, but he also has good passing ability and can create from deep.

Where would he fit in at Liverpool? Much more than the new Mascherano.

* Update: Torreira looks to be on his way to Arsenal.

Moving to the north of the South American content, and to the area of Colombia which is almost Central America, you reach Cartagena, the birthplace of Barrios.

The defensive midfielder has since moved south and now plays for Argentinian giants Boca Juniors, but should he get game time at the World Cup he’ll be interesting numerous clubs in Europe.

Given his competence in the position, he could do a job for most teams and even those at Champions League level.

A emerging 24-year-old who could raise a few eyebrows this summer in Russia, and would be the more-than-able Torreira alternative in defensive midfield.

Where would he fit in at Liverpool? These players would rotate with Fabinho or allow the Brazilian to play further forward—or join them in a double-pivot which could do everything.

PSV Eindhoven fans would dispute the claim that Ziyech is the best player in the Eredivisie, and would be convinced that it is their Mexican attacker Lozano.

More than a winger, the 22-year-old scored 17 goals in the league last season, and along with his eight assists steered PSV to the league title ahead of Ajax.

Like Ziyech with Morocco, the extent to which his star rises at this tournament will depend on whether Mexico get out of their group, but either way he will be able to test his skills in a high-profile game against Germany.

Where would he fit in at Liverpool? An Eredivisie gamble which could pay off.

When Lionel Messi wants you in the side you must have something about you. Another Boca player, Pavon could make a few appearances for Argentina after the unfortunate injury to Manuel Lanzini.

The 22-year-old plays mostly as a right winger, but has also played the odd game in the centre and on the left.

“I’ve found a new partner in Pavon, he’s a really good player,” Messi explained ahead of the tournament.

“He’s very quick and is different to what we have in the squad. He’s not only really quick, but his decision-making is also excellent.”

Where would he fit in at Liverpool? Messi’s mate, and a much-needed option on either wing for Liverpool behind Salah and Mane.

Made the big move from South America to Barcelona around the same time Coutinho moved to Catalonia.

Was tipped for big things but hasn’t had a fair chance to shine at Barcelona, and was unfortunate to be present in the only game they lost in the league last season.

Due to non-EU player limits, Barcelona could be looking to offload the lanky, marauding centre-back this summer, and this competition could be his shop window.

At 23 he’s far from inexperienced, but still needs games in Europe in order to adapt. Goal threat from the back.

Where would he fit in at Liverpool? Alongside Van Dijk.