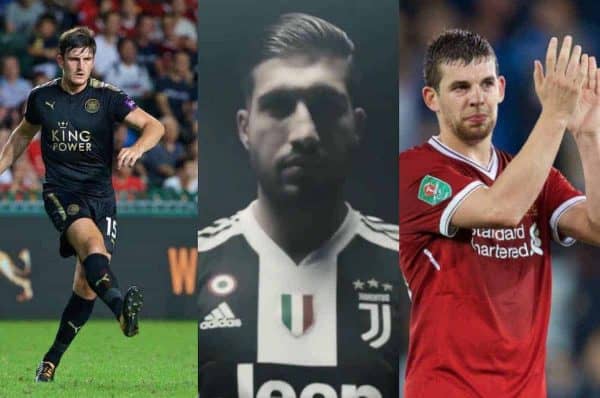 We round up the latest Liverpool FC news and transfer rumours on Thursday, as Dejan Lovren prepares to take on Lionel Messi.

Lovren shone in Croatia’s World Cup opener against Nigeria on Saturday, helping them to a comfortable 2-0 win.

In Messi, the Liverpool centre-back comes face to face with arguably the greatest player in history on Thursday, as Croatia face Argentina.

Lovren told reporters that he revels in taking on such greats of the game, though, as was the case in the Champions League final last month:

“We know how to play against the big teams and we are not scared of them.

“They have maybe the best player in the world in Messi, but Iceland showed how to defend against him.

“It’s an honour, of course, to face him. In the Champions League final, I played against Cristiano Ronaldo, two weeks ago it was [Brazil’s] Neymar, now it’s Messi.

“That’s something you want to do from childhood.”

Lovren has been in good form since the turn of the year, but this will be a major examination of his credentials.

Emre Can‘s Liverpool exit has been one of the worst kept secrets for months now, with it clear the German wanted a move elsewhere.

His switch to Juventus has taken an eternity to be completed, but it is now finally official.

The 24-year-old underwent his medical in Turin on Thursday and agreed a four-year deal, as his time at Liverpool comes to an end following four seasons on Merseyside.

It remains a strange decision to leave the Reds at such an exciting time, but Can is sure to excel with the Serie A champions.

Forsberg Hints At Move Away From RB Leipzig

The Reds need to boost the attacking depth within their squad this summer, with Mohamed Salah, Sadio Mane and Roberto Firmino requiring more rotation next season.

Someone who was linked with a move to Anfield in January was Emil Forsberg, with the forward a key man at RB Leipzig along with incoming Liverpool recruit Naby Keita.

Speaking to Fotbollskanalen, Forsberg admits a new challenge would appeal in the near future:

“I’m ready for the next big step. That’s going to be very interesting.

“I am in dialogue with RB and always had a good relationship with the club. I have the dream of playing for the strongest clubs in the world.”

In many ways, Forsberg ticks all the boxes when it comes to a new attacking signing.

He may well be content with not starting every week for a club of Liverpool’s stature, despite being 26, and he would be a more than useful squad member.

The Sweden international is currently at the World Cup, giving us a good chance to assess his qualities.

Harry Maguire enjoyed an impressive season at Leicester City and a largely commanding performance for England on Monday also caught the eye.

The 25-year-old has been tipped for a move away from Leicester in recent times, and the Guardian claim there is interest from Liverpool.

The report also suggests the Reds are still monitoring both Newcastle United’s Jamaal Lascelles and Burnley‘s James Tarkowski, with Jurgen Klopp seemingly keen on keeping an English nucleus at the club.

There are slight doubts over whether Maguire is consistently good enough to play for Liverpool, but he is arguably superior to Lovren and is still learning his trade.

? #RangersFC can announce that Jon Flanagan (@jon_flan93) has become the club’s seventh signing of the summer on a two-year deal.

Having been released by Liverpool, Jon Flanagan has been looking for a new club and his future has now been resolved, with his move to Rangers confirmed on Thursday.

Strong rumours surrounding a move to Ibrox emerged recently and having conducted his medical, the 25-year-old signed a two-year deal.

It means Flanagan links up with former Reds teammate Steven Gerrard, as the Liverpool legend continues to snap up individuals from his former club.

Flanagan made 51 appearances for Liverpool, with his only goal a memorable one away to Tottenham back in 2013/14.

Trent Alexander-Arnold may be with England in Russia, but his brilliant season at Liverpool is still fresh in the memory.

On the club’s official end of season DVD, the 19-year-old has spoken about his goal against Swansea City last December, ranking it higher than his debut effort for the Reds:

“Your first goal for Liverpool, you think that’s [going to be] your favourite one and your best one; that’s how I felt until Swansea, that nothing was going to come close to Hoffenheim.

“But the Swansea goal was, for me, so much better than the Hoffenheim goal, it just meant so much more to me.

“It must have been because it was at the Kop, at Anfield, and I’d dreamt of that moment for so many years then going and doing it.

“When I think about it now it still brings a smile to my face and it’s hard to believe I scored at the Kop end.

“[It was] just an unbelievable moment.”

Let’s hope there are many more stunners to come over the years, as Alexander-Arnold attempts to become an Anfield icon.