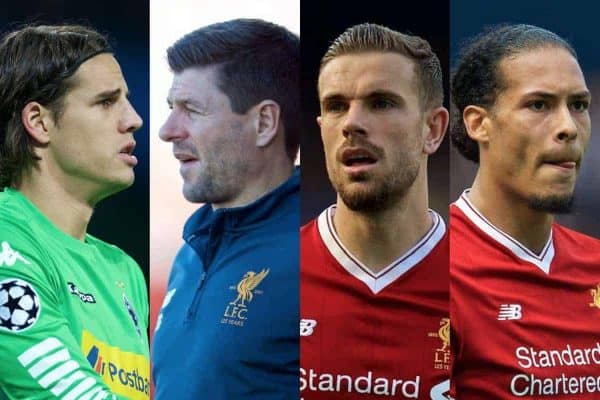 We round up the best Liverpool-related news and transfer rumours on Wednesday, as the Reds’ World Cup players continue to take centre stage.

A different goalkeeper is likely to be tipped to join Liverpool every day until the transfer window closes in August.

Loris Karius‘ display in Kyiv has ensured that, and the likely exit of Simon Mignolet and uncertainty over Danny Ward has further heightened the likelihood of reinforcements.

According to Bild and SportBild respectively, Liverpool are interested in Borussia Monchengladbach stopper Yann Sommer and Werden Bremen’s Jiri Pavlenka.

The 6’5″ Pavlenka impressed in the Bundesliga last season, keeping 10 clean sheets, while 29-year-old Sommer is an experienced figure with 36 international caps to his name.

While both are good ‘keepers, it begs the usual question: are either a significant upgrade on Karius, as someone like Alisson or Jan Oblak certainly would be?

Steven Gerrard is slowly putting the pieces of his jigsaw together at Rangers, and it is no surprise to see him linked with Liverpool players.

Ovie Ejaria has already moved to the Scottish giants on loan ahead of next season, as well as coaches Gary McAllister, Michael Beale, Tom Culshaw and Jordan Milsom, and now Jon Flanagan is set to join him.

According to the Glasgow Evening Times, the right-back is undergoing a medical and is poised to link up with Rangers at their pre-season training camp in Andalusia.

The Scottish Premier League is closer to Flanagan’s level, and he could prove to be a solid signing for Rangers following his release this summer.

Jordan Henderson has been widely lauded for his performance in England’s 2-1 win over Tunisia on Monday night, with the Liverpool captain influential in the middle of the park.

Someone who has continued the praise for the 28-year-old is Gerrard, as he told BBC Radio 5 live:

“I’ve worked very closely with him and not only is he a fabulous player, he’s a great kid as well.

“[He’s] Someone who works so hard at his game, stays behind all the time after training, working on every single department of his game.

“I think with Jordan, when he’s at Liverpool with the armband, people expect him to go and get 15, 20 goals a season [but] he’s not that type of player.

“He’s a workhorse in the middle of the park, he does a lot of unnoticed work, he’s a grafter in there, and at the same time he uses the ball very, very well.

“So if you judge Jordan Henderson on them jobs, what he’s asked to do, he does a fantastic job in my opinion.”

It’s nice to see Henderson being rewarded for an excellent display, with the midfielder so often a figure of ridicule in the past.

Perhaps the widespread audience is beginning to appreciate him slightly more.

Few players have made a greater introduction at Liverpool than Virgil van Dijk, with the Dutchman scoring a late FA Cup winner against Everton on his debut back in January.

Klopp has spoken about choosing to play him for the derby at Anfield, admitting on the club’s end-of-season DVD that it was a risk that ultimately paid off handsomely.

“It was not a tough decision, it was only a spontaneous decision.

“In the morning, I actually thought he will not play. But we had one session in the morning and I came out on the pitch and [said], ‘Ah, come on, why not?’

“It’s not that I didn’t want him to play obviously, we bought him so we wanted him to play. But it was the first game, against Everton, if something goes the wrong direction it’s not a cool start and we want a good start for him.

“But then I thought he’s ready for it, so we did it and it was a genius decision! He scored the first goal, in front of the Kop, so that’s not too bad.”

It wasn’t a bad way for the most expensive defender in the history of football to announce himself to his new supporters.

His towering late header was one of the moments of the season, and the 26-year-old’s influence has only grown from that point on.