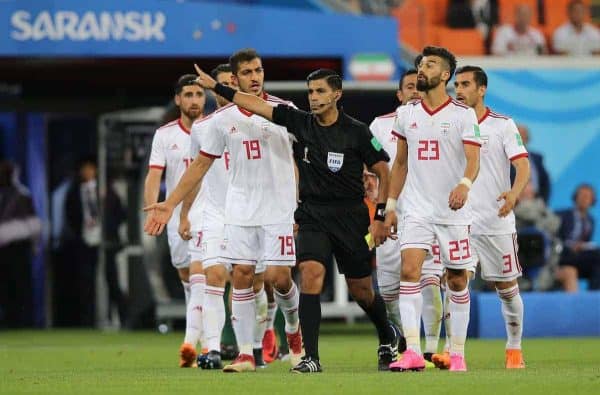 Yet another excellent day of World Cup entertainment saw Groups A and B decided, with VAR again proving to be as big a talking point as the players on show.

There were four matches to enjoy on Monday, as the third and final round of fixtures in the first two groups grabbed our attention.

Uruguay defeated Russia 3-0 to top Group A, Mohamed Salah scored but Egypt lost to Saudi Arabia in a dead rubber, and Spain and Portugal just edged through in Group B.

There was so much to discuss in the latter group, though, on an evening full of drama and controversy.

This has been a tournament full of wonderful individual goals, but Ricardo Quaresma’s beauty for Portugal could be the best of the lot.

The Portuguese veteran’s stunning outside-of-the-foot finish gave his side the lead, in what was, staggeringly, his first-ever start in a World Cup match.

Thank your lucky stars Cristiano Ronaldo didn’t score it – he’d still be doing a lap of honour in his pants!

We all love to gush over the sublime attacking players on show, but it’s time to appreciate two out-and-out defenders: Diego Godin and Pepe.

Uruguay are still yet to concede this summer and Godin has been immaculate at the heart of the defence. He’s the world’s best at what he does.

Meanwhile, Pepe may be a detestable individual, but at 35, the influence he still has for Portugal must be respected. Very few get the better of him.

Put Godin and Pepe together and you would have a superb, albeit incredibly slow, centre-back pairing to get past.

When you watch Egypt, you wonder how on earth Salah managed to get them to the World Cup in the first place. They’re atrocious.

Monday’s gutless 2-1 defeat to Saudi Arabia further enhanced their reputation as the worst side in Russia this summer – yes, that includes Panama – but Salah did at least get his customary goal.

We can now look forward to getting him back in a Liverpool shirt.

Cristiano Ronaldo’s tournament had been very good until his poor penalty, which certainly has to get a mention in the ‘bad’ category.

It was his sixth missed spot-kick in his last 14 attempts, which begs the question: how can arguably the two greatest footballers in history both be so unreliable at kicking a ball into the net from 12 yards?

If the Group A games were relatively uneventful, the carnage that Group B offered up was more thrilling than a Roberto Firmino celebration.

That being said, Saudi Arabia were twice given slightly dubious penalties against Egypt, the second of which was converted, about three hours after the original VAR check.

The much-criticised technology was at the centre of the action all evening, going from the correct to the downright ridiculous.

There were so many VAR-related incidents that I’m genuinely having to double check I haven’t missed something!

Ronaldo won a retrospective penalty which he then proceeded to miss, but Iran’s late equaliser from the spot was a criminal decision by referee Enrique Caceres.

Iranians lying on the floor, Portguese players stomping around in fury, Mark Lawrenson losing his shit over VAR, nobody quite sure what’s going on … best game of the tournament

Our very own Nordin Amrabat shares his views on VAR. #watfordfc
pic.twitter.com/nrh4c12tz1

How he gave handball against Cedric Soares was beyond a joke, and had Mehdi Taremi scored a winner in the dying seconds, Pepe and his Portugal colleagues would have been eliminated, no doubt hunting Caceres down with a pitchfork in the process.

Ronaldo could also easily have been sent-off after an altercation with Alireza Beiranvand, but was subsequently given a yellow card.

In the other game, former Liverpool corner-taker supremo Iago Aspas equalised in stoppage time – a decision that was correctly overturned after VAR noticed he was onside.

On the whole, it was a farcical night with regards to VAR – it is going to be the talking point until the next batch of fixtures.

An in-form Dejan Lovren is back in action on Tuesday as Croatia take on Iceland.

That is a dead rubber in comparison to the huge Group D clash that accompanies it, with Argentina needing a win against Nigeria to reach the last-16.

Earlier in the day, Australia must beat Peru and hope France defeat Denmark, if they are to have any chance of progressing to the knockout stages.