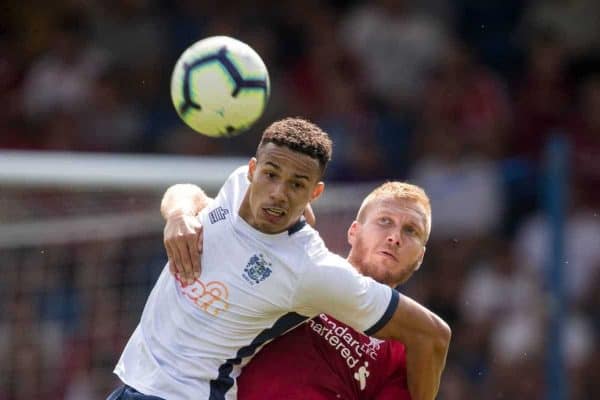 Liverpool’s third pre-season friendly of the week produced little entertainment as the Reds drew 0-0 with Bury on Saturday afternoon.

Jurgen Klopp opted to start Loris Karius in goal, explaining that the under pressure German ‘keeper will play more than 45 minutes, and then Danny Ward will play against Blackburn on Thursday.

Ward therefore ill get tested against a stronger opponent. Karius had very little to do, but was clearly annoyed when the home crowd teased him as the ball got near him in the first half.

In truth, the first 45 was very pre-season, very little action. Daniel Sturridge and teenager Curtis Jones were the sharpest players for the Reds.

But Klopp looked sometimes unhappy at some careless passes. It happens in pre-season but the boss is demanding.

Divock Origi, playing on the left of the front three, squandered the best chance for Liverpool. Sturridge had an effort blocked on the line, while Sheyi Ojo should have perhaps done better with an effort when he cut inside.

At the other end, a mistake from Alberto Moreno almost allowed the League One side to take the lead.

Klopp made 10 changes at the break, with Karius receiving a warm applause from the travelling Reds as he took his place in goal for the second half.

Bury hit the post shortly into the second half, with the defence being split open when high up, and then a scuffed shot eventually hit the woodwork.

Liverpool’s best chance arrived just before the hour after good work by Rafa Camacho – enjoying a run in attack rather than the unfamiliar role in defence he played diligently against Chester and Tranmere – set up Ben Woodburn, but his shot produced a good save.

Karius made way on the hour in a pre-planned sub, with young Polish keeper Kamil Grabara entering the game.

Bury had the ball in the net from a free-kick but it was ruled offside, while Joe Gomez had a decent chance but completely mishit hit shot for the Reds.

The second half played out much the same as the first, lacking in quality and very, very pre-season affair.

Where Curtis Jones was the bright spark in midfield in the first half, Naby Keita was in the second.

While it is only pre-season, some players who need to impress failed to do so; primarily Lallana, Solanke, Origi and Woodburn.

Next up is the final domestic friendly, at Blackburn on Thursday night.