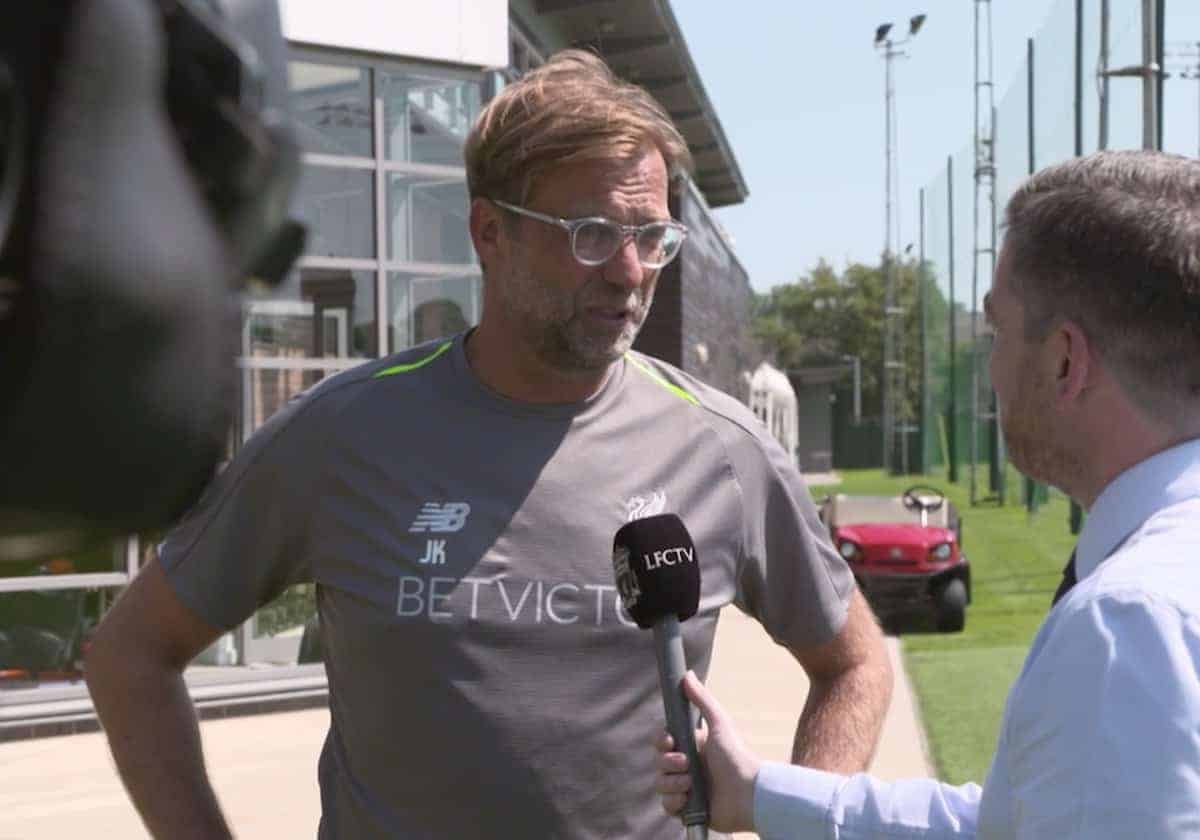 Jurgen Klopp has hailed the presence of Naby Keita, Fabinho and his players returning from injury, as he plots a productive pre-season with Liverpool.

The Reds are back in action on Saturday as they take on Chester at Deva Stadium, and began training at Melwood on Monday morning.

Klopp saw 28 players onto the pitch in West Derby, including new signing Keita and Fabinho and the recently recovered Joe Gomez, Joel Matip and Allan Rodrigues.

Nathaniel Clyne and Adam Lallana, who spent the majority of last season on the treatment table, also took part in a series of fitness and endurance tests.

With nine friendlies to come, 10 players yet to return and two more sidelined through injury, Klopp will be running the rule over his remaining squad during a busy summer.

And speaking to LiverpoolFC.com he hailed the arrivals of Keita and Fabinho, who will almost certainly take up key roles this season:

“[I’m] very, very happy to finally have Naby here. It took a while.

“Fabinho is also here and that’s perfect for the moment.

“It’s even better they can start from the first day with the training because they have to learn the most, they have to adapt to our style of play.

“We have nine games until the season starts and we will need them all. They all are important in a different way. The absence of Gomez and Matip in the closing stages of last season was a bitter blow to Klopp’s plans, forcing the manager to draft in academy centre-backs Nathaniel Phillips and Conor Masterson.

Both underwent surgery that ruled them out of the most important stage of the campaign, but were a welcome sight as they took to Melwood on Monday.

Klopp claimed their presence was “like a transfer,” as with Clyne’s improved fitness and the availability of the likes of Harry Wilson and Divock Origi after loan spells:

“Joe Gomez was out for a long time, but he was out in a very decisive period in the season after a very good season which he played, so it’s very good to have him back.

“It’s fantastic to have Joel Matip back, especially because Dejan is still at the World Cup and we wish him all the best for that.

“There’s no problem with having a final of England against Croatia! That’s the situation [and it’s] really cool.

“Clyney was already involved again in the last part of the season, but of course he’s as well like a new addition to the squad. Liverpool finished fourth in the Premier League last season, and reached the final of the Champions League, but ultimately ended 2017/18 with no silverware.

With another packed schedule to come, Klopp insisted the time spent on the training field in pre-season will be crucial to building a platform for success:

“It’s an intense time, but of course a very, very important time.

“You know how the season is, we don’t have a lot of time to do proper training in the physical department over the season, so we have to set the basis now.

“That’s what we will do, we’ll not start like crazy because the boys had not the longest holiday in the world but they had a holiday so they need to get used to the boots again, that’s how it is.

“Whatever they do [during the summer], it’s not on a football pitch, it’s not in football boots.

“So it’s a lot of running, athletic work, stuff like that and then we start involving the football again.

“And first of all [we need to] reach the level we had last year and then try to improve from that point. So far, so good and how I said, let’s go.”

After the weekend’s trip to Chester, the Reds take in further domestic friendlies against Tranmere Rovers, Bury and Blackburn, before a tour of the United States.