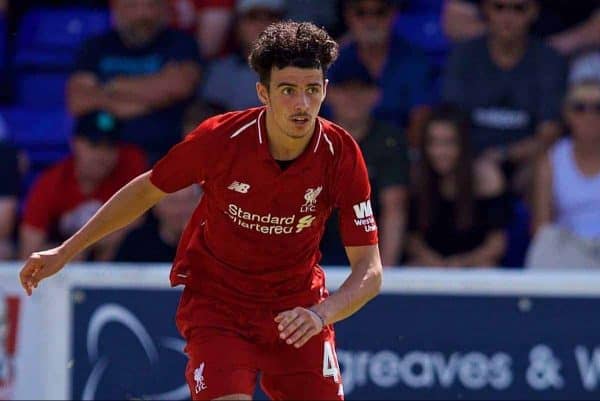 “Kid is one hell of a player,” “Was expecting at least a goal” – Fans react to Bury 0-0 Liverpool

Liverpool failed to find a breakthrough against a spirited Bury outfit as they played out a 0-0 draw, but fans remained optimistic over the showing of one particular youngster.

The Reds’ third pre-season outing failed to reap its rewards on the scoreboard but their League Two opponents provided yet another stage for Jurgen Klopp‘s youngsters to impress and his senior charges to gear up for the season opener.

A poor opening half saw Liverpool’s attack struggle to effectively link up, and while sweeping changes at half-time saw an increase in tempo, a breakthrough failed to arrive at Gigg Lane.

Here is how supporters reacted to Liverpool’s goalless draw on Twitter and our forums.

In a quiet opening period, Curtis Jones continued to impress and look at home within the senior setup…

If Nabil Fekir is even half as good as Curtis Jones we need to sign him up.

Curtis Jones off target from distance. He's been bright and busy, backs himself on the ball which is great to see in one so young. Pretty low-key half generally from #LFC

Curtis Jones’ body feints should be illegal. Kid is one hell of a player.

“Curtis Jones also looking very handy so far in pre-season. Could definitely be one to watch.”

Been super impressed with Curtis Jones so far this pre season, definitely one to watch for next season!! #LFC

Enjoyable watching Curtis Jones. Always scanning, positionally aware, good passing range, intelligent movement, wants the ball, defensively diligent, has the proclivity to make the right decision rather than the one that looks most flash. #LFC

Curtis Jones looks so comfortable on the ball, quick drop of shoulder to change directions, has the defenders on strings, something Coutinho did so well. #LFC #LFCPreSeason

Divock Origi on the other hand, didn’t impress…

Divock Origi doesn’t even look like a footballer at the moment. He’s regressed dramatically over the last 18 months.

Abject half, but it happens. No need to worry, unless you're Divock Origi – this pre-season is probably his last chance to impress, and he's doing the exact opposite of that against teams he should be bullying.

Poor half from LFC. Origi couldn't cross his legs at the moment..

A goalless first 45 minutes arguably as poor as the second half against Tranmere midweek. Origi not comfortable wide left & looks low on confidence after squandering a one-on-one, @LFC's best chance

Pedestrian half from LFC. For someone who’s suppose to have a point to prove, Origi doesn’t look arsed one bit

There were mixed reactions to the performance and result and the hope will be for improvements in future games.

I know it's preseason and all that jazz….. but I was expecting at least a goal from Liverpool against a team that's shipped 10 in their last two games.

“A good run-out for the players, a magnified training session. But credit to Bury for defending well all through the match.”

Hope in Your Heart on the forums.

Well that was shite but it is preseason. All about getting fit. Onwards we go to Blackburn! #LFC #LFCFamily #Liverpool

“I wouldn’t call it dull it was a good run out for our new signings and younger players; also Lallana looked great and full of energy. It would have been nice to have got a couple of goals but it wasn’t to be. Overall though there was some great link-up play and we created some fine chances and it gives us reason to be excited for the new season #YNWA”
Chris Parker on Facebook.